Trending
You are at:Home»THEATRE»THEATRE: BREAKING AWAY, AND OTHER SPECIAL ONE-NIGHT-ONLY PROGRAMS AT THE WALLIS, UPCOMING AND PAST
By Karen Salkin on March 2, 2020 · THEATRE

BREAKING AWAY, AND OTHER SPECIAL ONE-NIGHT-ONLY PROGRAMS AT THE WALLIS, UPCOMING AND PAST

I’m not really reviewing this one show, per se, (even though there was a super-special aspect, for me, to the reading of Breaking Away. But I will get to that in a minute.) I’m more making you guys aware of all the specialness that my favorite theatre in Los Angeles, The Wallis, has to offer.

I try to attend all the plays, dance shows, and musicals that are presented in both theatres in that same building. But this venue is just as known for their one-off events, (such as live readings and musical performances,) which are usually produced by or with their community partners, and are on offer for just one night, (as opposed to having a run.) 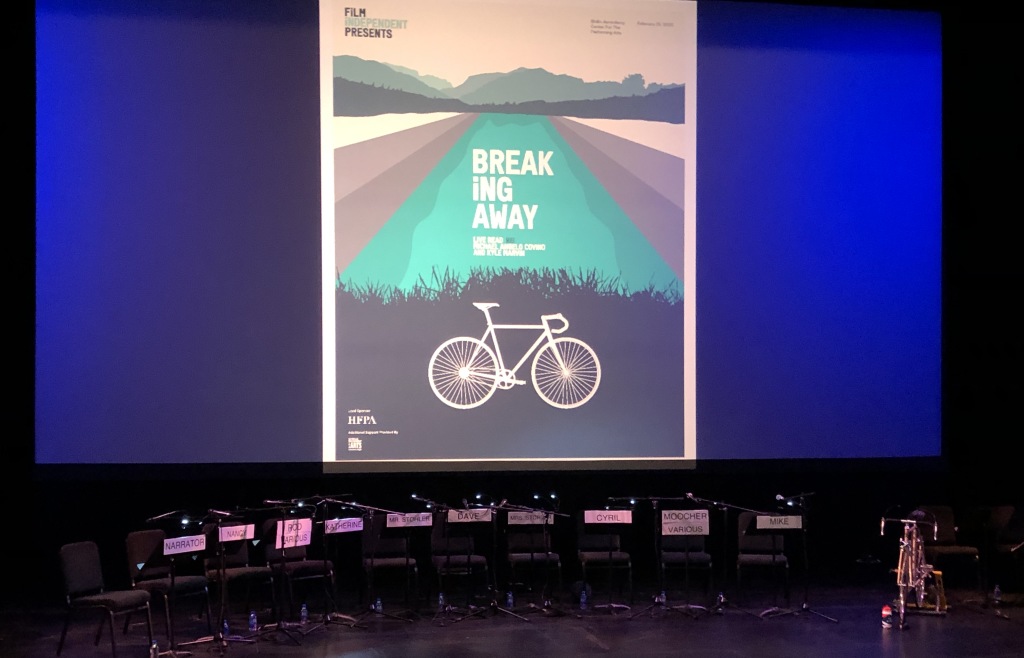 The pre-show stage. Photo by Karen Salkin. (The photo at the top of this page is by Kevin Parry.)

In all these years, I had been to only one of those, a very interesting Shakespeare Jubilee to celebrate Brit Week. (As many of you know by now, I’m more often than not overbooked, so I’ve, sadly, missed the rest of The Wallis’ one-night-only offerings.)

But I cancelled everything last week for a reading of the 1979 movie, Breaking Away, the moment that I heard that Taika Waititi, who had just won the Oscar for Best Adapted Screenplay, (for Jojo Rabbit, which he also starred in,) would be taking part! What a coup for Film Independent Event, (who produced this special event,) to have gotten him for their event! (I believe he was a last minute add, and boy, were they lucky to have him! He added sooooo much to the proceedings.)

Up until a few months ago, I had never even heard of this dude, (when I saw his beautiful film in December,) but now I’m his biggest fan! And his performance in this reading was just as special as I expected. I love a person who does not let me down!!!

So Taika was the carrot that drew me to The Wallis, but once I was there, I appreciated all the interesting aspects of the entire performance.

The cast (and audience,) giving respect to Paul Dooley at the end. (Taika Waititi is the one in the hat.) Photo by Karen Salkin.

Since I had never seen the movie, I had no idea what Breaking Away is about, but I knew it was a classic. Even so, although the narration itself was quite wordy, I was able to get the gist of the action as it went along. (Stills from the movie being projected on a giant screen behind the actors totally helped.) 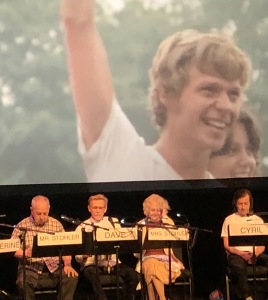 This is so interesting to me–there’s Dennis Christopher on the big screen, starring in the movie back in the day, and him now, (second from left, with the goatee and glasses,) doing the reading as the same character! Wow. Photo by Karen Salkin.

Okay, here are the touches that made this presentation so special: The film starred Dennis Christopher, with Paul Dooley as his father. And guess what? They both reprised their roles for this reading! That was wonderful! Nonagenarian (he just turned ninety-one) Paul not only still speaks as perfectly strongly as he always did, but his delivery, of every single line, was spot-on! His own cast gave him a standing ovation at the end! And the packed house gave him the biggest ovation of the evening, both before and after! (I knew him slightly a hundred years ago because we both hung-out in the Robert Altman gang. But, trust me, Paul was waaay more popular with them. As always, that’s another story for another time.)

Speaking of other stories, I’ve also met Dennis Christopher a few times, because when I first got to LA as a teen-ager, I’d always notice him driving a small classic car I coveted, a Metropolitan. I didn’t even know he was an actor—I just found-out his name because I wanted to buy that car from him! (Which, of course, with the $200.00 I arrived in town with, I could not do. But a girl can dream.) And when I bumped into him last year, he told me that he had owned three of them!!! How jealous am I?!

I also have to give props to my fellow Capricorn, K Callan, for reading the role of the mother so well. (To save you guys from making yourselves crazy, the role was played by Barbara Barrie in the film.)

On top of all that excellent casting, an adorable guy came out every now and then and rode a stationary bike that was right on stage, (because bike races are the major plot-line.) Man, was that a highlight for me! (I tried to find-out his name, but was not successful—he may be hiding from me! Good call.) 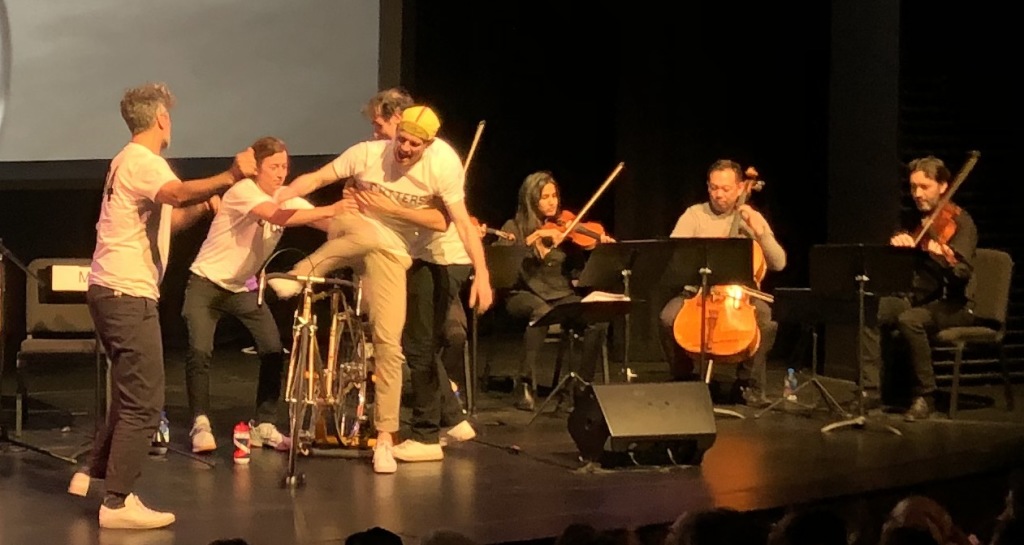 Members of the cast interacting with the cute guy on the bike. Photo by Karen Salkin.

And there were musicians—the Lyris Quartet—on stage, as well, accompanying some of the action with their gorgeous live music! Their too-brief performance was worthy of their own night at a theatre! They lent so much to the proceedings.

I was also impressed with that the audience was just about full, on what my little mo would have referred to as “a plain little Tuesday night!” It warmed my heart to see that so many Angelenos are interested in the arts.

And The Wallis is the perfect place for that appreciation!

So that you don’t miss any more of these special one-night-only events, (including Al Pacino reading The Basic Training of Pavlo Hummel on March 8, which is already sold-out, but there’s a waiting list you can join,) check-out their site right here: www.thewallis.org.