Trending
You are at:Home»THEATRE»THEATRE: BOB BAKER MARIONETTE THEATER’S THE CIRCUS ON PLAYHOUSELIVE
By Karen Salkin on October 2, 2020 · THEATRE

As you know by my very many theatre reviews in pre-pandemic days, I’m a major fan of live productions. Many of us in that world have been mourning the loss of them since March, and are praying for the days when those beloved presentations will reappear. Sadly, I can’t imagine that live theatre will return until April 2021, (and I’m afraid that’s being very optimistic.) 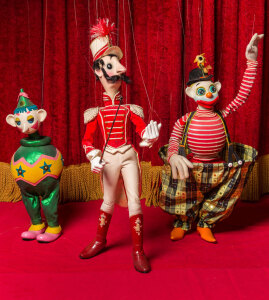 Photo by Ian Byers-Gamber. [The big pic at the top of this page is by Claire Vogel.]

For the past several months, I’ve often been invited to view shows on-line, but none have ever interested me until this one–the Pasadena Playhouse’s newly-launchd PlayhouseLive’s presentation of Bob Baker Marionette Theater’s The Circus. As a former circus girl myself, the title got to me right away. And I was already a fan of the Bob Baker Marionette Theater. So this one had my name on it.

And possibly yours, as well—the upside of the loss of live theatre is that, with on-line formats such as this one, everyone can watch shows now! We can all share the experience together, no matter where we are in the world!

I watched Bob Baker Marionette Theater’s The Circus with Mr. X the other day, and at points along the way, I was cheering just like a little kid watching a real circus! Besides watching the actual marionettes, it’s fascinating to watch the humans work them. The art of puppetry is much more intricate and precise than one would think if they were just seeing them on a stage where the artists are in black in the background.

This show was first performed by the this iconic troupe back in 1948! So it starts off a tad slowly, but if you notice that, too, please stick with it because it gets really fun. (And it runs less than an hour.) 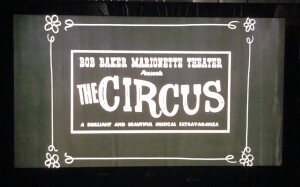 One of the opening images from the show on PlayhouseLive, pictured here on my own television. Photo by Karen Salkin.

The actual production that PlayhouseLive is showing was filmed at the company’s own theatre three years ago, so, in all honesty, the production values are a tad less than optimum. But, especially as a former elementary school teacher, I think it’s great for kids to see such old school, unadulterated entertainment. I so appreciate entertainments like this one.

The Circus is perfect for very young children who are aren’t yet jaded by the digital world, and for fun-loving grown-ups. I think everyone will find some comfort in this lovely, classic old-fashioned presentation.

My two favorite “acts” came in the second half, which seemed to have a bit more happening in it than the first. [Note: There are not two official “halves”–I’m just guessing that they were past the halfway point.] One was the “quick-change” artists. I actually laughed out loud at what they were doing. They could have kept going with it all day, as far as I’m concerned. 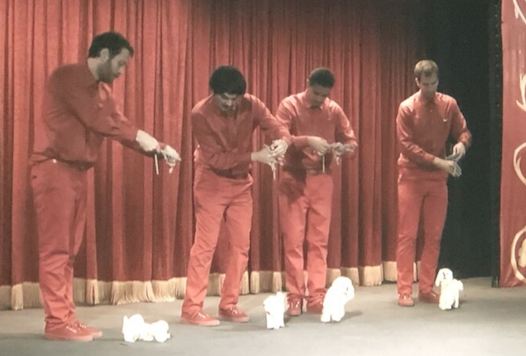 And even better was the darling group of charming, white, fluffy pups, who all looked like little versions of my own beloved best friend, Clarence! I giggled and applauded all through their adorbs act.

I was bemused a bit with some of the questionable music choices. There are several pieces of appropriate (and not, in two cases,) old show tunes, so I suggest you keep Shazam handy! I had fun discovering some songs I was not familiar with. (They’re all more modern than 1948, but still old.)

And all this delightfulness happened on the PlayhouseLive platform! Even though it just launched this week, it looks like it will be so successful that I feel this may be the way to go much of the time even after the world returns to normal. For that to happen, there, of course, will be many factors to weigh. The only negative is that viewing a play or musical on a device, even if you can get it to play on a big-screen TV, is far from the magical experience of sitting in a theatre, watching actors work in person, especially if it’s a musical. But there are soooo many positives to watching on-line! First and foremost, it’s so much less of a time commitment–there’s no hour (or two, if you’re me,) to get ready, and no two hours (average) of travel to and from the theatre. Best of all, there’s no having to deal with the noise, perfume, opening of candy wrappers, talking during the performance, coughing on you, etc., of your fellow audience members. Watching at home is Mr. X’s dream come true!!! 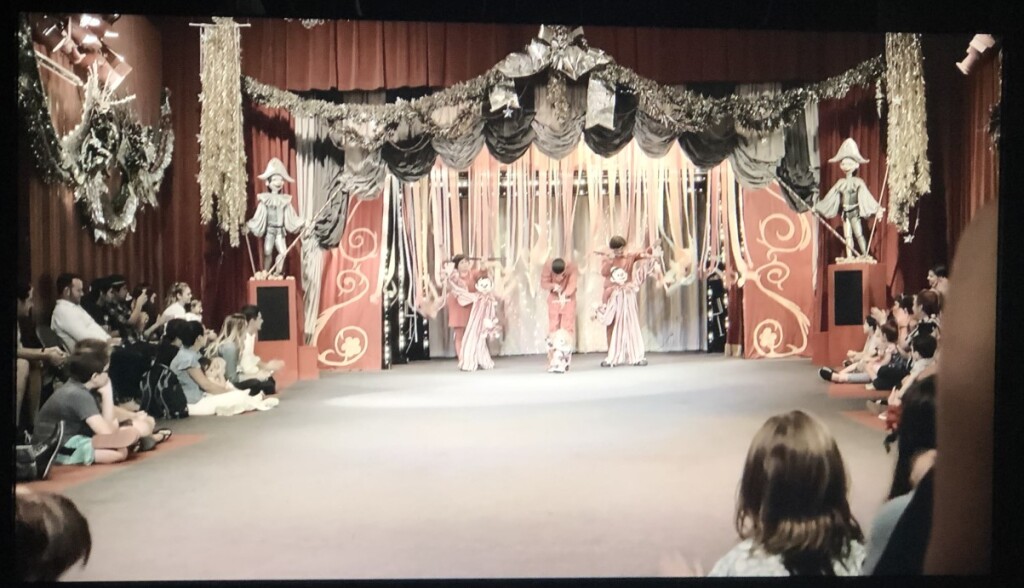 The view of The Circus on my big screen TV. Photo by Karen Salkin.

Bob Baker Marionette Theater’s The Circus on PlayhouseLive was my second such experience, (the first being the only time I’ve seen Hamilton,) and it was a really good one.

So, if you’d like to follow suit, just check-out their full schedule of on-line events right here: www.playhouselive.org. And then get into your pajamas, (or stay in them, as the case may be,) and enjoy!