Trending
You are at:Home»THEATRE»THEATRE: BLUES FOR AN ALABAMA SKY
By Karen Salkin on April 18, 2022 · THEATRE

BLUES FOR AN ALABAMA SKY

First of all, it was wonderful to be back in the Mark Taper Forum!!! I appreciated everything about the experience, from even parking at the Music Center to having our vax cards* checked to picking-up our tickets at the Press Table to (and especially) hearing so much live laughter again! *[Note: I’m thrilled that the Taper is one of the theatres that requires its guests to show proof of full vaccination, and masks are required at all times. That makes me feel safe enough to attend again.]

The play that got me back there is Blues for an Alabama Sky, directed by actress Phylicia Rashad, who originated the role of Angel in the play’s 1995 world premiere. A fun trivia note is that she and the playwright, Pearl Cleage, went to college together back in the day. I love connections like that! 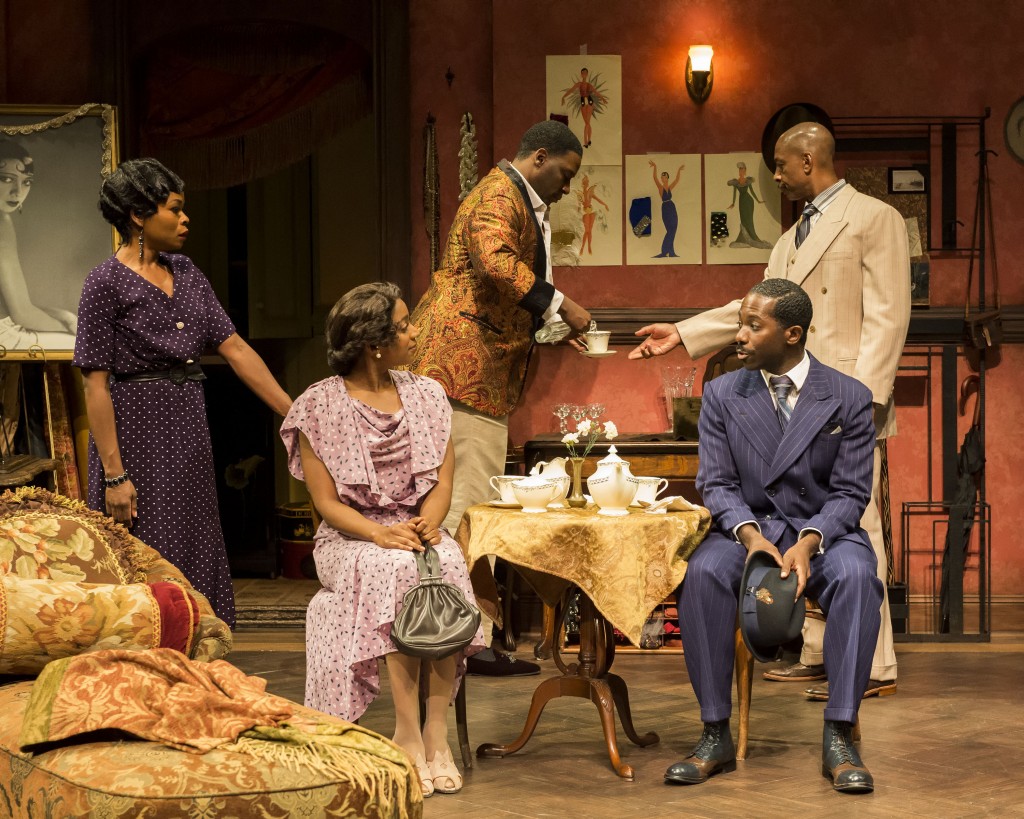 (L-R) Nija Okoro, Kim Steele, Greg Alverez Reid, Joe Holt (standing,) and Dennis Pearson. Photo by Craig Schwartz, as is the one at the top of this review.

I really enjoyed the play, but it took me a minute to get into it—I couldn’t figure out what was happening at first. But once I got it, I was with them all the way.

I had no idea that Blues for an Alabama Sky is so funny. I had expected a moody drama for some reason, (even though I knew absolutely nothing about the show going in,) so discovering that it’s mostly a comedy (for about 7/8 of the time) was a happy surprise for me.

But I still had a feeling of impending doom all night. [Skip down two paragraphs if you don’t want any plot spoilers.] And, of course, I was correct. I always want you to experience a show for yourselves, so I rarely tell you of any of a show’s action, but I also feel I have to prepare you for some late sadness. When one character showed a gun at one point, I quietly said, “Uh-oh,” to which my friend Marc whispered back, “That might not mean anything.” So I had to break the news to him that whenever there’s a gun in a play, someone is going to use it.  I just wish I had not been correct in this case.

But the journey up until that point is so enjoyable that I still highly recommend seeing Blues for an Alabama Sky. (And there is extreme happiness for at least one character, so there is that one upbeat turn of events toward the end.) 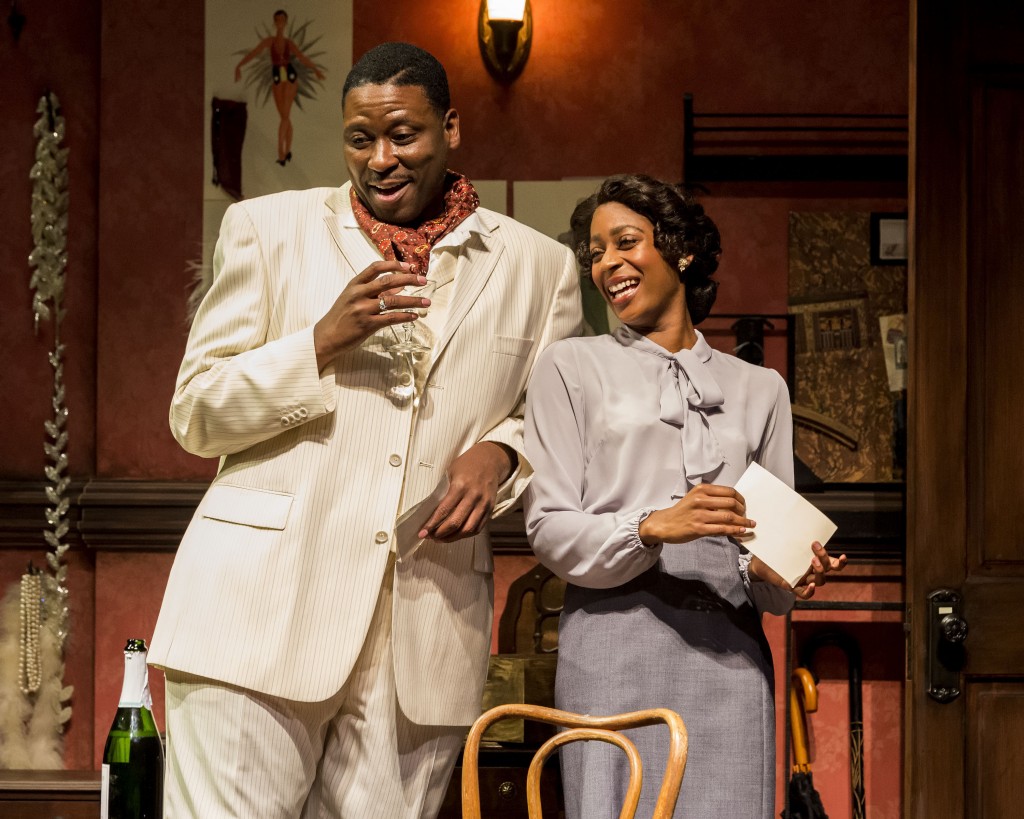 Blues for an Alabama Sky was first produced in the ’90s, and takes place in the ’30s, but very sadly for the world, all the issues explored are still as relevant today!

At intermission, Marc said, “I know it’s the ’30s, but it’s the same problems we have today—abortion, financial depression, hatred of gays, etc.” And I’m adding stranger danger. This play made me realize the perils of dating someone not known to even one of your friends have always been there, not just in this on-line age. (But I guess some of my teen-age years should have taught me that lesson!)

As for the cast of this five-person play, (which includes Joe Holt, Dennis Pearson, and Kim Steele,) there is not a weak one in the bunch. But the stand-outs are the actors playing the two main characters. Greg Alverez Reid is just about perfect as Guy, the gay costume designer bestie of the central girl. I have a feeling his role is the most popular one with audiences in every production of this show, when played right, and that was definitely the case at the Taper on opening night—the crowd went nuts for him! He hits every note in just the right way, without overdoing any part of it. 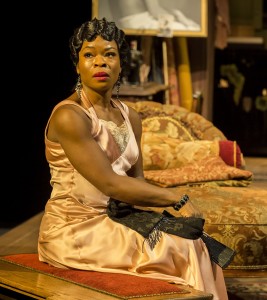 And not only does Nija Okoro, who plays the central figure Angel, a now-out-of-work blues club singer, bring life to her hilarious-yet-tragic character, but I could not stop being uber-jealous of her super in-shape arms!

The script of Blues for an Alabama Sky consists of basically one great line after another. One that really resonated with me is when Guy says to his very straight-laced female next-door neighbor, “You’re going to have to get over those primitive ideas you have that the world closes down from 10PM to 7 AM!” That’s what I’ve been trying to tell my friends for decades now!

Another line I loved is when someone mentions something that happened a couple of weeks earlier, and Angel says, “That’s too new to count as a memory.” The most serious one, though, is great advice for all us vain folks, “I don’t want to work so hard on my body that I forget about my soul.” Amen to that!

I also admired John Iacovelli’s set of two apartments across the hall from each other, with the Harlem skyline on a backdrop above it. Years ago in New York, a very elderly relative of a friend of mine had left her one of the gigantic and old-fashioned houses that are mentioned in the play, and I had the privilege of exploring that time warp. This scenery brought me right back to it. It’s such a simple set, yet so perfect. It tells us everything we need to know about the occupants, and it definitely sets the mood from the get-go. 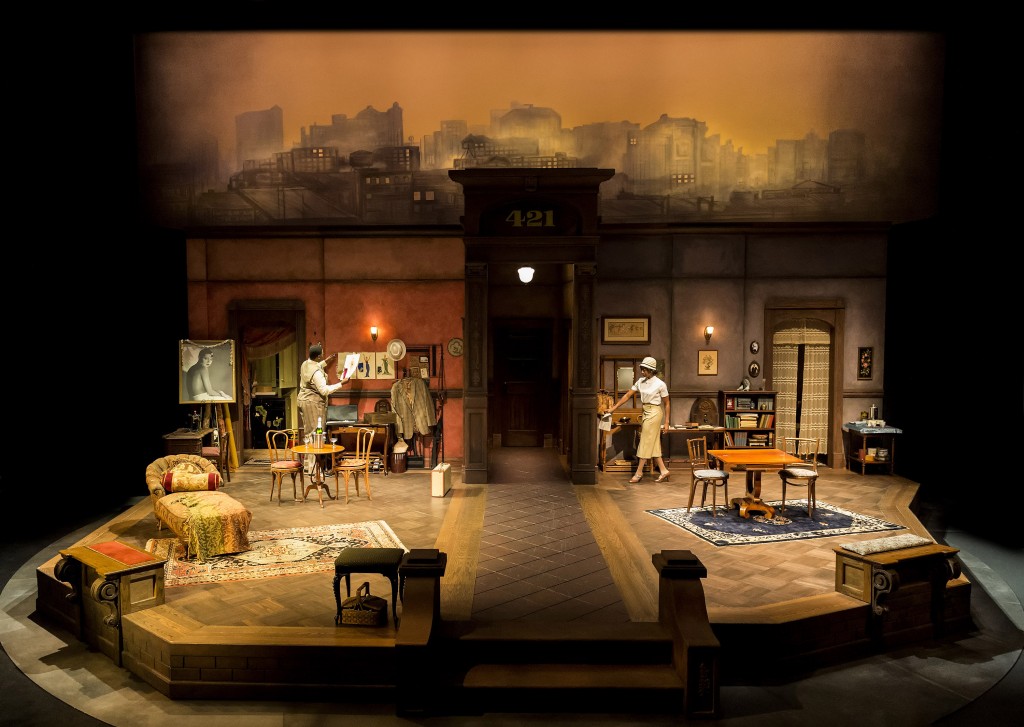 On a side note, Marc and I lost a lot of the lines because we were sitting in a side section. I’ve rarely sat anywhere but dead-on to the stage in the Taper, so I never noticed that little glitch in the acoustics before. So either that was to blame, or the actors swallowed their words on occasion. I heard a lot of, “What did she say,” whispers in my area, so it wasn’t my hearing going bad. (Thank goodness.) So I heavily suggest that you choose a center seat for this production, if you can. I think that will greatly enhance the experience, which is already wonderful enough, even with not being able to make-out all of the lines.

Lastly, I just have to say that my very first professional theatre experience when I moved to LA as a teen-ager was at this theatre. So I’m thrilled that it’s still turning-out such quality presentations for us. I forgot to appreciate that until having it taken away for these past two years. I’m so happy that the Taper and I are back together.