Trending
You are at:Home»THEATRE»THEATRE: APPROPRIATE
By Karen Salkin on October 9, 2015 · THEATRE

It’s taken me the whole four days since the opening night of Appropriate to gather my thoughts on this one. So I’m sorry to all the people around town who keep breathlessly asking me for my thoughts on it. I’ve rarely had so many questions about a theatre piece, but I guess none of us can figure it all out on our own this time.

So, I’m reviewing it with several unconnected musings because trying to piece them all together here is almost as exhausting as the play was. (Which is not to say I didn’t like it; read on.) 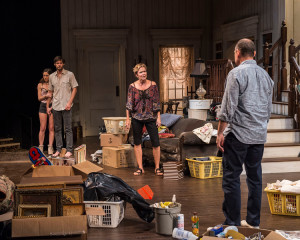 The real heroes of this new play at the Mark Taper Forum are the stagehands and props people, with an assist by the Mimi Lien, the set designer (whom I’m sure the workers must hate by now! If you see the show, you’ll understand of what I speak.) The design is wonderful. It’s the most complicated set, and even moreso for the props, I think I’ve ever seen. I wish I had stayed in my seat for the first intermission to watch them change the set decorations; that might have been even more entraining than the show itself!

I have to leave the analyzation of exactly what is going on, and what it all means, to others; I’ve yet to figure out my own siblings’ mishegas.  I’m just here to discuss the entertainment factor of the play, which is high, with a big side of confusion.

I don’t usually tell you the plot of a play, because why ruin the story for you, but here it’s a necessity. Three grown children gather at the family’s plantation in Arkansas, (which they used as a summer home, back in the day, but the patriarch wound-up living there in recent years—don’t ask,) to sell it and his possessions, and divide the profits. And, it turns-out, loads of secrets abound. Duh.

I don’t really understand this esoteric title. Nothing about the scenario is “appropriate,” except for the excellent casting by Meg Fister. Each actor really did seem to fit his or her character to a tee.

I’m shocking even myself to say this, but really liked the teen-age girl, Grace Kaufman, which is very unusual for me. But she was spot-on. She was just being her character, without all the pretension that most young actors and actresses exhibit. I hope she stays this way. She could wind-up being the next Jennifer Lawrence, who was also very natural at such a young age.

The wardrobe, by Laura Bauer, is also perfect all-around, (especially the shorts-only on the rippled body of Robert Beitzel! ) There is one glaring exception, though–the horrible ill-fitting, super nerdy shirt and shorts on the older sister, Toni, in the (possibly) final scene. What the heck was that? She looked so much better at all other times. No woman can have one such fashion faux pas.

I get that the lighting has to be dark occasionally, to go along with the story, but it was really uncomfortable that way. 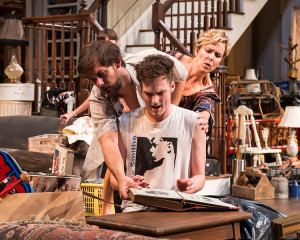 The play is actually good, but waaaay too long, with waaay too many monologs while the rest of the cast stands around. (Despite what it says in the program, they needed two intermissions, which is rarely fun.) And in that final-ish scene, Melora Hardin, (playing Toni,) stops at every period, which I believe we all learned to not do in Acting 101. (Many actors appear to have been absent that day, though, so she’s not alone.)

I spoke to several people after the show who are more intelligent than moi in these areas.  (Yes, even with my 147IQ, I do bow to many others to interpret these dramas.  My literal-thinking mind needs every word spelled out, so I know the entire story, no mysteries left.)  And in this case, I understood neither the title or the ending.  But I discovered nor did they.

There was also way too much yelling for some of us. Actually, according to just about every audience member I chatted with, most of us. My guest was particularly bothered by it. I think the dialogue would have been much more effective if more of it had been just spoken, rather than yelled.

But, the journey was a fun, albeit disturbing, one.  There were lots of laughs in the middle of the disfunction, which really lightened the experience for the viewers. Lots of laughs. Playwright Branden Jacobs-Jenkins injected much humor into the pain.

One weakness of the story is that the exact truth about the horrible-seeming secrets never get exposed.  I wish those situations had been explained much more, especially the plight of the the youngest sibling, Frank. They really gloss over that one!

Misery does seem to love company, though, so seeing all these plays and movies about uber-dysfunctional families (this is the eighteenth one I’ve seen in the last nine months alone!,) always makes me feel not so alone in my personal plight in that arena. At least this trio was working on emptying-out the house together, which is something I can only imagine. 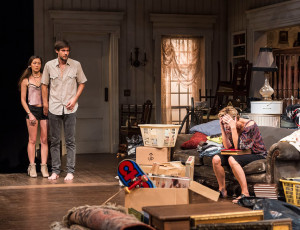 This is one time I encourage you to read more reviews of Appropriate if you’re as confused as I. Just know that I enjoyed the ride, if not the results, (which I still don’t know what they are.) And the actual ending doesn’t really help clear anything up.

As entertaining as it all was, though, on several levels, there was one major flaw with the storyline itself: I find it hard to believe that the patriarch was a full-on racist, and even possible Ku Klux Klan member, without bringing his trio of offspring into those disgusting beliefs, especially in Arkansas.  Those people are proud of their sick ways, and always want the children to follow in their footsteps.  So that part of the narrative didn’t ring true for me.  Evil animals like that aren’t ashamed of their actions, they’re righteous about just how correct they are!