Trending
You are at:Home»THEATRE»THEATRE: AND THEN THERE WERE NONE
By Karen Salkin on October 23, 2012 · THEATRE

AND THEN THERE WERE NONE

Yet another well done show from Glendale Centre Theatre!

This is always the most easy-going theatre experience. When invited to accompany me there, some of my friends, (the ones not in the know,) balk at the prospect of driving to what they consider “too far away.” But it’s really not, especially if you go on a Saturday or Sunday. It’s actually quite a quick, easy drive from any part of town. And parking is close, plentiful, and simple. And the audience is far from judgmental; you can go casually-dressed and even sans make-up, and no one will care. We’re all there just to have an entertaining evening of theatre.

Be aware of this interesting side wall featuring the "little Indians." Photo by Karen Salkin.

And that we did at the opening of Agatha Christie’s venerable And Then There Were None. [Note: it’s sometimes called Ten Little Indians. You don’t even want to know her original title! I can’t write it here, but if you look it up, prepare to be shocked!) I read it when I was a kid, and have seen at least one old movie version of it, but still I was riveted to this production. I honestly couldn’t figure out, or remember, “who dun it!”

The action takes place in the living room of an estate on an island in Great Britain, and has an eleven-member cast. And that’s all I’m telling you about this murder mystery, that has some humor to it, as well, because I don’t want to spoil even one second of it for you. Just trust me when I say that if you enjoy this genre, (who doesn’t?,) it’s a fun play to see. And it’s not one that’s done often so this would be your chance.

Photo of the fabulous set by Karen Salkin.

As usual with this company, the acting and direction are excellent. And also as usual, I loved the set. They outdid themselves on this one! It’s a hard show to stage, I’d imagine, and it’s done perfectly at Glendale Centre Theater.

Even the English accents, which usually bother me on American actors, were a non-issue. And there were two cast members who looked like they stepped out of on old black-and-white film! Paul Michael Nieman even sounds just like Herbert Marshall! As a major fan of old movies, I found his voice very comforting, in a way. I was happy every time he had something to say. And Thor Edgell is the perfect “handsome man!” His looks are appropriate for that time, (the action takes place in 1944,) but I could definitely see him as a suspect on shows like The Mentalist now. 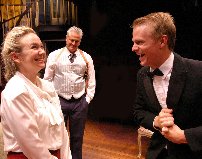 Even though those two were the stand-outs for me, all the casting was great. In a play with so many roles, I’ve rarely seen it gotten so right. Props to them for that. (“Props” meaning “congrats,” not stage props. I don’t want to get my less-jargon-savvy readers confused.)

Even though this theatre isn’t a repertory company, they use many of the same actors time after time; it’s kind-of fun to see them again, in different roles. (The good ones, that is, which actually, is most of them.)

Two notes for this show: the first is—don’t be late! You want to see this one from the beginning! And secondly, I’m reminding you to dress in layers. I’m usually hot, but I get freezing in this theatre. If you ask, they do turn the air-conditioning down a bit, but the actors also need to be comfortable, especially in their heavy 1940s attire, so just bring a jacket. And gloves!

And if you know who the killer is, keep it to yourself! The fun is watching the action unfold.

And Then There Were None running through November 17, 2012
Glendale Centre Theatre  324 N. Orange Street  Glendale  818-244-8481 www.glendalecentretheatre.com