Trending
You are at:Home»THEATRE»THEATRE: AN INSPECTOR CALLS
By Karen Salkin on January 25, 2019 · THEATRE

I love a good mystery. And that’s exactly what this classic play from England is.

On the surface, An Inspector Calls is the riveting story of an Inspector’s interrogation of five members of a wealthy English family in 1912, over the death of a pretty young working-class girl, whom they all claim not to know.

I’m sure there’s a much deeper meaning to it all, being British and written (in just one week, I might add,) in 1945, during the war, but, with so many problems in today’s world, I just don’t have the patience to go there. So I took this one on face value. I loved the set, the performances, the occasional humor, and the discovery of just what happened to the poor girl. 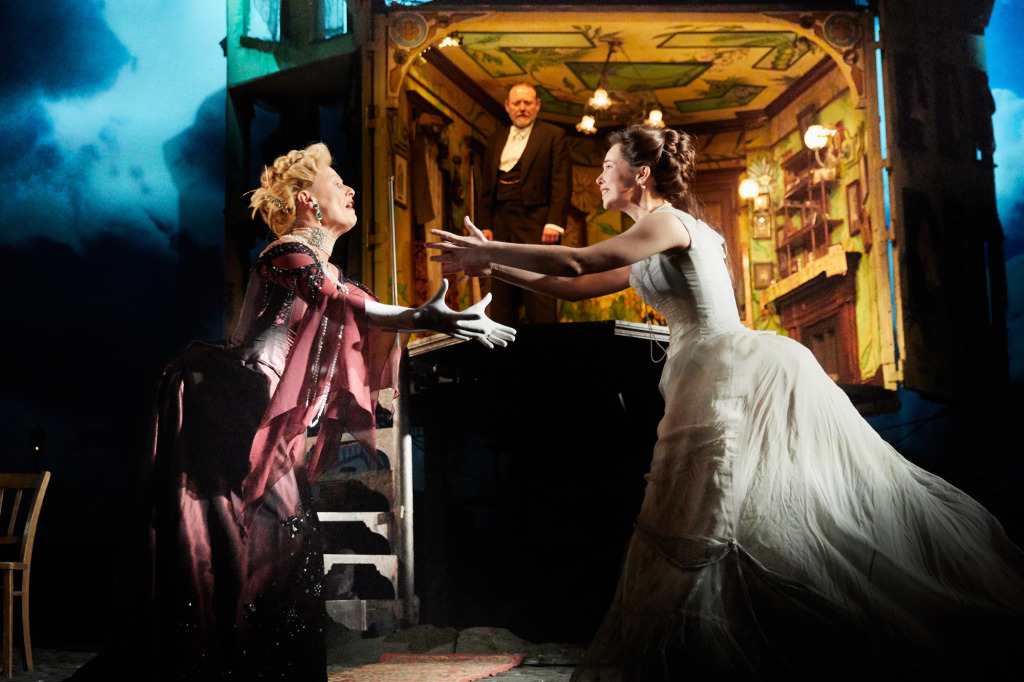 Christine Kavanagh, Jeff Harmer, and Lianne Harvey. Photo by Mark Douet, as is the one at the top of this page.

And it’s all made even better by the perfect, comfortable seats at the Wallis, of course. (Not to mention that we were sitting a row in front of James Franco and his girlfriend, who was wearing boots I was in love with!)

I had seen An Inspector Calls at the Ahmanson Theatre in the late ’90s, but that was in my clubbing days, so all I remembered was the set. (And no–“clubbing” is not a euphemism for “drugs!” It just means that I was out late every night, dancing and hanging with my posse.  So events that began at 8pm, three hours before we usually even started to get ready to go out, didn’t have my complete attention back then.) So I’m thrilled that I got to see this show again right now, when I’m more present in life.

An Inspector Calls is performed in one hour and forty-five minutes with no intermission, but I was never bored nor antsy, which is a rarity for me.

The way the action unfolds had me thinking that Inspector Goole is an old-timey British version of American TV’s Detective Columbo. But, since J.B. Priestley wrote it in 1945, it’s the other way around. I really do wonder now if Columbo was based on Goole! (Wikipedia says no, but I’m not convinced.)

I believe this is the first time I’ve ever seen the curtain closed at the beginning of a presentation on the Wallis stage, but when the Ian MacNeil-designed set was finally unveiled, I totally understood. I was bowled over by the visuals. I have no idea how the original 1945 staging was done, (which actually opened in Moscow because all the theatres in England were already booked,) but this is the way director Steven Daldry conceived it over twenty years ago, for a revival. You have to see it for yourselves to really appreciate the brilliance; the first ten minutes or so are a dinner party done in a tiny closed dining room, high above the stage floor of the cobblestoned streets of England. We can see bits of the participants, and hear them all, but that’s it.

The show could have easily been done on a traditional drawing room set, which would have made it easier to watch, but I really applaud the bold, creative choice of this brilliant design. The only problem for me is that I was sitting pretty close-up, (very happily,) so the realistic mist of the foggy night was making my hair frizz! 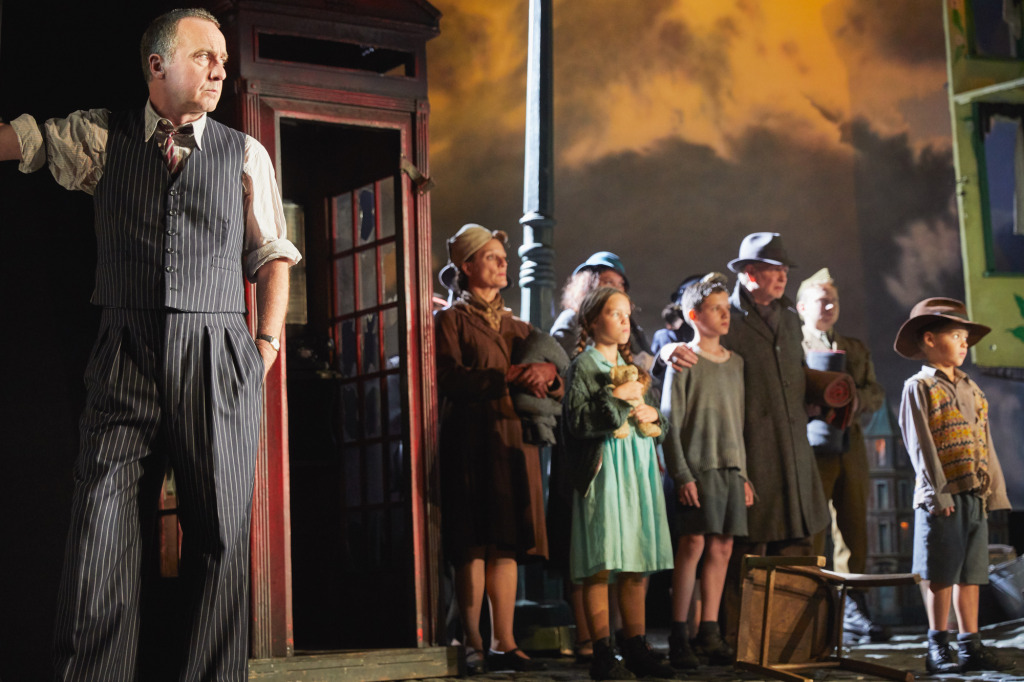 Liam Brennan as the Inspector, on the left. Photo by Mark Douet.

Every member of the cast is perfect, (although I still haven’t figured why all of a sudden, there were about a dozen “extras” toward the end. That seemed unnecessary.)

It turns-out that all the actors have extensive credits in Great Britain, but have never worked on this side of the pond! Not being familiar with them actually made the production a bit better because I was able to concentrate solely on their characters, and not their outside lives, as I often do when I know who actors are. So let me laud them all now, with high hopes that I see their work again, no matter where: Lianne Harvey, Hamish Riddle, Andrew Macklin, Liam Brennan, Christine Kavanagh, and Jeff Harmer. 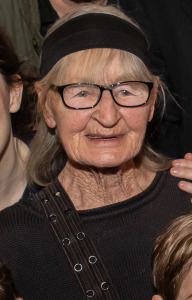 And when I read the program later, I discovered that Diana Payne-Myers (what a wonderful name, right?,) who plays the family’s maid, (a strictly movement part, which is good since she’s a decorated dancer,) is ninety-years-old! And she’s lifting chairs and buckets and doing tons of business all the time! How impressive is that?! What an inspiration. I now have a new idol! (Sorry, Ruth Bader Ginsburg.)

In real life, I’m always fascinated by how things are connected, and also at the chain of events, and An Inspector Calls has all that. (Here’s an example from my life of what I mean: If I hadn’t chosen my first college, and then dated my theatre professor there, which got me friendly with another of his students who was coming out here to LA for the summer and told me to come visit him, which I did, and I got here just in time to see Mr. X on stage and fall in love with him from afar, and then I met people in that play, who brought me on stage for the last night, (long story,) which is how I met Mr. X, I would have never stayed in LA—to work hard on getting him to be my boyfriend—and my current life would have been totally different!) So I really loved watching the Inspector unravel the chain of events in this play, which are somewhat more dramatic than my own timeline. (But not totally—you have to wait for my play to discover all that. Only mine will, for sure, have no mist!) 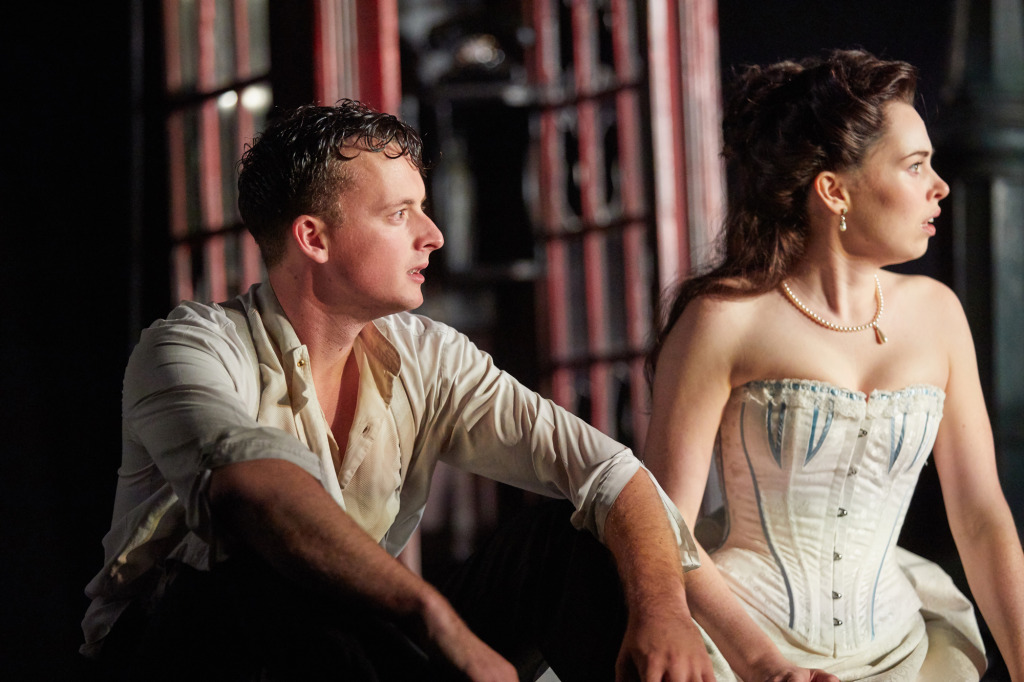 Highlighted in the narrative of An Inspector Calls is just how spoiled and high-and-mighty this upper-class family is. And lest you think that this extreme level of being spoiled is mainly fictitious, I’m here to tell you that it is not. I had a really good friend some years ago who called me one day to tell me that it had been “the worst day” of her life. I panicked, thinking something horrible had happened to her. But it turned-out that she just could not find a dress for a black-tie event! I kid you not. And the daughter in this play totally reminded me of that little episode.

Let’s not forget the many technical aspects of this production. I enjoyed the mysterious music that underscores some of the action. It gives the show a movie quality at times. (And, I noticed, keeps some audience members awake.)

I also admire the artistic lighting, but darkness like that of the first half hour or so just strains my eyes and makes me drowsy. 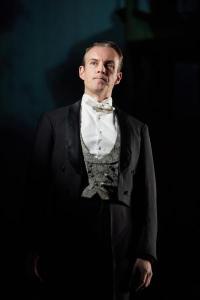 And I do have to admit that the staging is a tad hard to get into, but I’m sure it’s all to accommodate that unique set.

The wardrobe is excellent, but there’s one tiny thing that bothered me a tad. The mother’s dress is stunning, but the beads on the bottom of the back of it make too much noise on the cobblestones, so maybe they should go.

Since this show is a mystery, I kept thinking that the very rude latecomers (some walking down the aisle twenty minutes late!,) were part of the show! That threw me off occasionally.

And, in that mystery category, the ending is, indeed, a mystery to me. (Upon seeing An Inspector Calls right after I saw this year’s film The Favourite, I have concluded that Brits are just not fans of endings.)

So, here’s a bit of a Spoiler Alert: If you don’t want to know what I think the ending should have been, skip down to the info below, followed by a special announcement. Okay, here it is: I thought the Inspector was going to turn-out to be the dead girl’s brother, out for revenge. A few people I told that to liked it better than the original, so, if you do, too, just imagine that to be it.

But there’s no mystery about this—I’ll be live-tweeting the Screen Actors Guild Awards this Sunday, beginning with the arrivals at 3PM West Coast time.  So, if you don’t already follow me on Twitter, this would be the time.  My handle is @Majorcelebrity.  I may even reveal for whom I voted, too, which trust me, no other SAG members do. (Unless they’re trying to kiss a celeb’s butt!  And, in those cases, how honest are they really?)