Trending
You are at:Home»THEATRE»THEATRE: AN ACT OF GOD
By Karen Salkin on February 15, 2016 · THEATRE

AN ACT OF GOD

Dame Edna finally has some competition! But who would have thought that would come in the form of Sean Hayes as God?! (More on that comparison is a minute.)

I love a perfect show! And that’s just what An Act of God is. If you miss it while it’s here in Los Angeles, you’re an idiot. It’s that simple. 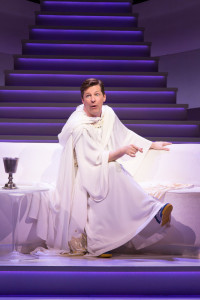 Sean Hayes as God. (Or is it God as Sean Hayes? Hmm.) Photo by Jim Cox.

Actually, I could easily see it again, which is the highest compliment I can give an entertainment event. (The only film this year upon which I bestowed that honor is The Revenant, perhaps the best film I’ve ever seen. So, that’s the size of the praise I’m heaping upon this short play at the Ahmanson Theatre.)

I’m also a fan of funny people. Truly funny people. And the star of the show, Sean Hayes, and the writer, David Javerbaum, are definitely two of those.

An Act of God is virtually a one-man show, starring the incredible Sean Hayes as God. And this is coming from someone who tried to watch a few episodes of Will and Grace back in the day, and hated that show! So, I’m not some biased Sean Hayes fan. I actually wasn’t even very familiar with him until his hilarious recent sitcom, Sean Saves The World, which got the axe way too prematurely, in my humble opinion. It should still be on the air, making me laugh, but then I would not have had the wonderful pleasure of seeing him in this show! So, I guess it worked-out well enough for all of us.

I actually met Sean briefly, at this very theatre, just a little over a year ago, and he told me, “I’m shy.” Well, he doesn’t prove it with this performance! It is anything but shy.

His delivery is spectacular in so many different ways. He adds so many little nuances to the already-brilliant text. Which brings us to the writer, David Javerbaum, who has won a baker’s dozen of Emmys for his work on The Daily Show with Jon Stewart, where he served as head writer and executive producer. An Act of God (which is such a clever title, by the way—it’s a one-act play, of God,) is based on a book he wrote, (which is actually claimed to be written by God and transcribed by David. And I have a feeling he’s sticking to that story.) 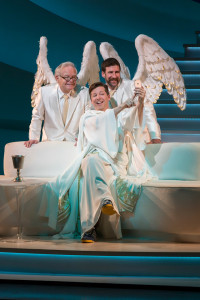 As I alluded to in the opening, the whole presentation reminded me a bit of the ones by my favorite funny person of all time, Dame Edna. Sean does most of the work, but he’s accompanied by two very helpful and supportive “angels,” deftly played by Jimmy Gleason and David Josefsberg. They help make the transitions from section to section of the narrative run smoothly. Those two roles could have been just thankless window-dressing, but the way that the two actors play the parts really does add to the proceedings.

Mr. X (who writes so much better than I do, which I have a feeling you’ll notice in a second yourself) summed it all up perfectly in a mini-review that I noticed he sent to a friend: “A well-deserved standing ovation closed an evening of almost endless laughs seasoned with occasional serious commentary, all wrapped around an extraordinary Sean Hayes tour de force performance. The brilliant writing by David Javerbaum was, to me, comparable to a New Age Mark Twain.” 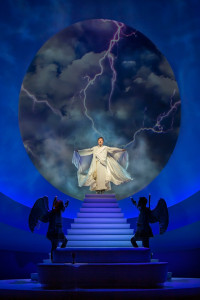 Sean Hayes (in the center, of course) with James Gleason on the left and David Josefsberg on the right. Photo by Jim Cox.

As we left the fun opening night, he mentioned to me, of the other-worldly set and lighting, “The hues change appropriately to enforce the content of the script.” (He also speaks so much better than I do, don’t you think?)

I agree with him on every point, and I’m absolutely in love with the Scott Pask-designed set, which features a regal staircase, a sky with constantly-moving clouds, (whose projection was designed by Drama Desk award winner Peter Nigrini,) and the most gorgeous colored lights I’ve ever seen, whose mouth-watering lighting design is by Hugh Vanstone. I would love those guys (Scott and Hugh are both Tony Award winners, by the way,) to do my house! Or at least let me live in theirs! (Mr. X would love that, too—me living in someone else’s house!)

Actually, every little technical aspect was spot-on. But Mr. X said, “As creative as the set is, the writing is beyond that.” It is unequivocally such a quality production, all the way around. 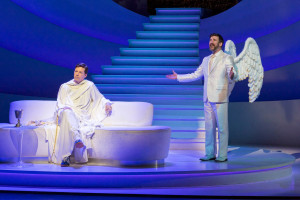 Which brings us back to the content of the ninety minute (hence, no intermission, so do your schmoozing beforehand) laugh riot. It’s God, (who tells us right away he’s here in the being of Sean Hayes,) giving us the lowdown on what appear to be alternate Commandments. (All that was explained at the beginning, but I couldn’t quite follow–I’m not quite up on my liturgy. Let’s put it this way—I panic when I see the category The Bible on Jeopardy. But I can sure run the Beauty Queens one!) You really don’t even need to understand that premise; just listen to everything else he says, and go with the flow. He skewers everything, but it seemed that the “celeb” bits were especially amusing to the opening night show-business-peeps-heavy crowd. (I have a feeling that each performance will include a few up-to-the-minute rewrites of current events.)

Okay, that’s it. I don’t need to tell you anything else. I can’t imagine one person on earth (let alone Los Angeles,) not enjoying An Act of God. (Well, maybe religious zealots won’t like it, but I can’t imagine them.) My only admonishment is: as with Dame Edna shows, you may not want to sit in the first few rows. And if you do, don’t say I didn’t warn you.

[And, on a side note: Please join me tonight as I live-tweet the Grammys. @MajorCelebrity. After all the hubbub about some of my SAG Awards tweets, let’s see if I can tame some of my snark. Do you think I can?]