Trending
You are at:Home»THEATRE»THEATRE: ALADDIN AND HIS WINTER WISH
By Karen Salkin on December 20, 2017 · THEATRE

ALADDIN AND HIS WINTER WISH

Aladdin and His Winter Wish was actually the very first Lythgoe Family Panto that I ever saw, when it was at the Pasadena Playhouse a few years ago. So I’m thrilled for Laguna Beach audiences to have that opportunity this holiday season. 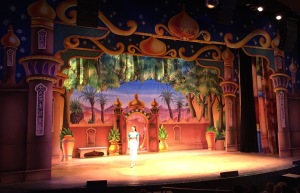 If you’re not familiar with what a “panto” is, you can read the definition in the second paragraph of my recent preview of these pantos, right here: itsnotaboutme.tv/news/upcomingtheatre-lythgoe-family-panto-previews. I’m so glad I had already gotten a peek at what goes into these productions, which I share with you in that article, as well.

Now that I’ve seen several versions of this wonderful form of holiday theatre, I appreciate Kris Lythgoe’s clever writing even more than I already did. He keeps the story familiar to us, while paring it down somewhat and adding amusing new characters, (as in the case of Aladdin’s mother in this one,) and he chooses fun and appropriate popular songs, and gives us so many witty bon mots that adults are as charmed as the children in the audience! It’s true family entertainment! 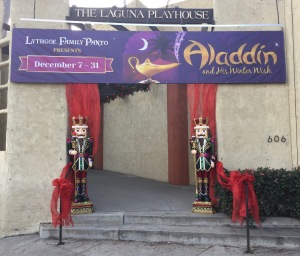 The colorful entrance to the Laguna Playhouse. Photo by Karen Salkin.

Now let me tell you about Aladdin and His Winter Wish in particular. Even though I had seen this show before, it all seemed fresh at this new-to-me venue in Laguna Beach. The entire cast gives it their all, and between the excellent writing, songs with which we can all at least hum along, exciting dancing, and colorful sets by Ian Wilson, it’s a pure joy. Even the gooniest little bits work.

And the use of known music (as opposed to original songs,) seems especially effective in this one. The opening number of Oscar-and-Grammy-winning Jai Ho, (from Slumdog Millionaire,) starts the proceedings off with a bang, and the action never lets up. My two favorite numbers, Bruno Mars’ Treasure and Coldplay’s Vida la Vida, (often referred to as When I Ruled the World,) come at the top of the second act, so the show is very easy to get right back into after intermission, which is not always the case in theatre. 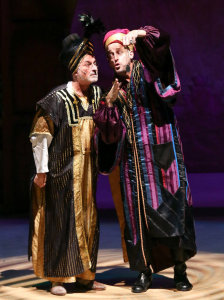 I must laud young Jason Gotay, as Aladdin, for giving us a memorable rendition of the old Eddy Arnold standard, You Don’t Know Me. He has a beautiful voice, and really sells the song, to young and old alike. (But of course Jason is fabulous—he’s a fellow Brooklynite!!!)

My favorite performer is Josh Adamson, as Aladdin’s arch-nemesis, an evil magician who’s trying to marry the princess. I’ve seen Josh in two previous pantos, so I was already aware of how funny and charismatic he is, (and cute, too!,) but I didn’t realize just what a talented singer he is! I don’t know how that fact eluded me before, but it was quite apparent in this show. 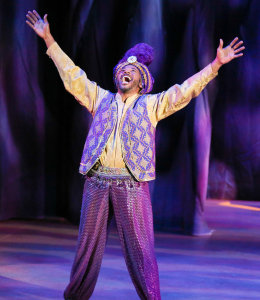 Jay Donnell as the Genie. Photo by Cathy Cunningham.

Josh plays the villain, who all the kids are happy to boo, but they cheer even louder for Jay Donnell as the Genie! And he’s perfect in that part; his performance is joyful and animated and funny without overdoing it. He’s such a cheerful, upbeat person in real life that this role seems to be an extension of his human self. The audience just latches on to his natural happiness.

Jason Graae, as Aladdin’s mom, is also excellent. The role was originally played by my kooky pal Bruce Vilanche, when this panto was in Pasadena a few years ago, and even though Jason also performs the part with a lot of fun camp, he brings the character to life in a very different, perhaps more polished way, of which I’m really a fan. And his “flirting” with the men in the audience is hilarious! 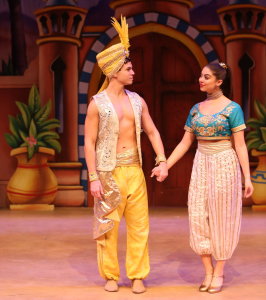 I have a feeling that many of the little girls in the audience were there to see Nickelodeon star Kira Kosarin as Jasmine. Kira is more of an actress than a singer, so I give her a lot of credit for her efforts. And she seems sweet and possesses one of the highest kicks I’ve ever seen! I think her leg gets totally parallel to her body! And she’s a tall drink of water, so that’s even more of an accomplishment.

Barry Pearl and Jason Earles, (yes, there are three “Jasons” in this one show!,) round-out the cast nicely, along with a troupe of all-ages dancers, who are all lovely. But I have to give an extra shout-out to my favorite young dancer, Emily Madden. She has a sparkle that I hope she never loses. 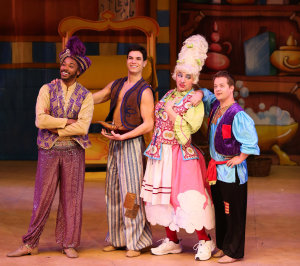 All the “Jason”s and a “Jay!” (L-R) Jay Donnell, Jason Gotay, Jason Graae, and Jason Earles. Photo by Cathy Cunningham, as is the big one at the top of the page.

Speaking of special performers, Musical Director Keith Harrison plays all the music himself!!! That is truly amazing to witness. (I’m glad they keep him highlighted on the side of the stage during the show so you can see him work for yourselves.)

Since this was my first visit to the Laguna Playhouse, (but it will definitely not be my last!,) I also have to laud this charming little theatre. I absolutely loved it! The experience made me hark back to seeing summer stock shows all around the east coast with my parents when I was a youngster. There don’t appear to be any bad seats there, and the vibrant scenery of this show seemed to come a tad more alive on this perfect-size stage.

And I must add that those were two of the most appreciative audiences I think I’ve ever seen! (Yes, I did see it twice. Well, sort-of. Friday night traffic from LA made us a bit late for opening night, so my friends and I went back for the matinee the next day. And guess what? I could still see it again!) 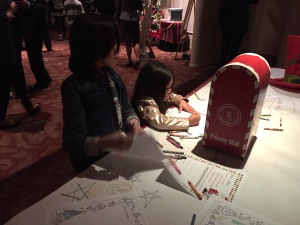 Benjie and Alexa writing their letters to Santa. I hope they put in a good word for me! Photo by Karen Salkin.

There were some special pre-show activities for the kids on opening night, (like crafts and writing Letters To Santa, which my special helpers, Benjie and Alexa, both did,) and I noticed some different ones the next day, so I have a feeling they’re available for all performances.

You have until New Year’s Eve day to see this show, so even if you don’t live in the Laguna Beach area, it will be a wonderful day trip for your child’s Christmas vacation. And it’s just as fun if you’re a grown-up without kids—you can make it a fabulous adventure for yourself in this beautiful beach town. And maybe do as I did—stay down there for the night, and see the panto twice!