Trending
You are at:Home»THEATRE»THEATRE: A SONG AT TWILIGHT
By Karen Salkin on March 26, 2014 · THEATRE

A SONG AT TWILIGHT

This seems to be Noel Coward month for me. After seeing Brief Encounter at the Annenberg a few weeks ago, (if you missed my review, you can read it here: itsnotaboutme.tv/news/theatre-brief-encounter,) which I’ve known only as a favorite movie, I now had the pleasure to see the Pasadena Playhouse production of A Song at Twilight, a play I had never even heard of! I loved adding it to my growing list of works I’ve seen by this most entertaining writer. With each one, I become an even bigger fan. 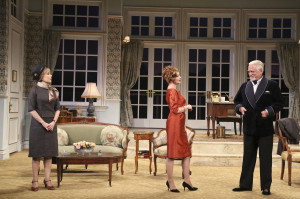 A Song at Twilight is a rather simple one, with just four characters and a single gorgeous one-room set, (by Tom Buderwitz, in this case—he made it so luscious I wanted to live in it!) But nothing more was needed. There were so many delicious lines that it zipped right along.

You know I rarely discuss the actual story of a play, so that you can discover it for yourself as the action unfolds, but because of its social relevance today, I feel I must. Not knowing anything going in certainly added to the enjoyment for me, but since every other theatre critic seems to feel that they must show their intelligence by recapping the plot for you, you may already know the subject matter.

So let me just say that homosexuality is discussed, and so much of what Mr. Coward wrote in 1966 is still astonishingly accurate today. I was floored. I also did not know that homosexuality was illegal in England at the time! How disgusting was that?! That fact just broke my heart.

Very many of the lines could absolutely have been written today. As old-fashioned as much of the play seemed, it also had a very contemporary air to it. You have just got to love that Coward fellow!!!

The play itself and the set were the stars for me. The performances were certainly good enough, but all three principals were sort-of hard to hear or understand. I’m not the only one saying that; it was a big topic of conversation among the opening night audience at intermission and after the curtain. Roxanne Hart, as the wife, was particularly hard to make-out because she was affecting a German accent, and her voice kept cracking. I was wondering if that was due to her accent, or if she had a sore throat that night. She had some of the evening’s best lines, and delivered them really well, but I truly made-out only about half her words. (And, while we’re on the topic of accents, I wasn’t exactly sure what the female lead, Sharon Lawrence, was doing with hers. I wasn’t sure if it was supposed to be British or from some other European country or upper-crust New England or just show business affected.)

The one person I could really understand was Zach Bandler as the waiter, but his role was tiny and of little consequence.

I did enjoy the Nigel Bruce-esque voice of the male lead, Bruce Davison, who was perfect for this role. (For you non-old film lovers, Nigel Bruce was Dr. Watson in what I consider to be the only Sherlock Holmes films.)

I was not familiar with any of the actors prior to opening night, which I think made for an even more enjoyable experience; I came in with no pre-conceived notions of them, and could therefore just relax and view them solely as the characters they were portraying. [Note: When I read the program later, I did, indeed, recognize Bruce Davison’s picture. But it bore no resemblance to the man before me on stage. So, either it’s a really old head shot or the make-up design made him look totally different. No matter, though; the way he appeared in the play is exactly how the character should look, in my opinion, so it all worked-out.]

All you need to know, really, is that A Song at Twilight is well worth seeing. It’s clever and witty and timely, too. And well-performed.

I had just one little shallow problem with it; as much as I enjoyed the play, watching senior citizens discuss sex, no matter how entertainingly, is not my idea of fun. Once, Mr. X and I saw a 60 Minutes piece on the topic, and he and I were cringing and holding hands to get through it! Mature behavior, eh? It’s well-done in the play, but just not my cup of tea, which says more about me than the show!

Despite that craziness on my part, I still highly recommend A Song at Twilight to everyone. It’s yet another high-caliber production from the Pasadena Playhouse peeps.

I must give you one warning, though; the characters smoke, a lot. And it permeates the theater, even after they put the cigarettes out. I’m just about positive that they’re herbal cigarettes, rather than tobacco, but it still is very uncomfortable to be inhaling, especially if you have any breathing problems to begin with. I heard several people complaining about it. So if you have asthma or the like, just make sure to sit in the back. And keep your inhaler handy. [Note: I’ll be addressing the issue of smoke in theaters in more depth in tomorrow’s review of a different production in town.] 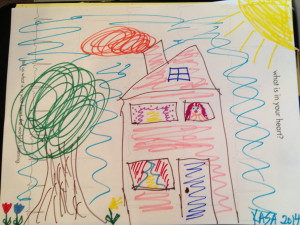 Karen’s drawing for the “what’s in your heart” wall, completed in under ten minutes! Photo by Karen Salkin.

And don’t go hungry! The characters dine on sumptuous fare during the show, and I was craving it all from the first moment the menu for the evening was mentioned. (It was early on, I must add, so my mouth watered for the duration.) And definitely have reservations in one of the area’s fabulous eateries post-show, especially one that serves steak and chocolate soufflé! Yum!

Other than that, I really love this theatre and, no matter what is happening onstage, there’s always something happening around it, as well. At intermission, I wandered into the Friendship Center, which is a little room off the front courtyard, which always has something different going on for each production. For example, when they had a show about Janis Joplin a year ago, they were featuring actual letters from her, and lots of original Janis memorabilia. This time, it was manned by an organization who was asking guests to draw a picture of “what’s in your heart,” and they hung them all in an interesting, colorful display on the wall. I was happy to oblige with my semi-famous scene of a house that I draw anytime I get my hands on crayons or, in this case, colored markers, and my guest came up with a lovely rendition of her dear departed dog. 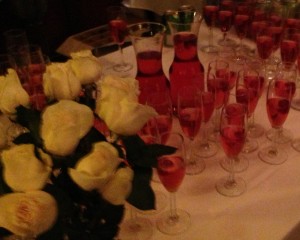 Pink champagne at the after-party, in keeping with the theme of the play. Photo by Karen Salkin.

The after-party was at the nearby McCormick and Schmick’s in the gorgeous Plaza Las Fuentes. The atmosphere was totally upbeat because of the quality of the production we had just seen, the ever-flowing food and drinks, and the oh-so-pleasant service. And I loved that all the Playhouse personnel, including the renowned usherettes, were included! That’s the way soirees should be done!

And if this place has that aforementioned soufflé on their regular menu, you can even head here after you see the show!