Trending
You are at:Home»THEATRE»THEATRE: A SNOW WHITE CHRISTMAS
By Karen Salkin on December 16, 2019 · THEATRE

This “panto,” (which I’ll explain in a minute,) is the perfect holiday entertainment. Heck, it’s really the perfect anytime entertainment! But you have only this Thursday through Sunday to see this magical show, so if you’re anywhere near SoCal, (with or without kids,) I suggest you make it a priority.

In case you don’t know what a “panto” is, it’s a British theatre tradition, which the Lythgoe Family has brought to American audiences over the past several years. They produce these fun shows in a few cities around the country, and luckily for us Southern Californians, Pasadena is one of them. 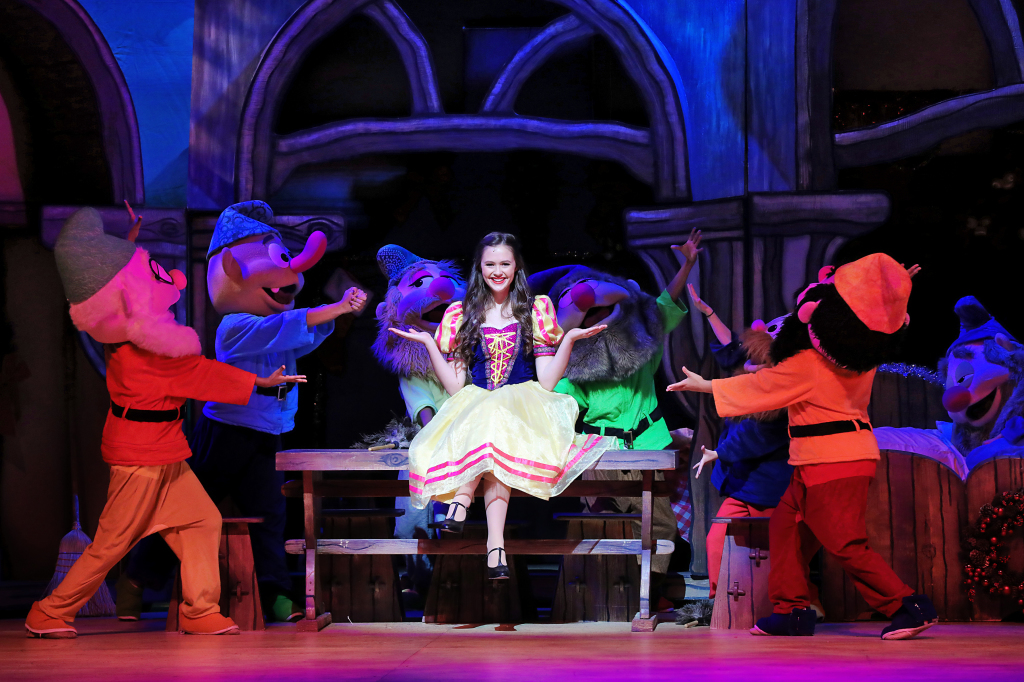 Olivia Sanabia and her adorable pals.
Photo by Curtis Brown.

Each presentation is based on a well-known fairy tale, but doesn’t follow the scenario exactly. All pantos are interactive, and the crowd really gets into booing the villain, cheering for the heroine, and saying hello to the most comic character who acts as the emcee of the proceedings. (In this case, it’s a court jester named Muddles.) There’s also lots of dancing and well-known songs. Writer Kris Lythgoe not only makes his versions much more fun than the originals, but his clever and witty lines are a laugh riot, none moreso than in this new rendition of A Snow White Christmas.

This script is so well-written. There’s never a dull moment in the entire production! The two women behind me were going berserk over the humor for the entire two hours!!! (But I almost didn’t even notice them through my own guffawing!)

This is the Lythgoes’ best panto yet. There was actually an earlier version of A Snow White Christmas produced elsewhere in Pasadena, seven years ago. It was the first one in this now-annual tradition, but I did not get to see it. (As always, I was over-booked back then, too.) And I’ve been feeling bad about that loss ever since I saw their Aladdin the following year. So I’m extra thrilled that now I’ve finally seen this show, and the new and improved updated version to boot! (Kris has so much topical humor in his works that he had to change and add a lot to the script.) 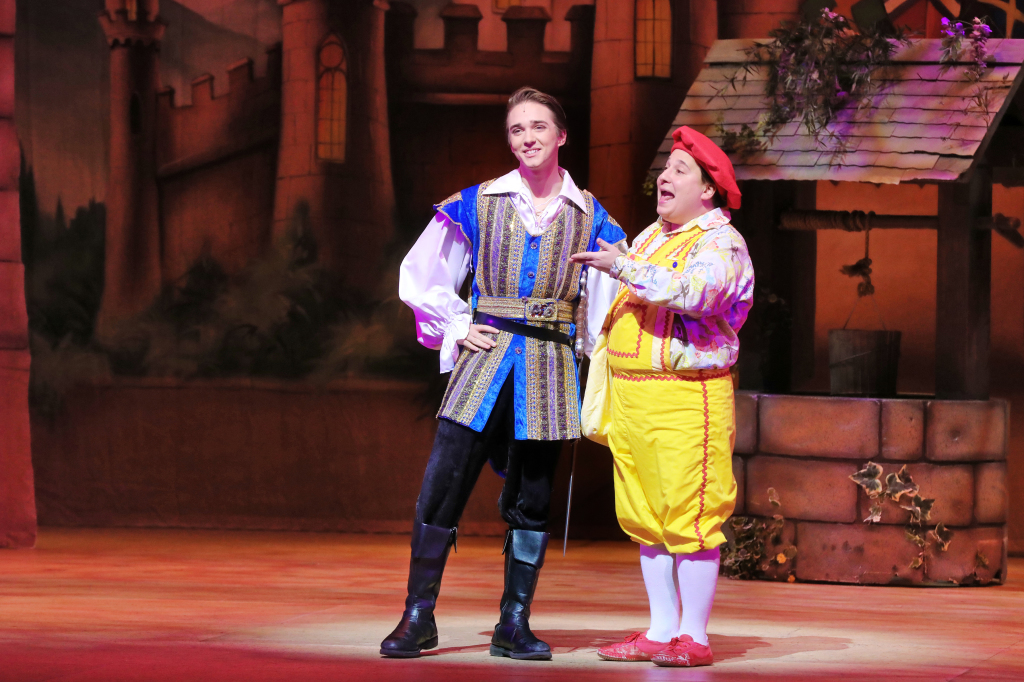 The cast of A Snow White Christmas is top-notch, led by the adorable Jared Gertner, who is his usual incredibly talented self in this one. His Muddles is not only the thread that pulls the entire narrative together, but he’s also basically the host who guides us through the story. Jared is hilarious, sings beautifully, and can even dance. But he’s at his best when he’s interviewing the dozen or so children who come up on stage near the end of the show. (Go to the website at the bottom of this review to find out how to get that extra perk for your own charges.) In recent weeks, I’ve seen a couple of other performers do kid interviews like the ones at the pantos, and they all fell well short of what Jared does. In both instances, I kept thinking, “They need Jared.” I now want to have kids just so that they can chat with him!!! (And live with him, too, after the chat; I really don’t want children for any other purpose. Mr. X and his antics are enough of a handful for me!)

The rest of the cast is stellar, as well. It’s quite the experience to hear Destiny’s Child’s Michelle Williams, as the Wicked Queen, sing in person, especially after her fabulous stint on this seasons’s The Masked Singer! She’s an incredible performer, whose rendition of I Put a Spell On You is worth the price of admission alone. And she’s really funny, too—who knew?! It’s great that Michelle made time among all her other endeavors to do this panto, which she told me she’s really enjoying. 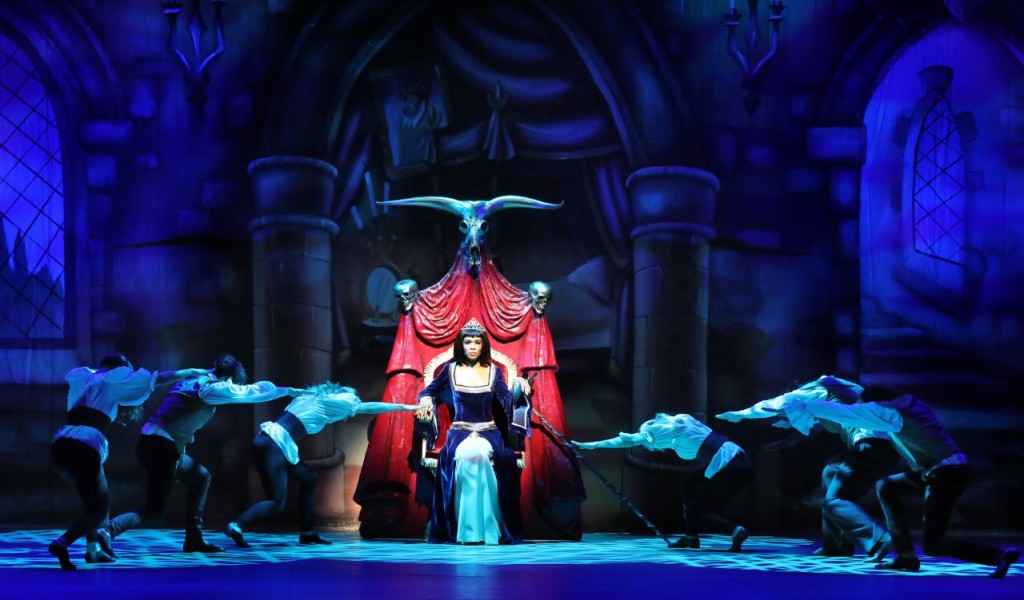 Olivia Sanabia, who plays Snow White, is gorgeous, talented, and most importantly to me—sweet! Interviewing her prior to the panto’s opening was a breeze. She was raised right! (And you know that I always love my fellow long-tressed ladies.)

Rounding-out this perfect cast are Michael Campion, who brought a youthful charm to the mainly non-singing role of the Prince, and Garrett Clayton, as the Huntsman, whose singing really wowed me, especially on Elton John’s I’m Still Standing. (He told me that he’s wearing a special pair of glasses for that number, which I believe he got at one of Elton John’s Oscar parties.) And let me not forget to laud Neil Patrick Harris in his recorded role as the Magic Mirror. (Kudos to the tech people who timed his video chats in perfect sync with the live actors.) 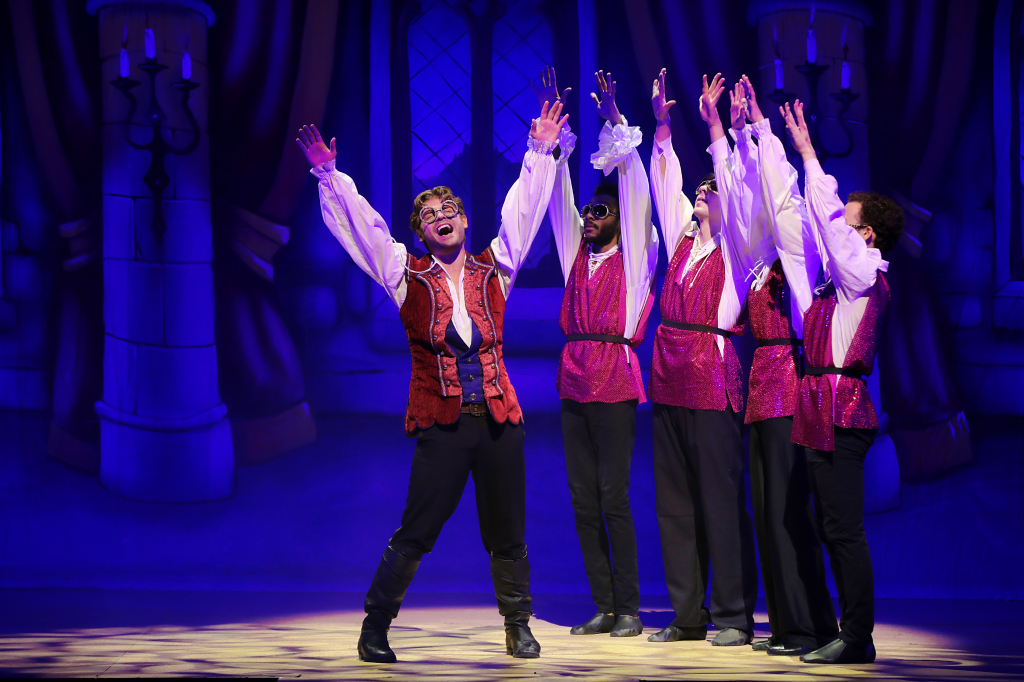 But the hit of this particular panto for me were the Dwarves!!! They are absolutely adorbs!!! I especially loved the smallest one. OMG. I was having such a great time watching the earlier portions of A Snow White Christmas that I almost forgot the charming septet was even in this story, but I got even happier when they arrived on the scene. I actually screamed like I was seeing the Beatles!!! They are done so cleverly. And them doing YMCA is one of the most fun moments I’ve had in any theatre anywhere! I want to see just that part every night of my life. (Mature of me, right?)

While we’re on the subject of the songs, there are great choices at every turn. As much as I loved all the happy upbeat tunes, I was equally enamored with Olivia’s beautiful rendition of Sara Bareilles’ Gravity, which made me tear-up a bit. (All the music is coordinated and arranged by Musical Director extraordinaire Michael Orland.) 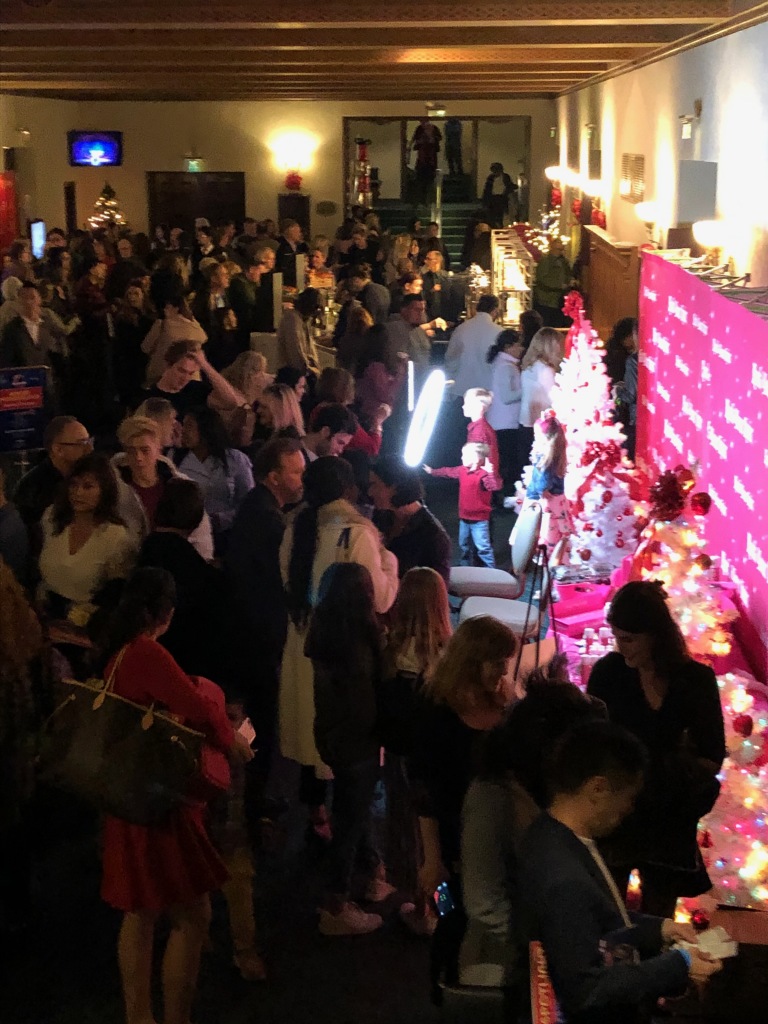 The program does not list a set designer nor a costume one, but props to those artists, as well. The crayon-colored sets made my mouth water, and the constant creative projections enveloped the entire auditorium, which made it all that much more spectacular.

As always with Lythgoe Family Pantos, A Snow White Christmas has a very happy ending…for everyone! And there are even more surprises at the end, both inside and outside the theatre.

So I’m advising that all of you go see this show while you have the chance. And make sure to get there early so that you have time to peruse the Winter Wonderland in the lobby.