Trending
You are at:Home»THEATRE»THEATRE: A MIDSUMMER NIGHT’S DREAM
By Karen Salkin on August 23, 2017 · THEATRE

I have to start at the beginning of this one. (But if you don’t have time for the complete journey right now, I can cut to the chase and tell you that this is a positive review.) 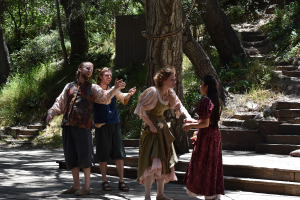 (L to R) Paul Stanko, Brant Rotnem, Rosemary Brownlow, and Kaitlyn Fae.
Photo by Ian Flanders, as is the big one of the fairies at the top of this page.

As I hope you all could tell from my two previous reviews of plays at Theatricum Botanicum this summer, I’m enchanted with this theatre. It’s so much more than a play venue; it’s a whole magical summer experience. And as you regular readers know, Mr. X rarely comes out with me. And lastly, to put this tale together, I’m really not a fan of Shakespeare. I recognize the merit of his work, but there’s not enough time in my life to spend any of it being confused and annoyed.

Until now. Someone who read my review of a different show at this repertory theatre really encouraged me to also see their production of A Midsummer Night’s Dream, despite my non-fan-ship of Shakespeare. (I don’t dislike his writing; I’m just not into it. Trying to decipher it is exhausting.) Mulling over that advice, I realized that, if ever in my life I was to see that classic play again, Theatricum Botanicum would be the only place to do that. I just knew that seeing it on an outdoor stage, with so much “forest” on three sides of it, would be something special. And I was absolutely correct! (Did you have any doubt?!) 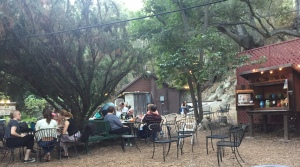 Some of my fellow picnickers. Photo by Karen Salkin.

There were two other factors in my decision. The first is that I really wanted Mr. X to see this place, and the second is that I had my heart set on having a pre-show picnic there, as I had enviously witnessed so many others doing during my earlier visits.

So off to Theatricum Botanicum we went last Thursday night. (It plays on that night of the week only, so you guys have just two more dates to take the opportunity to see A Midsummer Night’s Dream there—tomorrow night and one more, after the holiday. My advice is to do so!)

With my crazy busy sked, I, sadly, did not have time to plan an elaborate picnic. (And we can always dine al fresco on our own deck, which is primarily in the country, too, if bugs and uninvited animals count.) But I quickly packed a tablecloth, napkins, cherries, several kinds of chips, and chocolate treats, along with bottled water, because that’s all we drink. I figured we’d find some fun sandwiches or something along the way.

I really wanted to not get food before we hit Topanga Canyon because I’m fascinated with those rustic places along that one winding road. I have to admit that our sojourn did devolve into Mr. X’s least favorite activity—Quest For Food—but it all worked-out okay because we wound-up finding basic turkey sands at the local General Store, and they turned-out to be absolutely delicious!!! 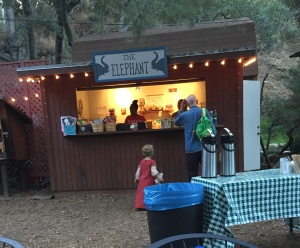 Someone came dressed appropriately for the occasion! (But sorry the garbage bin got in the way of seeing the whole outift on the little cutie.) Photo by Karen Salkin.

The “picnic” worked-out great, except for two things—1) the place was packed, (which I was surprised about because this was, as my little mother would have called it, a plain little Thursday night!,) so we didn’t get to sit where I wanted to on the premises, and 2) a bee wouldn’t leave us alone! We really think the culprit was our light green tablecloth, (or maybe just the sweetness of me,) so don’t bring one that color when you go, nor a yellow one. But we had a good time, anyway. (And I finished my food in yet another picnic area at intermission, so that made it even more fun.)

Then it was on to the show. I did enjoy it, but that was mostly due to the incredible surroundings. I had seen A Midsummer Night’s Dream before in my early life, (because my parents made sure that we had every cultural experience available in New York,) so I had a slight remembrance of the basics of the story, but I still didn’t get the scenario most of the time in this version. I really think they made several changes to the exact tale, like changing a father to a mother, and maybe a boy to a girl. For some reason, they had a little girl in modern clothing, walking around with the fairies. At one point, she even waved to someone in the audience! What was up with that?! (I surmise that there must have been a contest for a child audience member to appear on stage, but I can’t figure out the purpose of that. And I was worried that perhaps that part of the multiple storylines was about a lost or kidnapped child, which I had suppressed because that would be too horrible.) 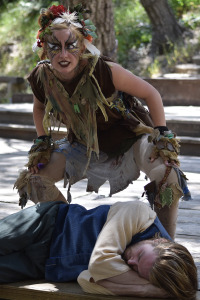 And something tells me that old Willy didn’t write monkey and dog impressions for the actors to do in his original script. But that’s just a guess.

I was thrilled to see Mr. X laughing and smiling through most of it, even though, despite that he has done Shakespeare himself, he was also confused as to exactly what was happening. (When, a day or two later, I read him the Plot Synopsis that came in the press kit, he answered simply, “I didn’t see that show.” Touché.)

But none of that really mattered; we just went with the flow, and had a lovely time. Let me tell you—this is the place to see A Midsummer Night’s Dream!!! The entire atmosphere is perfect for it, and the staging makes great use of the venue’s entire rugged landscape. I have a feeling that Shakespeare himself would have loved this setting for his play!

I really enjoyed two visual touches–the specialty make-up on the fairies, especially Puck, (who was, strangely, female in this one,) and the interesting footwear on many of them. 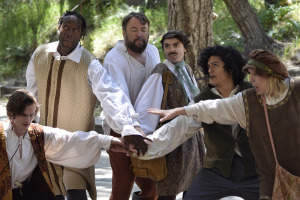 The roving troupe of actors in the play. Christopher W. Jones is third from the left. Photo by Ian Flanders.

But the two best parts of the show are these: Firstly, Mr. X pointed-out that the off-stage musicians, who provide spot-on sound effects, are incredibly precise. They really, really, really add so much to the fun of the experience, while being totally unobtrusive. Major kudos to them!!! Verily.

And secondly, my favorite actor in this piece, Christopher W. Jones, who plays Bottom, the full-of-himself actor who turns into an actual animal ass, gives a really humorous performance. According to his bio in the program, he’s primarily a Shakespearian actor, so no wonder I knew exactly what he was saying at all times! Somehow, he delivers his lines so that they are easily understood. And hilarious! Big props to him, as well.

So, in this case, all’s well that ends well, (wait—that’s a different play by Shakespeare, but you know what I mean–and maybe they’ll do that one next year!,) and the large assemblage left with big smiles on their faces. And, in the case of Mr. X and me, full stomachs, as well! And just as that woman encouraged me to see this show, that’s what I’m doing for my fellow Angelenos. Do not miss this one!