Trending
You are at:Home»THEATRE»THEATRE: A LITTLE HOUSE CHRISTMAS
By Karen Salkin on December 1, 2016 · THEATRE

I have never read the Little House on the Prairie books, nor seen the TV series, except to hear a bit of it when my little mother watched it. (Obsessively, I might add.) She really loved those old re-runs! So, this Sierra Madre Playhouse Christmas offering was basically my first real taste of what those shows and books are like. 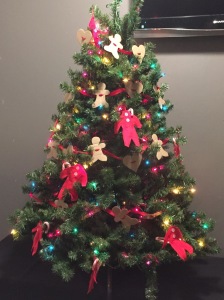 The cute little Christmas tree in the lobby, decorated with flannel underwear, to fit the theme of the play. Photo by Karen Salkin.

Material like this is far from my usual cup of tea, but I appreciate the holiday atmosphere that the Playhouse is offering. I love this theater, especially at the holidays. They make everything feel warm and fuzzy. (Mr. X said, “Just the look of the physical theatre from the street is uplifting. It’s crazy!”)

In case you, also, are not very familiar with the Little House stories, they follow the real-life Ingalls family in the Midwest, circa 1870. This particular one takes place at Christmastime. (I believe the story is adapted from Laura Ingalls Wilder’s books, rather than being directly from one of them.)

There’s not really much of a plot here; rather, it’s basically just showing us what one old-time Christmas in the Midwest might have been like for this family. There are relatives, guests, boys, girls, singing, live down-home music, some dramatic weather action off-stage, and a Christmas tree. What more could you want?! (Well, actually, I did want something more—for that tree to finally get decorated!!!) 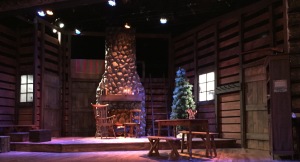 As usual at SMP, I loved the set, which was designed by Stephen Gifford. It’s also great that the stage is so high up, so that, no matter where you sit in the theatre, you’re able to see over people’s heads.

The show starts out pretty slowly, (and stays that way for awhile,) but both Mr. X and I said separately that it picks-up when “Uncle George” starts playing the harmonica. Barry Schwam does a charming portrayal of that sweet, quiet man. 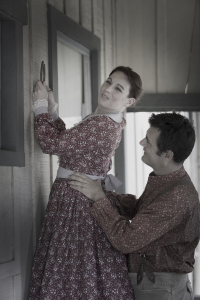 The entire cast is actually appropriately goony, with a couple of other stand-outs. Rachel McLaughlin, who plays the mother, is an excellent singer and dancer. I really enjoyed her few little musical bits. And, Thomas Colby, as the good friend and neighbor, certainly gives his role his all. That man is a fount of boundless energy!

I think that everyone will appreciate the addition of the live music from that time period. (This is not a musical, though; it’s billed as “a play with music,” which is the perfect designation for it.) Rich Cassone, (as “Pa,”) plays the fiddle quite a few times, which he learned to do just for this show! Wow. That’s quite an impressive feat. Along with George’s harmonica, they add a welcome richness to the action. And in this very countrified playhouse, with all the wood on stage, it really did take me away from modern times for that little while. I felt like I was a little girl with my family again, watching a play in Bucks County, Pennsylvania, or Narragansett, Rhode Island, (which, to a Brooklyn girl like me, was about as country as one could get!) I love that feeling! 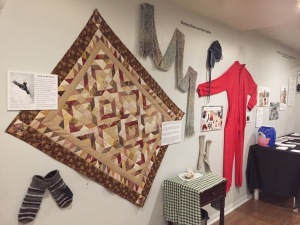 Part of the lobby display. Photo by Karen Salkin.

They could have easily cut the opening song, though; it added nothing, except a very slow start to the play. But I’m guessing that the powers-that-be at the theatre felt they needed it to set the tone. Or perhaps to lengthen this particular theatre experience. Even with intermission, the show is only ninety minutes long, (which is just the way I like it, by the way. It’s the perfect length of time to be in one place during the busy holiday season.) 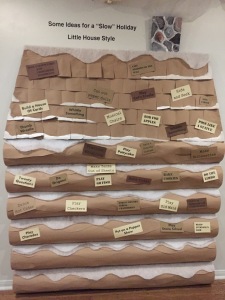 I feel that every child in Los Angeles should see this show so that they realize just how lucky they are. There’s nothing like the realization that one’s counterparts had to fetch their own firewood back in the day, if they wanted to be warm, to make someone appreciate all their modern conveniences. (Actually, sadly, in many areas of this country, people still have to do that, or similar chores, today!) I’d venture a guess that most LA kids never heard of such a thing. Maybe the play should be interactive, with every child or young adult who sees it having to do some labor. (I would pay extra to see that!)

Hopefully, just perusing the always-interesting lobby display will do the trick for some of them. There are all kinds of fascinating tidbits out there, including what to do on a “slow” holiday, like “whittle something,” and “thumb wrestle.” (Oysh.) I must admit, though—I’d be more than happy to “play Old Maid!” Maybe that means I’m more rugged than I thought! (Yeah, right.)

At the start of intermission on the night I saw A Little House Christmas, I heard someone say, “I’m hooked.” I think you will be, too.