Trending
You are at:Home»THEATRE»THEATRE: A GENTLEMAN’S GUIDE TO LOVE & MURDER
By Karen Salkin on March 30, 2016 · THEATRE

A GENTLEMAN’S GUIDE TO LOVE & MURDER

I loved this show! There is no way that anyone can space out into his or her own problems during it. It’s wall-to-wall escapist entertainment, and it commands your total attention the whole time. Not only did I not take one note during it, I actually forget that doing so was even a possibility!  I was totally captivated the whole time.

As critical as I usually am, there’s not one thing I would change about this production of the Tony-winning musical, A Gentleman’s Guide to Love & Murder, at the Ahmanson Theatre. It’s absolutely charming and engaging. 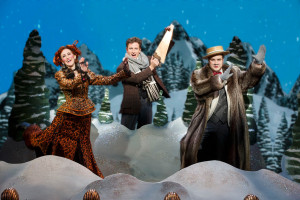 (L-R) Lesley McKinnell, Kevin Massey, and John Rapson. Photo by Joan Marcus, as is the big one at the top.

As I was writing this review, I found myself typing the word “clever” for everything. That about sums it all up in one word, outside of my usual “fabulous.” [Note: Of course, I changed most of them to other equally-meaningful adjectives, but if you like, you can just insert “clever” wherever you want, because that’s what the whole show is!]

Who would have thought that a story of multiple murders would be so amusing?  (I know that it’s a “black comedy,” but I’ve never been a fan of that genre before.) Or that we’d root for the murderer? (And that’s all I’m going to tell you about the plot. It’s laid-out at the very beginning of the show, so I’m not really spoiling anything for you.)

I erroneously assumed that A Gentleman’s Guide to Love & Murder is entirely original material, and wondered how someone could have come up with the comedic tale, the clever songs, and the very many creative touches.  Upon researching the show, (because I was absolutely fascinated by it,) I discovered that it’s based on a book written in 1907! Israel Rank: The Autobiography of a Criminal, is also upon which one of the few old movies I’ve never seen, Kind Hearts and Coronets, was also based.  [Note: If you really want to know the plot, please look it up for yourself because, unlike all the critics who feel the need to show their “reading comprehension” skills by telling you the entirety of what they just witnessed on stage, I never want to ruin shows for you.  I like to discover the whole scenario for myself, and assume that many, if not most, of you are intelligent enough to feel the same way.]

The show itself is the star, but without these marvelous performances, and the tight direction by Darko Tresnjak, (how’s that for an interesting moniker?,) it wouldn’t be half as effective.  The entire cast is excellent, and all their singing voices beautiful.

I know that there are those who think that a National Touring Company can’t possibly be as good as the Broadway cast, but even though I never saw the originals in this one, I can’t imagine a company of actors performing this show better than the one at the Ahmanson. They all had the polish of people who had been doing the show for years. 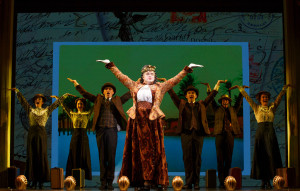 John Rapson in the center. Photo by Joan Marcus.

It took me about three characters to realize that John Rapson was playing nine different roles, (of both sexes!,) all members of one family.  The parts are very well-written and defined, and John makes them all so different, imbuing each one with his or her own distinct personality.  I know that the actor who played them on Broadway, Jefferson Mays, was considered a revelation, but, having never seen him, I can’t imagine the D’Ysquith heirs being more delineated or funnier than in Rapson’s portrayals. I wasn’t there to compare cast members, anyway, but rather to just enjoy the show, as is. Which I did to the hilt!

Mr. X especially enjoyed the character of Monty’s vapid, narcissistic love interest, Sibella, (and the girl who played her, Kristen Beth Williams.)  At halftime, I asked him if he was enjoying the show, and he answered, “I love you up there.”  I was so relieved to discover that he was talking about beautiful-but-vain Sibella, rather than the chubby, dowdy, old housekeeper character! (And I am so vain that I actually love that comparison!)  [Note: That latter description is of that character, not the actress.]

I’m also a fan of the very interesting Alexander Dodge-designed set. It’s made to look like an old-timey stage, and is just beautiful. And the imaginative backdrop projections, designed by Aaron Rhyne, are stunning and brilliant!  I was taken with them from the very beginning, when I noticed something as subtle as smoke rising from the smokestacks.

As for the songs, I don’t really think there’s a show-stopping number here, per se, but A Gentleman’s Guide to Love & Murder doesn’t need it; it’s enough that we can understand just about all of the inventive lyrics, and the songs do further the story, in most cases. 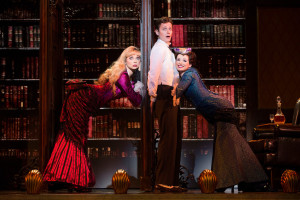 I was already familiar with my favorite musical number in the show, I’ve Decided to Marry You, but I couldn’t wait to find-out how it fit into into the narrative. I was pleased to discover that everything about it is spot-on. The trio of Kevin Massey, Adrienne Eller, and the aforementioned Kristen Beth Williams execute it to perfection. The only thing I can liken it to is a precision skating team!

Speaking of Kevin Massey and perfection, I can’t imagine anyone more perfect for the starring role of Monty Navarro than he. What stamina anyone who plays Monty must have because that character is barely ever off the stage! And in this case, Kevin is also cute, can sing, physically fits this role to a tee, and his face even plays to the back of the room, (which is, sadly, where I sat this time. But I swear, for this show, I don’t think seat location is really of much consequence. It works from anywhere!)

Actually, there was only one tiny little detail that upset me a bit, and it occurs during the curtain call! Kristen Mengelkoch, who is part of the ensemble, but also has a wonderful comic turn in the second act as Lady Eugenia, (the wife of one of the final D’Ysquith relatives we meet,) should get to have her real bow, the one she deserves, as that character. I guess that because the last part she plays is an auxiliary one, (as just a townsperson or something,) she has to go out for the bows dressed not in her identifiable-as-Eugenia costume. I’m sure the reasoning there is that she has no time to change, but maybe they should bring her Eugenia’s distinctive green dress to hold up, or do something else to that effect. (Unless I just missed it, but I can’t imagine that I did, especially because others I asked about it did not see her in there, either.) [Note: To give Kristen a bit of her props, that’s her in the green dress in the photo at the top of this page.]

But that doesn’t count as a negative to this show, because there are none! So, if you have even a modicum of a sense of humor, or even a tiny drop of affection for Broadway musicals, you have got to go see A Gentleman’s Guide to Love & Murder, while you Angelenos are lucky enough to have this opportunity.