Trending
You are at:Home»THEATRE»THEATRE: A CHORUS LINE
By Karen Salkin on June 4, 2010 · THEATRE

The iconic ‘70s musical, A Chorus Line, is back in LA. If you’ve never seen it, or just haven’t in a while, now would be your chance. It’s one of those shows that everyone must see at least once. And, although I’ve seen it several times in my life, I was surprised by just how much I didn’t remember! None of the major stuff, which I knew almost word for word, but the incidentals. 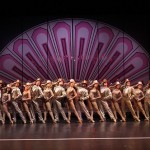 As I was sitting in the opening night audience at the Pantages Theatre, I kept thinking that I had seen this cast before. It’s the touring company, so it was a great possibility. The performers I thought were weak last time seemed to be the same. But, though it took a little detective work, I dug out the cast I saw in 2008, and only three were the same, including the girl with the best voice, Stephanie Martignetti, as Maggie. (I don’t want to name the weak performers because they don’t really detract from the show, and the audience seemed to enjoy everyone.)

But no matter which performances are lacking, I think it would be hard to mess-up the show in general because the music holds up so well. And the story of the plight of professional dancers has never been more in the public’s consciousness than now, due to the popularity of shows such as So You Think You Can Dance. For instance, on SYTYCD, we’re seeing hundreds of fantastic dancers, and that’s just a mere pittance compared to the number who auditioned, and only five of each sex will make the pared-down Top 10 this season. Such a shame. And even the winners don’t get much fame; you have to really scrutinize the background dancers on variety shows to find even a past winner’s face, while many marginal-at-best singers on American Idol get to torture our ears, front and center.

As often, I digress. But that shows you how relevant A Chorus Line is to today’s entertainment business. For those of you who have been living under a rock, the show is simply about a group of dancers who are auditioning for a Broadway show. The director makes them bare their souls and talk about their dysfunctional families and the like. Maybe that’s where the creepy Nigel Lythgoe got the idea behind what he does to these poor kids on SYTYCD! I’ve always thought it was cruel on that show, and it really bothered me again in A Chorus Line. I really don’t like to see people be forced to spill their guts. (Unless they’re confessing to a crime, that is.) But that’s the premise of this show, so I just went along with it, and enjoyed the music and dancing.

My only big complaint was the lighting. I’m sure it complies with the original design from 1975, but it was just way too dark, sometimes didn’t highlight the person who was singing a couple of lines, and was generally making me drowsy. It really needed more pep. And light!

And I couldn’t decide if the material was dated or not. I know the costumes are! But, in the show, the fictional dancers have to give their ages, and most were mid to late twenties, going up past thirty! Nowadays, most of them would be seventeen to low twenties. Sad, actually. And, I’m seriously asking this–did they use the term “gay” in 1975? For some reason, I don’t think so.

A Chorus Line is only one ninety minute act, and it goes by pretty quickly. To me, it’s a must-see, especially for young people interested in musical theatre education. I think it’s great when theatres produce old school musicals, (including South Pacific at the Ahmanson, which I’ll review next week,) and I think we should all take advantage of getting to see what previous generations did. In the case of A Chorus Line, it proves the old adage that “everything old is new again.” 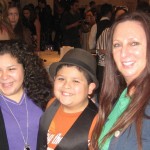 Karen with Raini and Rico Rodriguez at yet another A-list event two days later. We're thinking maybe a sitcom for the three of them!

One audience note: I was thrilled to run into one of new favorite actors there–Rico Rodriguez, who plays Manny on the hilarious Modern Family. Not only is he perfect on the show, but he and his protective big sis, Raini, are lovely children. When I was telling Rico how much he makes me laugh, he said, “Thank you so much! That’s really a big compliment to me.” And then, instead of just dismissing me, Raini kindly said, “Well, we have to get back to our seats now.” Someone raised those children right! That’s two people who wouldn’t have horrible stories as characters in A Chorus Line!