Trending
You are at:Home»THEATRE»THEATRE: A BRONX TALE (THE MUSICAL, NOT THE FILM)
By Karen Salkin on November 12, 2018 · THEATRE

A BRONX TALE (THE MUSICAL, NOT THE FILM)

The movie version of A Bronx Tale is one of Mr. X’s favorite films, and I just love vibrant, dancing musicals. So attending the opening night of the National Tour of this Broadway musical at the Pantages Theatre in Hollywood was a perfect evening out for us. 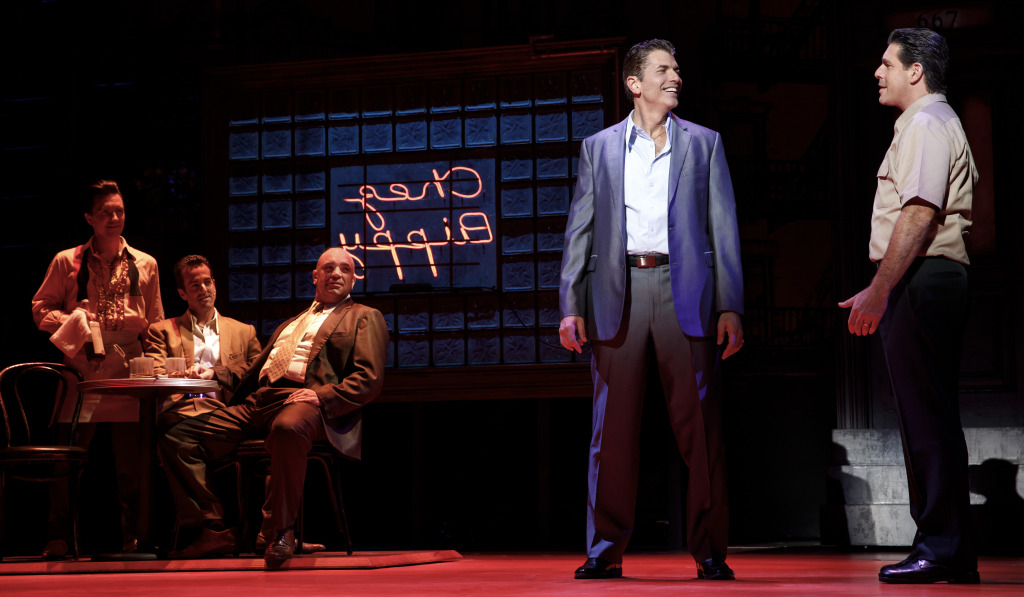 (L-R) John Gardiner, Robert Pieranunzi, Paul Salvatoriello, Joe Barbara, and Richard H. Blake.
Photo by Joan Marcus, as is the big one at the top of this page.

I really did not know what to expect. I could not imagine how this serious and gripping drama could be turned into a musical, of all things. But with the star-power of the creative team behind it, I knew it would have to be good.

One of the co-directors is none other than Robert DeNiro, who did the same honors for the 1993 film, which he also starred in. The other co-director is Jerry Zaks, who directed Chazz Palminteri’s one-man show of it on Broadway, back in 2007. (Mr. Zaks also directed Mr. X when he starred in the National Tour of They’re Playing Our Song, so I was already a fan of his work, obviously.)

Then we have the music done by frequent Disney composer Alan Menken, and what could not work? 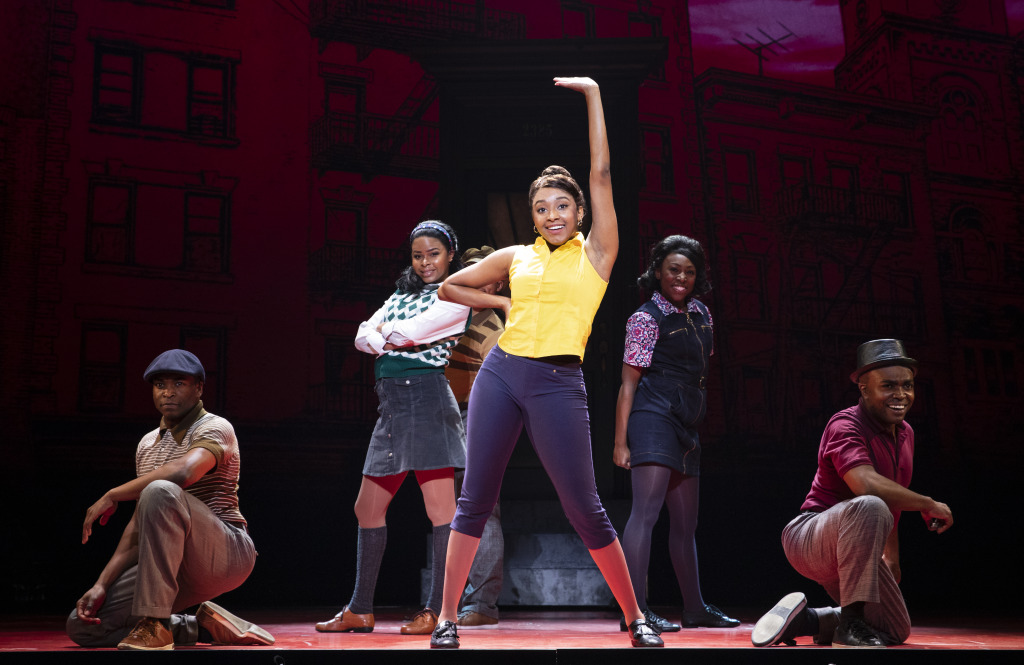 Brianna-Marie Bell in the center, with (L-R) Antonio Beverly, Ashley McManus, Brandi Porter, and Jason Williams, and Kirk Lydell in the back. Photo by Joan Marcus.

As to the plot, I believe it’s pretty darn loyal to the original movie script, which is part mob saga, part interracial romance. In case you’re not familiar with this story, it’s a coming-of-age drama, whose main character is a New York Italian boy, who’s torn between the organized crime boss who befriends him, and his honest father, who’s the opposite of the lad’s new bestie. And to complicate matters more, he starts dating a black girl…in the Bronx of the 1960s!

I don’t think that potential Pantages audiences need to have viewed the movie before they see this musical version of A Bronx Tale, (especially because I just explained it all!,) but it might be a bit helpful. Then again, I always try to appreciate everything in life without prior knowledge, so that might be the way to go here. Either way, the tale is very easy to follow. 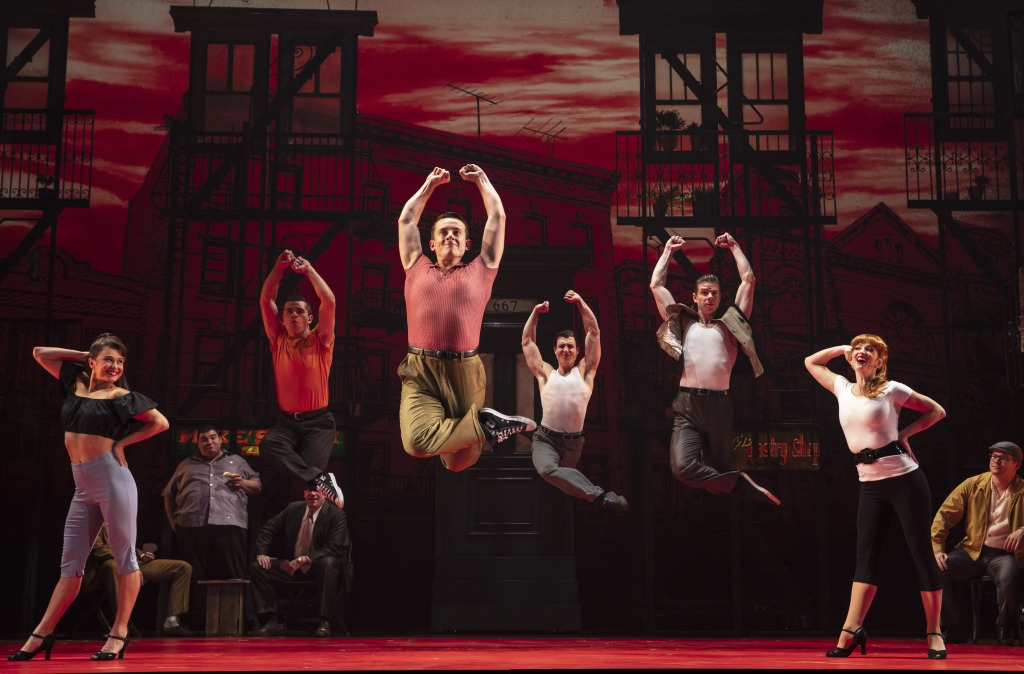 What makes this whole presentation so much better than the movie, for me, is the fabulous dancing by the talented ensemble. None of the leads here do that honor, (which is a tad odd for a musical,) but the producers were smart to cast so many masterful dancers who can also double as “wise guys.” I paid a little more attention whenever Sergio Trujillo’s choreography kicked-in. 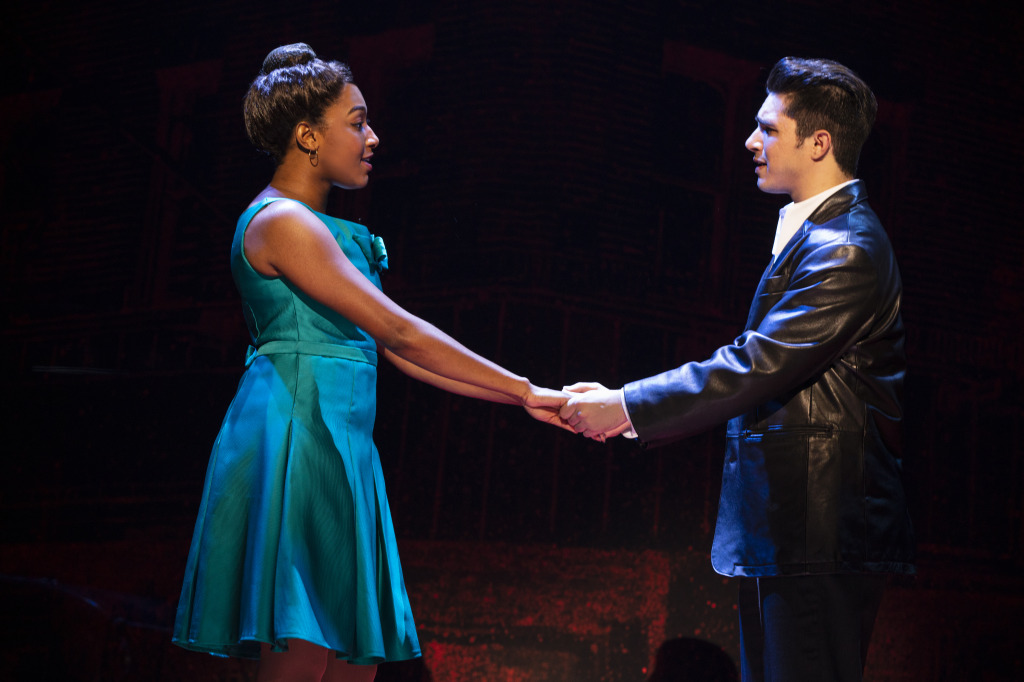 While none of the songs really got to me, the highlight is the love duet, In A World Like This, between Joey Barreiro and Brianna-Marie Bell, as the young lovers, Calogero and Jane. Their voices are beautiful together.

Actually, Brianna-Marie is the overall stand-out for me. The production gets a big spark whenever she sings. 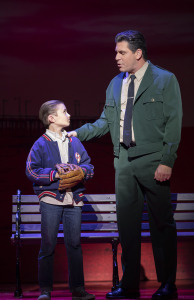 I also really enjoyed the singing voice of Richard H. Blake, as the boy’s father. The “baseball song,” Look To Your Heart, about the Yankees, is particularly charming.

I know that Frankie Leoni, who plays the main character, Calogero, as a nine-year-old, has been playing the part since Broadway, but it still impressed me that he was so comfortable in front of the opening night audience in this very judgmental town.

Actually, (and I hate to say this,) the only performer who did not cut it for me is Joe Barbara as the gangster Sonny, who becomes the mentor to young Calogero.  I know he did the same role on Broadway, but I still don’t get it.  This is a musical, but his singing is weak and a tad uncomfortable. And the actor in this pivotal role really needs to have more heart and pathos, as creator, screenwriter, and star of the movie, Chazz Palminteri, did in the film. I’m just sayin’.

On the very positive side, as usual for the Pantages, their musicians are outstanding! I love that so many of us exit slowly so as to hear every last note of theirs! 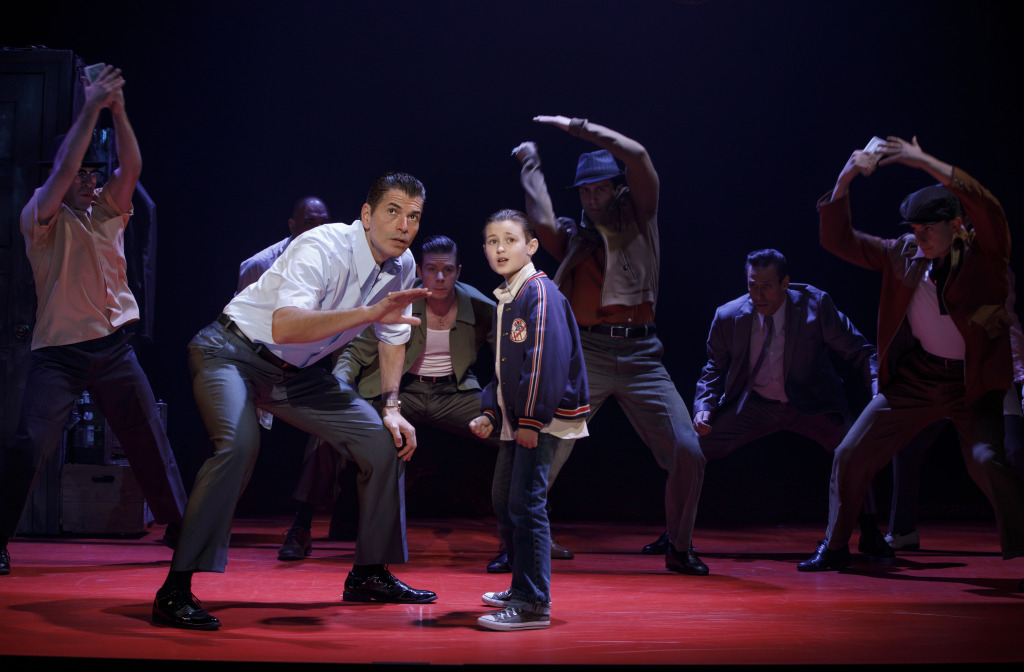 Since this is A Bronx Tale, after all, just be prepared for a modicum of violence. I hate violence ever, of course, and that extends to fictional, on-stage clashes, as well. But this show does try to make it as easy as possible on us, and doesn’t belabor any of it. 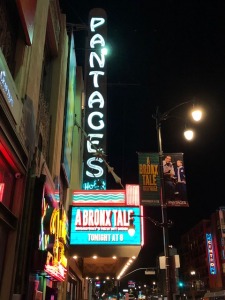 The exciting exterior of the Pantages Theatre. Photo by Karen Salkin.

As my resident Italian, (and one of the voices in the Sopranos video game,) Mr. X really knows this genre. He even did a movie with DeNiro! So I trust him on his admiration of A Bronx Tale. It’s just one of the many “mob” films that he’s watched many, many times. So I was relying on his reaction to this musical version. I really thought that he couldn’t possibly be down with a Broadway-ization of it, but he was fine, especially with the second act, which we both enjoyed much more than the first half. I think that’s because Act I contained so much plot exposition, as it had to, so it couldn’t really soar. And also because Act II opened with some real soul, with a number by Jane and her pals. From her cheers-inducing first note, the second act took off and held our interest for the duration.

On a personal note, my friend, Betsy, a young nurse in New York, told me about A Bronx Tale a year ago, because it was the first Broadway show she had ever seen. And she loved it. So, I tried to view it not only through my jaded tons-of-musicals-seeing eyes, but also through her Broadway-virgin ones. And I’m glad that we both got equal enjoyment out of the experience.

So I’m confident that you all will be entertained by this show, too. But hurry—it’s at the Pantages through Thanksgiving week-end only!