On the second day of summer last week, my friend Lauren, who was visiting from New York, and I ventured out to Glendale for opening night of the over-forty-year-old musical 1776 at Glendale Centre Theatre, which has the distinction of being the longest continually-operating theatre in the United States! And we were so happy that we did.

First of all, Glendale is not at all very far away from the west side—we were there in no time, and I loved the town! I had been there only once before, to the Galleria, (to choose my wardrobe for some celebrity charity fashion show I was appearing in,) but I didn’t get the feel of the town like I did this time. As a matter of fact, the very first note I wrote about this whole experience is, “Loved the location, theatre, parking, and lobby.” It was all just perfect, especially for seeing an old-fashioned show such as this.

I was particularly happy that I was seeing this production as the season turned to summer because it made me hark back to being a little girl on vacation with my nuclear family, enjoying summer stock and music tents (in the round) in Bucks County, Pennsylvania and Westbury, Long Island. I love that feeling!

This theatre is basically an indoor theatre-in-the-round, which is a fun set-up for the audience. There’s not a bad seat in the house! (But one word of warning—it’s frigid in there, for the sake of the actors, so dress in layers.  Trust me on this because I’m always hot, but I had to borrow a tablecloth, from the wonderful intermission festivities,* to wrap around my bare legs. I have no pride when it comes to comfort.)

[*For the opening night, they served Marie Callender’s apple pie, with vanilla ice cream, to the entire assemblage, which was such a delightful treat!  I’m not even a fan of either, but they were so much fun to partake of for that special occasion. And very clever of the theatre team to come up with; apple pie, America–get it?]

Now, finally, to the show review. As you should be able to tell from the title of the musical, it’s about the events leading up to the drafting and signing of the Declaration of Independence, a topic I spaced-on in school. (I know that’s weird for someone with a great memory like me, but I think that perhaps I have to witness an event to be able to retain every detail of it like I do.) It hit me near the end of the show that the acts depicted are why we all have the freedom to be able to sit here today to begin with!  Powerful stuff.

This, of course, is the perfect show for July, especially for the Fourth of July week-end, when this is exactly what we’re celebrating. Perhaps you should take your kids who either just studied the subject in school or will study it next year, to give them a leg up. 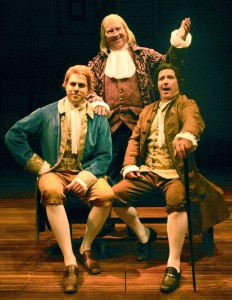 Quite honestly, this is not a topic that ever held my interest, but I did get involved in it here and by the end, I actually did have a little lump in my throat. But topic aside, the production itself was excellent, on every level. All the actors’ voices were Broadway-worthy, the set was creative and just perfect for the space, every word from every cast member could be understood, and Peter Husmann as John Adams should be first in line for an Ovation Award next year. His performance and voice tone reminded me of a straight Nathan Lane.

The casting of the main roles was great, and combined with the spot-on costumes, most members of the twenty-four men and two women cast really did resemble historic portraits. As a matter of fact, the man who played the representative from Rhode Island, one of the three states that’s near and dear to my heart, looks just like some of my college professors there! (And I loved being reminded that that state was so involved in the shaping of our country!  Even I, who’s lived there a lot, usually forgets that fact.)

Growing up in New York, my parents used to see every Broadway musical, and, being both a scholar and music lover, I’m sure that my father loved this one. I have a feeling, though, that my antsy mother probably made them leave before it was over.  But, it would have been no biggie because, as Mr. X said about the musical Titanic, everyone knows the end!  (I can only hope that we all do!)

So, the points about this show are mainly all positives. I enjoyed it and Lauren loved it. She keeps calling from New York to reiterate that fact and rave about Mr. Husmann. There are very few negatives, but, in all honesty, I must cite the length. At an hour and a half, the first act was way too long for me, and way too verbose, but Lauren enjoyed the historicalness of it. The second act came in at one hour.  I could easily have cut forty-five minutes from the show, but I believe that the deal with producing known shows is that they have to be produced as is, so the length isn’t the fault of this production. I really do prefer to see revivals in their original form anyway. Maybe in 1969, when it was produced on Broadway, audiences had more time on their hands.

Also, this was a strange topic for a musical, but most of the numbers did work, especially with those aforementioned great voices. (But if you’re desperate to get a head start to the restroom at intermission, and you’re sitting in a proper seat to get up without disturbing others, you can totally miss the final little scene of the first act.  It’s anticlimactic after the big exit number preceding it. Not that I’m advocating ever leaving an audience before you’re supposed to, but I’m just saying. Hey, if you gotta go, you gotta go.)

This is not a negative, rather an observation, but in my humble opinion, there wasn’t really enough music to call it a musical.  It was more of a musical/play hybrid, or a play with a few songs.  At the beginning, though, I thought it was going to be music only, ala Les Miz,because there were a bunch of ditties in a row.  Then, by about twenty minutes in, I kept thinking that the plethora at the beginning was all there was going to be.  The show went about forty minutes with nary another note struck!

So, accept it for what it is, with no expectations. 1776 is an enjoyable show, with lots of humor and no pain. And the price at the Glendale Centre Theatre sure is right!  (I believe the absolute top ticket is only $26!) Especially for such a professional production. I can’t wait for their next one!