While I was watching the NBA Draft on Thursday, I decided to check-out what I had to say about last year’s event.  (You can read my thoughts on the 2015 draft in this space tomorrow.)  While doing so, I made a discovery: all my columns that week in 2014 were about either the draft or Wimbledon!  Wow. 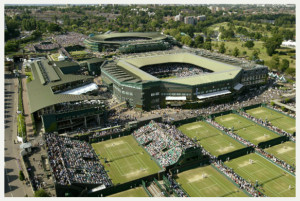 The grounds and courts configuration.

As much as I’m crazy for sports, that won’t be happening this year because circumstances are different.  (Unless something truly dramatic happens with the tennis tourney.  But then I’ll just tweet about it, so please look out for those, as well.  And, if you don’t already, please follow me on Twitter, so you don’t miss any of my bon mots. @MajorCelebrity.)  As far as I know, I’m writing just today’s intro to the 2015 Wimbledon tournament, tomorrow’s thoughts on the NBA Draft, and then the rest of the week’s topics will be other than sports.

I don’t have much to say about Wimbledon yet, obviously, (since it’s just beginning today,) expect for the usual—I’m rooting for Roger Federer.  (I’m happy to report that, at almost thirty-four, he’s the #2 seed, after a couple of years lower than that.)  (Mr. X just asked for whom I’m rooting!  Is he crazy?!  Has he never met me?!  But, he quickly gathered himself and said something to the effect of, “Oh, Roger is still your favorite.”  No, sir–he’s not my favorite–he’s my one and only!) I don’t know what I’m going to so when he retires. I may have to give up the sport myself!) (Watching it, of course, not playing it. Duh.)

I don’t have much news on the tennis situation yet, (except for the little bit below,) but I’m just telling you about it now, in case I don’t publish columns as often as I always do.  Since I watch all ten-plus hours a day of coverage, (and I’m always behind, because life gets in the way,) I have a choice of what to do with those remaining hours a day.  I can either go out to events, write, or sleep.  I have a feeling right now that my choice will always be sleep.  (Especially if I force myself to arise at 4AM to watch it all live!  By 2PM, I should be down for the count.) 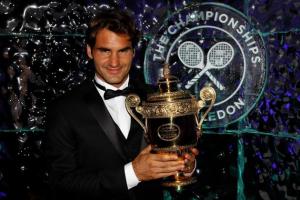 I hope this is the outcome of Wimbledon 2015! (It’s Roger Federer winning, of course!)

The one teensy bit of news I have before it starts is that Rafael Nadal is the lowly tenth seed this year!  I like him, but I don’t want him to win any more tournaments, ever, because, with his fourteen Grand Slam titles, he’s already too close to Roger’s record seventeen.  Seeding is really not the only portent of who will be the victor in the end, but I don’t know if anyone has ever won from down in tenth.  And I’m praying it doesn’t happen this year!

[Note: Spain’s David Ferrer, the number eight seed, pulled out yesterday due to an elbow injury.  (It has to be really bad for him to withdraw; he’s never missed a tournament since 2003!!!)  That won’t effect the seeding, though, because he made the decision after all of that was decided.  They just put someone who had lost in the qualifying rounds into Ferrer’s place, and go from there.]

I thought I had the good news that creepy, full-of-herself, Stepford Wife, Eugenie Bouchard, was out of the tournament, but, though slightly injured, she’s decided to compete.  In researching the topic, I was surprised to discover that I’m far from alone in my dislike of this young Canadian, who proudly declares that she has no friends on the tour!  From comments I’ve recently read, the majority is against her now.  I join the masses in hoping that she has an early exit this week. (I hope the same about big favorite-to-win Serena Williams, too, but I know that’s really too much to ask.)

Lastly, (for now,) I just read an article about the wives and girlfriends of the male players to keep an eye on.  It made me realize that we don’t often see husbands and boyfriends in the stands!  And that, outside of still-gorgeous Tommy Haas, there’s not much eye candy in tennis for me.  I watch purely for the love of the sport.  And love of the Fed-ster, of course.

That’s it for now.  I have to go start watching this fortnight already!