Trending
You are at:Home»LIVING TRIBUTE»TENNIS/LIVING TRIBUTE: ROGER FEDERER, THE STRANGER I LOVE MOST, IS NOW UNDISPUTEDLY THE GREATEST OF ALL TIME!
By Karen Salkin on January 29, 2018 · LIVING TRIBUTE, TENNIS

ROGER FEDERER, THE STRANGER I LOVE MOST, IS NOW UNDISPUTEDLY THE GREATEST OF ALL TIME!

[Note: I’ll give you guys my thoughts on the Grammys in a day or two, but first something so much more important happened yesterday.] 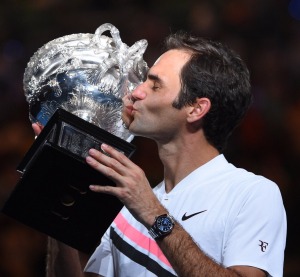 Roger Federer has just won his twentieth Major tournament title! Even non-tennis and non-sports fans should understand what he accomplished this week-end. Not only is that a record in general, but he’s the only man in history to have achieved that great feat! (Three women have done it.) And in doing so, he also won his record-tying sixth Australian Open, and defended his first title since doing that in 2008!!!

Last year, when he won his fifth Aussie Open, and record (at the time) eighteenth overall, I just put my elation over that fact in a multi-faceted column along with the SAG Awards and Miss Universe! Shame on me for that.

So this year, old Rog is getting his own tribute from me on here.

There’s so much to say about The Stranger I Love Most, but I’m still a bit overwhelmed by it all. As surreal as it is for me, just imagine what Roger himself is going through! 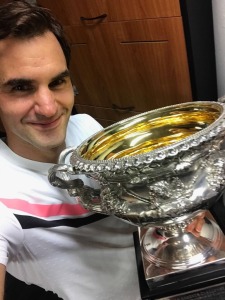 I always wonder what he must be thinking out there on the court; he’s such a superior human being, in every way, that I just assume that he can’t possibly have the kind-of thoughts that I have as I watch him play. But, in one of his post-Championship interviews, he said that while he was playing the Final, he kept thinking things like, “Maybe I will win my twentieth,” and then, “It’s probably not going to happen,” and regular thoughts like that! When I’m watching him with my heart in my throat, I keep saying to the TV, “Just remember—you’re Roger Federer!’ And then I realize that he doesn’t need me to tell him that. But now perchance maybe he does. I can’t believe that even the Great One has his doubts and fears.

So, basically what happened is that he played the Final against one of his rivals in recent years, Croatia’s Marin Cilic, who’s also a nice guy. Roger has beaten him all but one important time, in a US Open semi-final a few years back, and Marin wound-up winning that whole tournament. (So we don’t have to feel so bad for him now—he at least has one Grand Slam title, which few men do, especially in the past two decades of Roger, Rafa, and Novak Djokovic.) 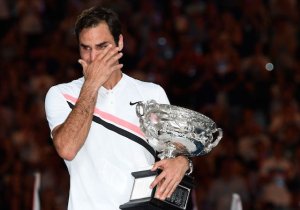 I watch every second of Wimbledon and the US Open, but, for some reason, I don’t watch any of the Aussie and French Opens. (I have to force myself to not watch sports every second of every day, year-round. So, I limit myself to just those two out of the four Majors.) But I check the progress of them every day, and keep my fingers crossed that Roger is moving along.

I would have loved to watch this important Final live, but I didn’t want to jinx Roger. I wouldn’t even let myself record it! But, as soon as I woke-up and found-out that he won, I quickly taped a re-run of the match. Actually, I recorded it on two different broadcasts! I didn’t want to miss a minute of it.

And thank goodness I did that because my heart could not have taken watching it live—it went the full five sets!!! How do their families and friends stand the tension?! And how do the players themselves do it?! 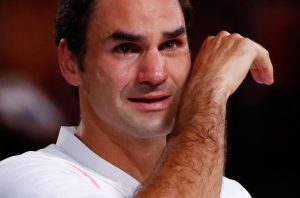 The best part to me was Roger’s speech during the trophy ceremony. I’ve never seen Roger cry that much.  But I still had him beat—I was hysterical, bordering on delirious. I had to drink a liter of water afterwards to replenish my fluids! (Yes, watching sports is like doing the work myself for me!)

I congratulate Roger Federer on his amazing accomplishment this week-end, and on his fabulous career, in general. And for once again giving us all, (except for the Cilic camp, of course,) another wonderful memory.

And from here on out, I do not want to hear any dissenting opinions on whether or not he is the GOAT! (The Greatest of All Time!) Roger Federer is, without even a scintilla of a doubt, exactly that!