The air really went out of Wimbledon for me on Wednesday when my beloved Roger Federer, The Stranger I Love Most, suffered a horrible defeat in his quarterfinal match. I could not sleep at all that night, and could barely get out of bed the next day to watch the Ladies’ semis. I’m not exaggerating. 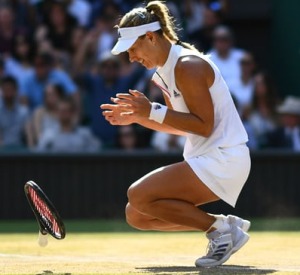 So, I don’t have that much to say about the tournament now. I am thrilled for the new Ladies Champion, Angelique Kerber. I often root for her anyway, but never more than in the Final against the creepy Serena Williams, who’s always a bad sport or a phony okay one.

And I’m happy for Mens’ runner-up, Kevin Anderson, to have made it that far, but I really wish he had won.

And I’m semi-happy for Novak Djokovic to have won again because he came so far back from an awful last two years, when we all thought it over for him. 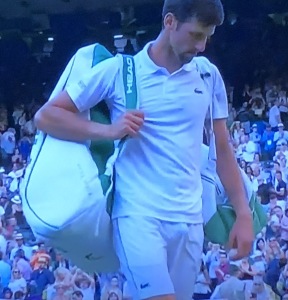 I guess Novak Djokovich was excited to win that match! Photo by Karen Salkin, as is the big one at the top of this page.

But I had forgotten about this one carry-over from last week-end, which made me dislike Novak for the rest of this week: I had forgotten what an a-hole Djokovic is when he feels the crowd is against him. In his Third Round match against Brit Kyle Edmund, whose side he should have known going in that the crowd would be on, he continually was nasty to them, blowing kisses when he won a game and inciting them in every way he could think of. He had missed the past few Majors, because of injury, so I had actually been feeling sorry for him.  But not anymore.

Now let’s go in order of this week, and then hope that Roger wins the upcoming US Open! (And remember—these are the notes I wrote each day, as the events happened.) 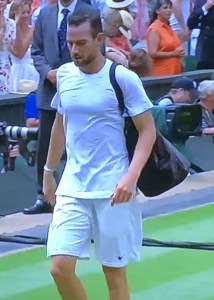 Karolina Plishkova is 6’2” but stands straighter than most any other tall person I’ve ever seen! Love it!

But she was the last of the ladies Top Ten seeds who were left, and now even she’s gone! So the winner will be someone who was seeded at 11 or lower, which is a shock. And the Final will be between two women in those positions! Wow. Talk about making it so much easier for Serena.

I don’t think I’ve ever seen a lower maintenance player than France’s Adrian Mannarino! This guy showed-up in just a non-sponsored plain white tee-shirt, (with no sponsor patches even!!!,) and just one non-full bag that doesn’t look like it has room for even one racket!!! Everyone else has a giant racket bag plus another big bag with their snacks, special beverages, change of shirts, etc.  I don’t get it. 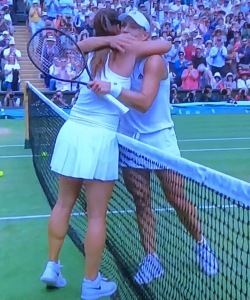 The first time I got verklempt in this whole tourney is when Angie Kerber and Daria Kasatkina hugged warmly at the net after Kerber won the most competitive match so far. That was lovely to witness.

Camila Giorgi is so cute. And I love that when they asked her what she thought of Serena before their semi-final match, she answered, “I don’t follow women’s tennis.” Tough girl.

I can’t even discuss today. (See the very first paragraph of this wrap-up if you don’t know why.)

I’ve never seen this particular bit of class before—Julia Goerges said “Thank you” to the woman who walked them in for the Semis! That’s a girl after my own heart.

Chris Evert just said that women’s tennis is more exciting with Serena Williams in it. She needs to learn to speak for herself and not make general proclamations like that because, I for one, would find it much, much more exciting without her!!! Just look at how fun it’s been for newly-crowned Wimbledon Champion Angelique Kerber to be the only female who has won two Majors out of the last eight! (Serena won only one. Let’s keep it that way.)

Why does Serena Williams wear that hideous long-sleeved pregnant-stomached dress on court, when she looks so much better in her practice gear? I assumed that she was trying to hide her arms and her stomach with that creepy attire, but it turns out that she looks thinner outside of it, so I don’t get that choice at all. And pairing it with tights in 90° just made her look pretty insane. 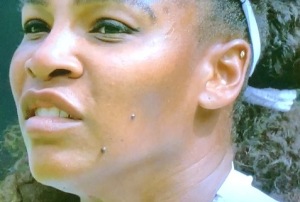 Those things on Serena Williams’ face that she does not have removed. Photo by Karen Salkin.

And, with all her money, why doesn’t Serena remove that ugly thing hanging off her face?!

Has John Isner’s lisp gotten less pronounced??? If he’s been working on it, then good for him!

But it’s funny—John and Kevin Anderson were not only the two tallest players ever facing each other in a semi, but they both have lisps!!! Maybe it’s something about the air up there!

Those were truly two warriors out on that court for that marathon match!!! OMG!

But I seemed to be the only one mentioning that if that match went even longer in the non-tiebreak fifth set, what if it went on until tomorrow? Or even Sunday?! John Isner had played that crazy eleven-hour match, over three days, about eight years ago at this tournament, so who’s to say that could not happen again? And, as I’m also the only one saying, what were they going to do about the next semi, between Rafa and Novak, because, even with the roof closed, the Wimbledon village curfew meant that they would have to stop at 11PM. And what if theirs went on until Sunday??? And why does no one think of these problems but me??? (And I was pretty correct, about it all!!!)

I think that victor Kevin Anderson felt worse for loser John Isner than he was happy for himself. I really do. 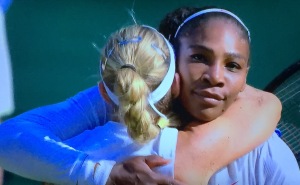 Will wonders never cease? Chris Evert pointed-out that Serena didn’t apologize for almost taking Kerber out with a violent hit! And Chris did seem disgusted by it. So, yay! Good for Chris.

It’s disgusting that first Serena yesterday and now her coach, Patrick Mouratoglou, today, kept making excuses for why she didn’t win, instead of just saying that Angie played amazing! Guess what, bad sports—Angelique was just better than Serena! Period! And she’s a nicer person, too, (which is easy to be since Serena isn’t nice at all!) Angelique’s very first post-match comment was nice words about creepy Serena, while Serena didn’t even think to mention Angie, until she was asked. Ugh. How can anyone root for that creep??? 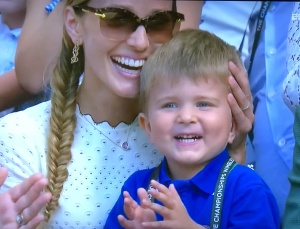 I just love this image of Novak Djokovich’s wife and three-year-old son, after his big win. Photo by Karen Salkin.

After the Men’s Final today, in their on-court televised interviews, both guys (winner Novak Djokovic and runner-up Kevin Anderson,) were so well-spoken and grateful. That was lovely to see.

And that’s a wrap for Wimbledon 2018! It will take me several weeks to get over Roger Federer not making it to the semi-finals, and then I’ll begin torturing myself with the US Open. But until then, I have to get through this week’s Home Run Derby, MLB All-Star Game, and the ESPYs. So look for my tweets about those. @MajorCelebrity. See you there!