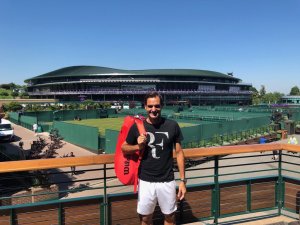 Roger Federer has arrived in Wimbledon.

Tennis is one of the weirdest sports. Just when it seems that you know where someone is ranked for all eternity, everything changes. Just a few years ago, everyone, even those supposedly in the know, was writing off the great Roger Federer, saying he would never win another tournament. Then he got injured, and, for the first time ever, had to sit out a few tourneys. But when he came back—wham–he won the 2017 Aussie Open! And then last year’s Wimbledon! And then this year’s Aussie Open again! OMG!

And now, despite his arch-nemesis, Rafa Nadal, winning his record eleventh French Open just one month ago, Roger overtook him to be back at #1 in the world!!! At almost thirty-eight-years-old! (But then, sadly, Rafa took it back last week. Even so, Roger is still the #1 seed at this year’s Wimbledon. So, yay to that!)

Also interestingly, Novak Djokovic, who just a year and a half ago looked unbeatable, is down to #21 in the world! And his arch-rival, Andy Murray, is #149!!! Wow. [Note: But Andy just had to withdraw from this tourney because his most recent injury hasn’t finished healing yet.] 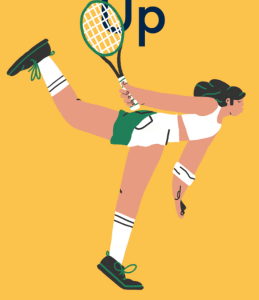 One word about the Ladies’ side: Despite Serena Williams being ranked #181 in the world now, Wimbledon bowed to pressure and seeded her! And not just at #32, the lowest seed, but all the way up to #25! I think that’s awful. She politicked to be moved all the way up because she was out on maternity leave, of sorts, not because of injury or poor performances. But I see it as being unfair to the other females. No other tennis players who have babies have had this privileged treatment before. The point is that Serena chose to have a baby, so she knew the rankings consequences of that. But it always seems that all these tournaments are scared of her, in one way or another, so now she’s all the way up there. Not fair, but oh well; nothing can be done about it about it now.

So this 2018 version of Wimbledon is very confusing. And it’s just beginning!

But what’s not confusing is this—the fact that I will rarely be communicating with anyone during these two weeks! I’ll still be posting new columns thrice weekly, at least, but that’s about it. No chatting on the phone, writing emails, or even reading the news. I will be in my Wimbledon cocoon.

But I will be tweeting my daily thoughts, and pix, so if you don’t already follow me on Twitter, @MajorCelebrity, this would be a good time to do so.

So, that’s that, and now there’s only one thing left to say for now—may the best man win, and that’s Roger!!!