This was my most successful Wimbledon in recent years! Roger Federer won, (more on him in a second, of course!,) it was interesting throughout, and…no Serena Williams!  I didn’t even mind that Venus Williams got to the final.

This is the first time in a long time that I just watched a major sporting event without tweeting constantly, or taking even one note!  I just wanted to enjoy it as it went along, and not be distracted.  So this will be a much shorter sports wrap-up than my usual ones, because it’s all off the top of my head, now that the entire fortnight has passed. 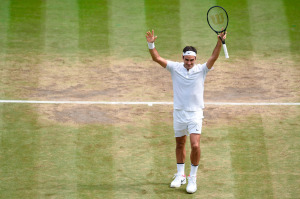 Roger Federer, (here and above,) of course!!!

And what a fortnight it was!

Roger Federer, The Stranger I Love Most, broke soooo many records there! The two most important, of course, are that he won his record eighth Wimbledon Championship, and he now is the proud owner of a record nineteen Major titles! He’s also the oldest man to have won Wimbledon, he’s now the third man in history to have hit at least ten thousand aces, and he’s the second man (behind Bjorn Borg in 1976) to have won this tournament without dropping a set! I hope even you non-tennis fans recognize just what an achievement that one is! 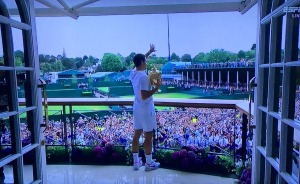 Victorious Roger Federer, greeting his throng of fans after his win at Wimbledon. Photo by Karen Salkin.

He also always appears to be the calmest person to have ever picked-up a tennis racquet. I could not sleep the night before the final, (and even delayed watching it because I was so nervous for him, although I didn’t look-up the results before I began; I just needed a couple of hours to compose myself,) but Roger looked his usual cool as a cucumber out there. I’ve really never seen anything like it. I doubt that anyone else has, either. (Even John McEnroe said that he never has, in his entire lifetime in tennis.) Roger is a true phenomena. 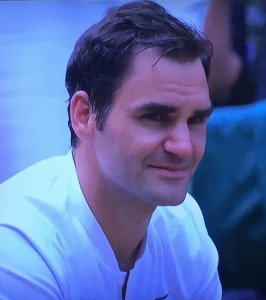 Roger Federer right after his win, and before the trophy presentation. You can tell what this victory means to him. It’s all right there on his face. What a portrait of emotion! Photo by Karen Salkin.

And it’s not like Roger’s career has exactly been a breeze for the past few years. At this same time last year, after he was defeated in the semis, (by a much lesser player, I might add,) everyone was counting him out in perpetuity. They all said that he’ll never win a Major again. He re-injured his knee in that match, and, for the first time in his career, he missed a Major—the US Open, which was the next one after Wimbledon. He even missed the Summer Olympics, a tournament he desperately wants to win, having, shockingly, never done so before. (But the 2000 Sydney Olympics was the site of his greatest triumph in life—he got together with his now-wife there! And you can always tell he’s madly in love with her! She’s never had to hold him hostage, as I do Mr. X.)

So, Roger wound-up taking six months off last year at this very time, and then came back for January’s Australian Open, which he promptly won—and in an unbelievably exciting way! Then he played a few lesser-but-important tourneys, won those, and then took the clay court season off, to be ready for the grass court one. What a smart move. And now, at almost thirty-six years of age, he just accomplished all this at Wimbledon. Wow. Just wow. 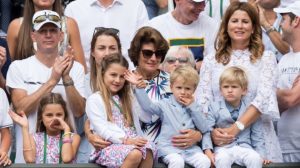 Roger’s two sets of twins, with his mom in the middle and his wife on the right.

On a side note, it was fun to see Roger’s two sets of twin children during the trophy presentation. One of the little boys did not stop making crazy faces, with his fingers all the way in his mouth. Amusing, but not the best look. Mr. X and I could not stop laughing.

Okay, enough about Roger before I start crying again. I really do get all choked-up whenever I think about him. (I’m actually tearing-up just writing this. No lie.)

So now let’s get to my very few non-Roger Federer Wimbledon notes. 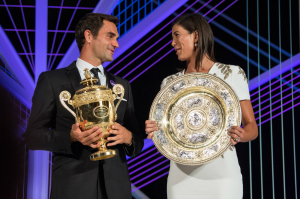 The Champions of Wimbledon 2017, Roger Federer and Garbine Muguruza.

I didn’t really much care who would win the Ladies title, although I did have a few favorites. (Aga Radwanska, Victoria Azarenka, Petra Kvitova, Johanna Konta, Angelique Kerber.)  But none of them made it to the Final. Oh well. So, I just watched that part of the Championship with no nerves. I actually was almost rooting for Venus, for the first time ever, (except when she plays her creepy sister,) and felt bad for her to have been beaten so badly by Garbine Muguruza.

But I cannot stand the ESPN commentators, who always make like the Williams sisters are the second coming!!! Venus got bageled in the second set, and they didn’t mention it even once!!!  Idiots. If that had happened to anyone else in the tournament, (it’s where one player wins the set without the opponent winning even one game in it,) they would have let us know at least a dozen times! They love to report that kid of stuff! But they’d never say it about a Williams. What a sham. 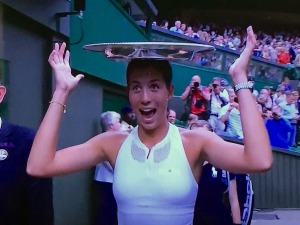 Garbine Muguruza walking off the court with her trophy dish, after she had won. Photo by Karen Salkin.

I do have to give Chris Evert a lot of credit for something else, though, which her fellow analysts did not. While watching the fourth-round Muguruza-Kerber match, she repeatedly said that winning it would change their year of the winner, in a big way. And boy, was she correct! Muguruza went on to win it all! So, good for both Garbine and Chris!

While we’re on Muguruza, I have to say that I absolutely cannot stand Mary Jo Fernadez’s pronunciation of that last name! It’s the only moniker she says with the accent of that country. It’s crazy. No one says a Russian player’s name with the a Russian accent. And can you just imagine if they did it for a German player? Oysh. Mary Jo is one of the few commentators I actually like, but that little affectation of hers just drives me up a wall. 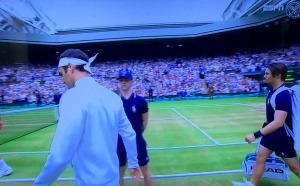 This picture is neither here nor there, but Mr. X asked why Rafa Nadal was carrying Roger’s bags onto the court, which made me laugh because it does look like him. (He was joking about the guy on the right.) So I wanted to share it with you, too. Photo by Karen Salkin.

Speaking of being driven up a wall, the creepy studio host of the channel, Chris McKendry, still says “drawL” for “draw,” and “sawL” for “saw.” What is wrong with her??? I’ve tweeted the correction to her, and the network, for years now, and she still chooses to sound like an idiot! Mr. X finally heard her do it this year, and was in shock that someone on TV doesn’t know how to pronounce those basic words! Why would you add an “l” to the end of words that don’t contain that letter??? It’s just crazy. I finally gave up on trying to help her out, because it’s like knocking my head against the wall. (She also pronounces “Murray” as “merry.” How does this woman have a job in the public eye???)

Actually, the entire ESPN team made sooooo many mistakes over the two weeks. It was bordering on egregious this year. If I had tweeted corrections to them all, I wouldn’t have had time for anything else! (In case you’re curious, the errors included using the wrong names, of even their fellow panelists!, too many times to count; giving lots of incorrect info about everything and everyone, including Roger Federer; and even calling matches wrong occasionally!) 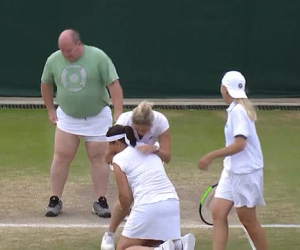 Adorable Kim Clijsters falling over her teammates with laughter, after putting her skirt on this male fan, so he could hit with them.

And they totally did not show us the most fun thing that happened during the entire two weeks. (And trust me—I watched every single second of their coverage!!! Every…single…second!) There was a “legends” (meaning retired players) Ladies Doubles match, featuring the wonderful Kim Clijsters. When when she was sort-of heckled by a chubby man in the stands as she was about to serve, she invited him on the court to take her serve. But you can’t play on the Wimbledon courts unless you’re wearing white, which he definitely was not, so she put one her skirts on him!!! (Trust me, she’ll never be able to wear that one again.) It was hilarious, but we fans know about this levity only because of the internet. ESPN really missed the mark on this one! They couldn’t have spared two minutes of their incessant babbling to show us this entertaining event???!!!

Now, back to me. I feel bad for my followers who were expecting constant Wimby updates from me, but I think that foregoing the critiquing tweets was actually good for me this year because I didn’t waste extra time on doing all that. Nor taking my usual copious notes. I just let the action unfold, and watched it like a normal human being, not like the journalist I am. 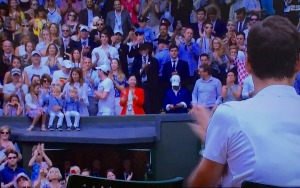 Roger, (whose back we see on the right,) waving to his family up in the stands, after he won. I love this picture! Photo by Karen Salkin.

And even though I felt bad to my body to be sitting on a couch for so many hours a day, I exercised my mind during the tournament by doing hard crosswords, which is what I always used to do during slow sporting events, before I became technology-obsessed. That was a good activity for me because, since I was always hours behind on Wimbledon, (because it began each day at 4AM, my West Coast time,) I couldn’t even read any news until each day was over, which was often the middle of the night for me. On one occasion this year, I even stayed up overnight to get caught-up, and then begin on time that morning!!!

I do have one little complaint about this Wimbledon—I got cheated. Usually I would be happy to watch all of finalist Marin Cilic’s matches, because I’d be treated to little glimpses of his gorgeous coach, Goran Ivanisevic.  But Goran was nowhere to be seen this tournament, and the commentators made no mention of his absence until the very end, so I didn’t even know that those two are not still working together.  Goran’s absence was such a loss for my eyes.  And soul.

But, above everything else, major Congrats to my hero, Roger Federer! What a guy!!!