Here we go again, with a major sports hibernation for me!  I always do nothing for these annual two weeks outside of watching every second of this Major tennis tourney, but my heart just isn’t much in this year’s US Open. That’s because Roger Federer won’t be there, due to the fact that he exacerbated his recent knee injury in July’s Wimbledon tournament. I seriously feel as awful as if it were happening to me! 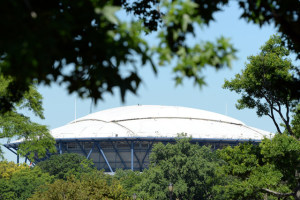 [Note: This is what he wrote on his site a month ago, which I don’t own enough tissues for: “I’m extremely disappointed to announce that I will not be able to represent Switzerland at the Olympic Games in Rio and that I will also miss the remainder of the season. Considering all options after consulting with my doctors and my team, I have made the very difficult decision to call an end to my 2016 season as I need more extensive rehabilitation following my knee surgery earlier this year. The doctors advised that if I want to play on the ATP World Tour injury free for another few years, as I intend to do, I must give both my knee and body the proper time to fully recover. It is tough to miss the rest of the year. However, the silver lining is that this experience has made me realize how lucky I have been throughout my career with very few injuries. The love I have for tennis, the competition, tournaments and of course you, the fans remains intact. I am as motivated as ever and plan to put all my energy towards coming back strong, healthy and in shape to play attacking tennis in 2017. Thanks for your continued support. Roger’]

But, despite that disappointment for oh so many of us tennis-and-Roger aficionados, this one should be a bit more interesting than the usual US Opens because it’s happening so soon after the Rio Olympics, which were just filled with drama!  I think that everyone in the world thought it was a foregone conclusion that Novak Djokovic and Serena Williams would both win the singles gold medals.  But not even close!  Novak lost in the very first round, with Serena close behind.  On top of that, Serena and her sister Venus lost in the Ladies Doubles early on, as well. Wow, to it all. 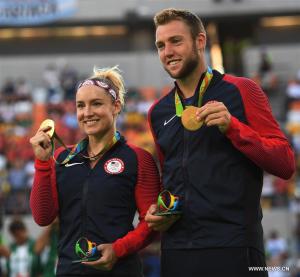 Venus did wind-up winning the silver medal in the Mixed Doubles, with her partner, Rageev Ram, but to an uber-unsung American duo of Jack Sock and Bethany Mattek-Sands, people who never go far in the Majors.  The whole thing was just crazy.

And, speaking of unsung, how about Puerto Rico’s Monica Puig? The thirty-fourth-ranked player in the world won the Ladies’ gold! Whaaat??? Playing the #2 woman for it!

The only semi-normal result was Andy Murray winning the Men’s. But it was over Argentina’s Juan Martin del Potro, who, shockingly (since he just recently returned to the tour after years of wrist problems and surgeries,) had taken-out both main man Novak Djokovic and the always dangerous Rafael Nadal! Seriously, the Olympic tennis competition was downright wild!

So, all those crazy results leave me wondering just what will happen at this US Open.

After their Rio debacles, I had (erroneously) predicted that the Williams girls would sit this one out. Neither one of them needs the victory right now, and they know that they’ll constantly have to hear about how they flamed-out in Rio. But I thought maybe Venus would still go. After all, she did win a medal, and she hasn’t been as touted as Serena for years now, anyway. But I know that Serena will hate hearing her recent failures being discussed ad nauseum.

It will be like the aftermath of when she threatened that linesperson at the US open in 2009. (If you’re curious about the incident, you should really read the deets here, by me right at the time: itsnotaboutme.tv/news/sports, and then this very interesting follow-up I found: content.usatoday.com/communities/gameon/post/2012/08/serena-williams-will-never-be-sorry-about-open-outburst/1#.V74RscdyjzI.) She knew how even the usually fawning commentators reviled her at that point, so she sat-out the next year’s US Open due to what the press called a “mysterious foot injury.” She (in my opinion) fabricated a tale of cutting her foot in a German restaurant, which kept her out of the Open, (where everyone would have inevitably brought up her rotten episode the year before.) But she didn’t know the name of the place, and didn’t sue them, even though not playing for that period cost her millions of dollars. It sounds to me like she just didn’t want to be under scrutiny at the US Open then. 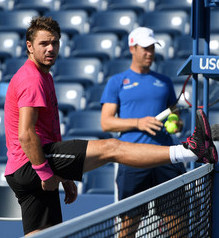 My hope for the win, Switzerland’s Stan Wawrinka.

And it worked! So, I thought that maybe she’d also come up with something else to lie low now, so that she wouldn’t have to hear about her recent failed Olympics. But it looks like she’s surprising me, and is playing, anyway. I just hope that they all mention her Rio failures as much as possible.

Forgetting all that, one interesting thing to look for at the 2016 US Open is the new roof over the major court. That should really cut down on the many rain delays this tournament always suffers.

Lastly, I don’t have a dog in any of these races for the first time in well over a decade, (since Roger came on the scene.) I can only root against people, which I hate doing. I wouldn’t mind if Roger’s countryman Stan Wawrinka wins the Men’s title. I just want anyone to win, except for Novak, Rafa, and Serena. So, go everybody else!