The US Open, my second favorite tennis tournament to Wimbledon, begins today. I’m always happy to watch it. But this year will be a tad different, in several ways. 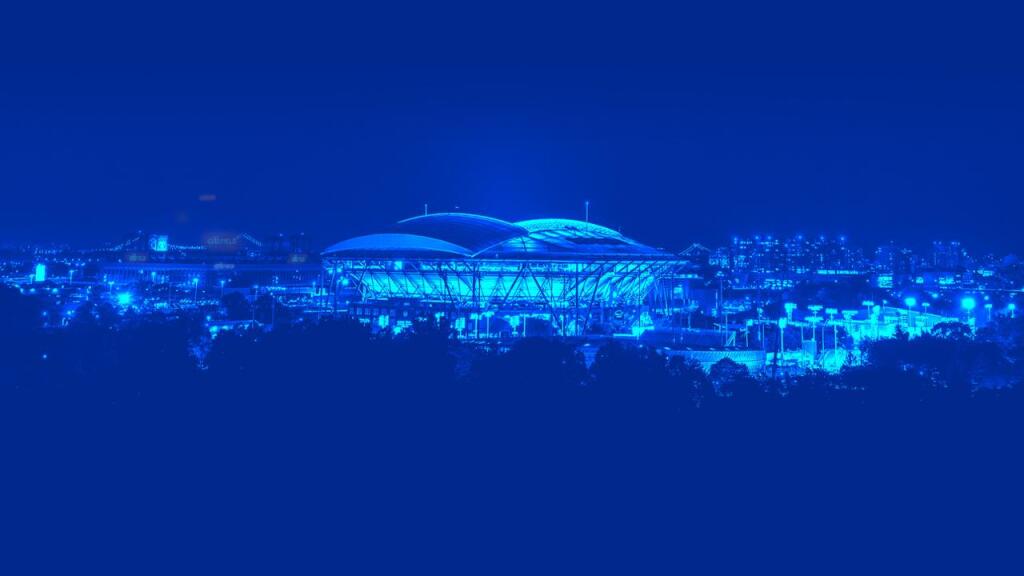 The US Open at night.

First of all, I’m a little disappointed with the powers-that-be over there right now. That’s because…they’re letting full crowds in! I think that the population, in general, just cannot deal with Covid anymore, (which I’ll cover in an upcoming article,) and are choosing ensemble to ignore the dangers. Yes, this tourney does take place outdoors, (unless they close the roof for a bit,) but that’s it. Even though there’s a statement on the US Open site declaring, “…all fans aged 12 and older will now be required to show proof of at least 1 dose of a COVID-19 vaccination to attend the US Open,” there’s no way that any venue can totally control the unvaccinated from coming in. No ticket-takers are scrutinizing the vaccine cards that will be flashed at them, to see if each attendee is really the person on the card. People borrow cards and even buy them on the internet. Anti-vaxxers are so righteous, but they’ll feign having done the right thing when it benefits them. Disgusting.

On top of that, with a crowd that big, there’s no social distancing. Mask-wearing can’t even be enforced because no usher can watch everyone. Nor would they want to confront any of those morons—that’s taking your life in your hands; those anti-vaxxers are insane!

Outside of that, my heart has really gone out of tennis recently—there’s no one left for me to root for, only against. (I’m talking to you, Novak Djokovic.) 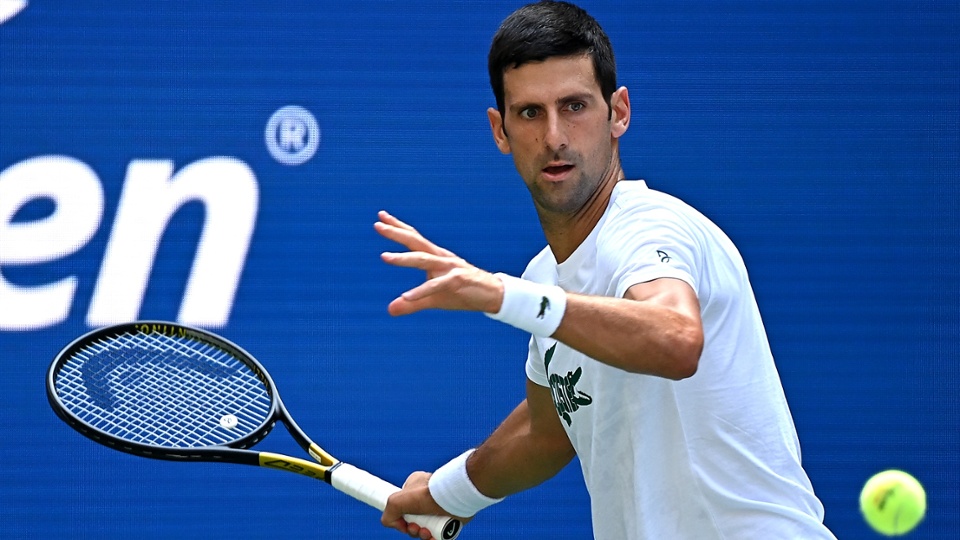 Look at the crazy look in Novak’s eyes. And this is just practice!

And that’s because The Stranger I Love Most, Roger Federer, is out of the US Open to have yet another knee surgery. I’m so sad for him. At forty years of age, even I accept that he might finally retire; he’s a gazillionaire, with a big family he adores, and a very charitable foundation to look after, and a thousand and one commercial endorsements. He even started a company where he and his long-time agent manage athletes.

So, at this point, he doesn’t need to play competitive tennis anymore. But I know he doesn’t want to go out this way. So I predict that he’ll come back for one more Wimbledon next year, and retire there. I’m so sure of it that I’m stocking up on tissues for next summer as we speak! I don’t think I’ll be able to handle it.

My one gigantic regret is that I’ve never seen Roger play in person. That’s a loss for me. As will his permanent absence from the game, whenever it comes, be for tennis fans everywhere. (Even my little mother in heaven, to whom I pray for help for him every time he sets foot on a court, will be crushed!) 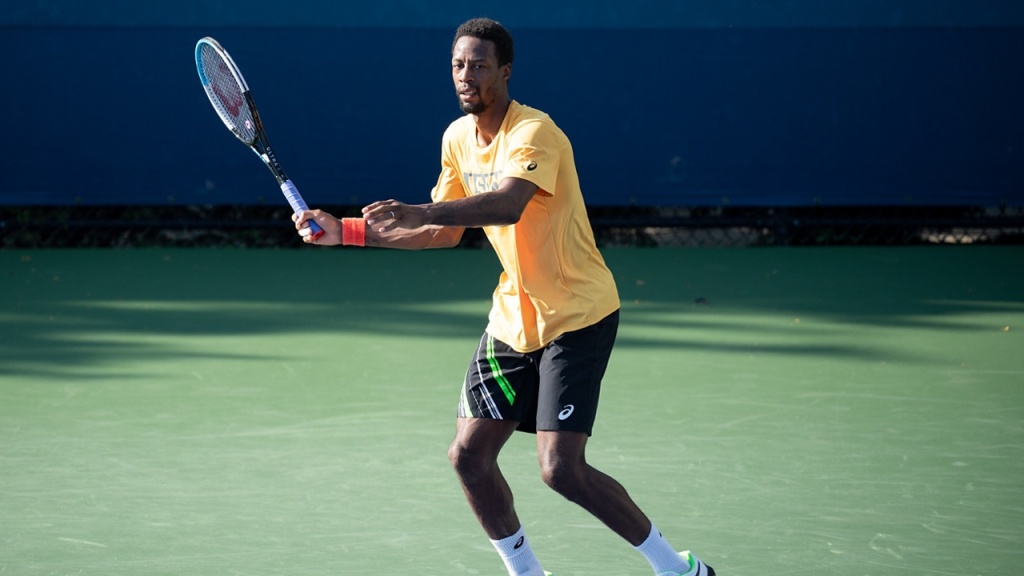 But to be optimistic, my next two fave players, Nick Kyrgios and Gael Monfils, are competing in this US Open. (Knock on wood.) But the latter is also old, and hasn’t won a major since he was a junior and won three out of the four Junior titles. And even though all the analysts say that Nick is the most naturally-gifted tennis player in ages, he doesn’t want to work at it, which I respect. He doesn’t have that drive and killer instinct. He’s in it for the entertainment factor, and people love him for that. I can watch every second of his matches without looking away for even a moment. (I admit that I do crossword puzzles while I watch everyone else, even Roger, but in his case, it’s because I’m too nervous.) If Nick can make a lot of money, and have fun doing it, with a modicum of effort, I say good for him. (But he’s coming into this one injured, and has a very hard first round, against Spaniard Roberto Bautista Agut, so I don’t know how long I’ll get to see him in these next two weeks.) 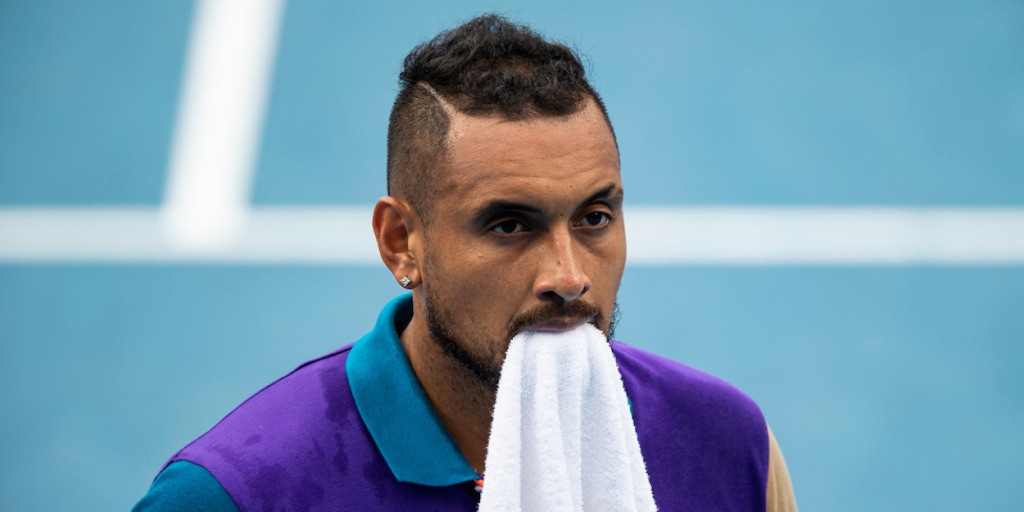 On the news front, in addition to Roger, this US Open will be without a whole passel of tennis stars this time. The most notable other absence is Rafael Nadal, who’s still out with a recurring foot injury. Another former Champion of this tourney, Stan Wawrinka, is out with the same problem. And defending champion, Dominic Thiem, has withdrawn due to a wrist injury; he’ll be out for the remainder of the season because of it.

On the ladies’ side, Serena Williams is sitting this one out, but I feel that it’s really forever. As much as she’s desperate to have the record number of wins in history, (which she’d tie with one more and take the lead with two victories,) with all her money and enterprises, she’s probably thinking, “I don’t need this stress anymore!”

She currently has a hamstring problem which she says she suffered at Wimbledon. But I think she went into that July tournament with it. My theory is that Serena knew she’d have to drop-out, but she wanted everyone to see her “get injured” and feel sorry for her, instead of us suspecting that it wasn’t real, like the imaginary foot injury she supposedly had years ago, when she wanted to deflect attention away from her criminal-bordering behavior at the previous US Open! (If you don’t know what I’m talking about, this explains the incident that preceded her “cutting her foot in Germany, in a restaurant” whose name she couldn’t even remember the next day!: itsnotaboutme.tv/news/sports.) 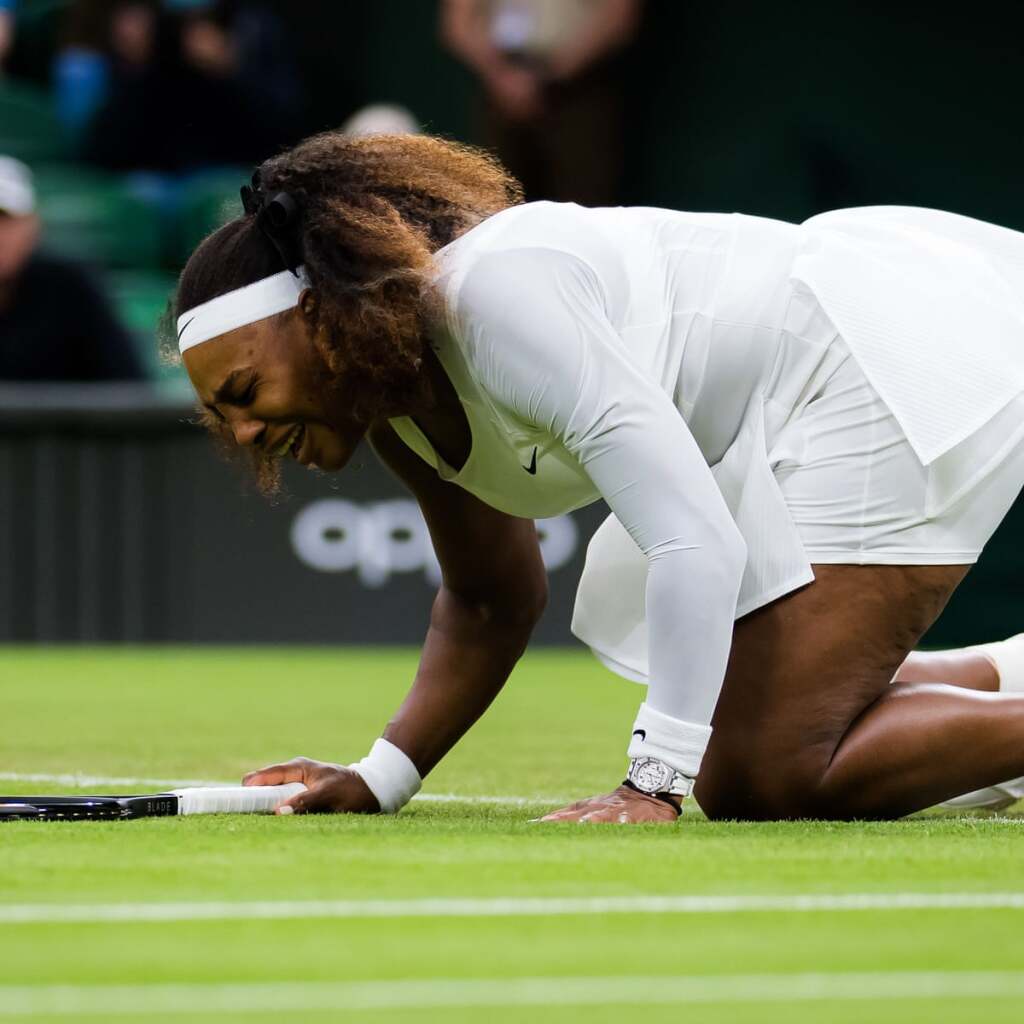 And just a few minutes after Serena’s announcement, her big sister Venus Williams withdrew, as well, citing a leg injury.  She hasn’t played much in recent years, especially this one, and is now ranked #147 in the world! What a supreme fall from her glory days! And Venus just lost in the first round of a warm-up event, to not a great opponent. At forty-two, with tons of money, I really think it’s time for her to pack it in already. She doesn’t need to prove anything to anybody—she’s already a Champion, several times over. If she needs the adrenaline rush of playing tennis, there’s always the senior tour. I’m not joking about that—it’s legit! You really have to read the room and know when to exit stage right. (And all the other retirement cliches!)

With Serena out, there seem to be no females to root against anymore. For some reason, I’ve never quite cottoned to Naomi Osaka, (it could be her prevalent use of, “Um,” or maybe her abuse of the press,) so she may be the one for me. I like just about everyone else on there. 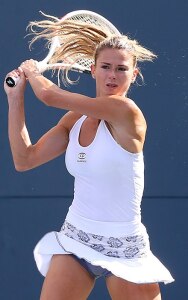 Camila Giorgi, in one of her many cute outfits.

And it looks like Simona Halep is back, which is a good thing for tennis. But her first round match will be a hard one for me. Her opponent is Italian Camila Giorgi, for whom I’ve always rooted for two reasons—she’s adorable and has the absolute best outfits all the time! I knew that her mother made them, so I pictured a little old Italian woman slaving over a tiny sewing machine in her kitchen. But I just found-out that he mom is a fashion designer! How have I not known that?! And the other thing I recently discovered is that Camilla is…Jewish! With so few Jewish athletes in the world, (you know the old joke, don’t you?: What’s the thinnest book in the world? The Book of Jewish athletes!,) that gives me even more reason to continue rooting for her.

Here’s another thing that could make the US Open different this year: I’m waiting to see if this one looming issue will finally be discussed at this tournament. (One of the McEnroe bros uttered one cryptic sentence alluding to the situation during the Wimbledon coverage.) No one seems to want to address the possible domestic violence (with probable proof) of Germany’s Alexander Zverev on at least one of his girlfriends! (One of them has eyewitnesses and police reports, while the mother of his baby won’t even let him see the kid! So what does that say about him?!) I have no idea if the allegations are true, but they’re so serious that someone high up in tennis should look into them. (I hope they’re not true because Alexander just might be the only guy who can defeat Novak Djokovic, as he just did in the Olympics!) [Note: A lesser player, Nikoloz Basilashvili, is about to go on trial for the same charge against his wife in his country of Georgia later on the year.] 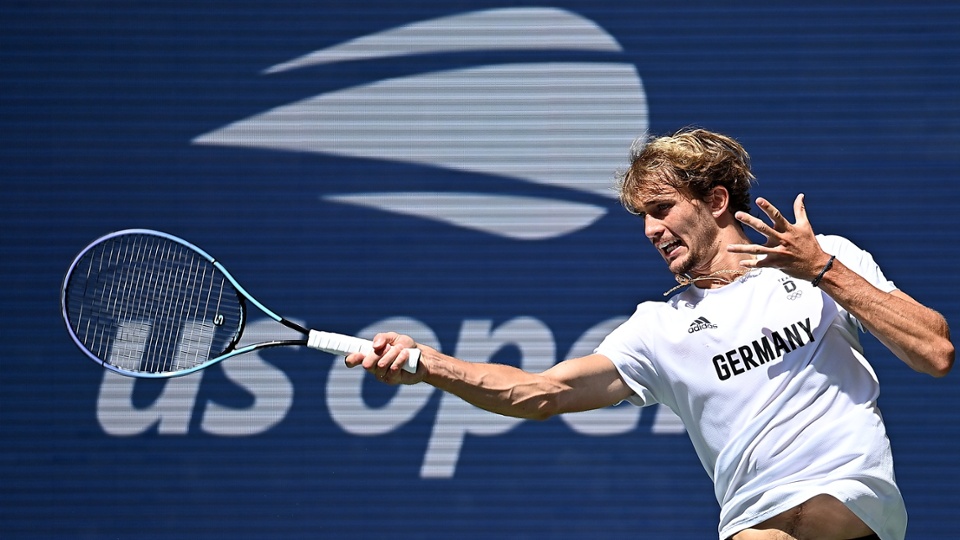 Okay, I hate to put it in writing, but the big deal about someone being able to defeat Novak, and the main reason I’m rooting so verily against him is this: If he wins here, he’s one of the few men in history to win the “Calendar Slam,” which means all four Majors in a calendar year. It’s truly an amazing feat, one that neither Roger nor Rafa has achieved. So I don’t want to Novak to do it, even though I’d be witnessing history. (Yes, I am biting my tongue. And my fingers for even typing those sentences!)

My penultimate topic for the US Open is their new statement on mental health, which reads, “For 2021, the US Open’s already comprehensive medical care system will evolve to include a number of new initiatives aimed at providing best-in-class mental health support to players. The USTA’s Mental Health Initiative will ensure that a holistic approach is taken with all aspects of player health, including mental health.” Good for them. Helping anyone with their mental health is sooo important, especially nowadays. 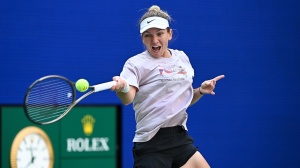 Simona Halep, back in action.

But I hope that all that doesn’t mean that they’ll excuse players from talking to the press after their matches, win or lose. Without the media, no one would even know who these athletes are! (If a tree falls in the forest…) And journalists have their own jobs to do, as well. They can’t say that they don’t feel like interviewing a player because they themselves are having a bad day! It’s their job to interview the athletes, just as part of the athlete’s job is to be interviewed by the press. It’s a symbiotic relationship, and just because one [insert your own assessment here: spoiled brat, fragile, privileged, troubled, or trouble-making] player (read: Naomi Osaka) wants to skip the post-match pressers should not negate that imperative give and take!

And lastly, I recently heard a crazy rumor about one of the players from, of all people, my new gynecologist! So, first of all, no one knows anything for sure, unless they were part of something or witnessed it, and secondly, this is a good time to remind everyone that, for every single thing in life, (outside of science, of course,) a good rule of thumb is to believe half of what you see and nothing of what you hear!