Trending
You are at:Home»TENNIS»TENNIS: THE 2020 US OPEN BEGINS TODAY (BUT I DON’T CARE MUCH RIGHT ABOUT NOW)
By Karen Salkin on August 31, 2020 · TENNIS

First of all, these days I have to force myself to get started on each sport I’ve always loved. Once I begin, though, as with the current NBA Play-offs, I do get back into it in a big way. But with so much going on the world, it is hard to get started. And with so many people sick and dying, (and rioting and being killed,) it just feels frivolous.

Now that I’ve sufficiently brought the room down, let’s talk tennis, shall we? 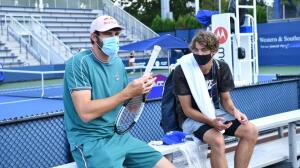 American tennis players Reilly Opelka and Taylor Fritz getting ready for the US Open. At least they’re wearing masks.

In a move I totally disagree with, the US Open is going ahead for the next two weeks. The French Open was postponed in May, and the July Wimbledon tournament was cancelled altogether this year. (Big props to those two.)

So I absolutely cannot understand why the New York-based US Open would choose to go ahead in the middle of a global  pandemic!!! That’s such an irresponsible decision. Do they feel that playing, or working with, tennis is worth risking lives?! It appears so. That’s just insanity. Frenchman Benoit Paire, the #17 seed, just tested positive yesterday! And one of the fitness trainers did, as well. I’m expecting the dominoes to start falling pretty soon.

To take at least some precautions, there will be no spectators, which is as it should be, but makes the whole shebang extra crazy. I guess the players will have to dig way back into their beginnings and bring up sense memories of how to deal with that circumstance. But it makes it sad to watch. Especially because it will be a constant reminder of the all the misery that surrounds us now. 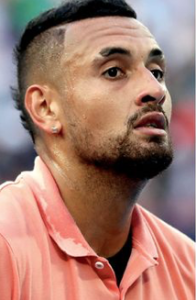 Nick Kyrgios is as upset about all these sports happening during the pandemic as I am, so good for him!

The field of world class athletes has been very whittled down by the brighter ones declining to risk their lives, and those of their team members, by staying put in their own countries. Some of those smart ones are, on the women’s side: World #1 Ash Barty from Australia, and Simona Halep, Elina Svitolina, reigning US Open Champion Bianca Andreescu, and Kiki Bertens, who are #s 2, 5, 6, and 7, respectively. Chief among the wise men are: very entertaining young Aussie Nick Kyrgios, #2 Rafa Nadal, and, of course, the most mentally stable athlete in history, The Stranger I Love Most, my beloved Roger Federer. (Okay, old Rog is also nursing a knee injury, so he would have probably had to sit out anyway.) Always outspoken Nick wisely stated, “Think of the other people for once, that’s what this virus is about. It doesn’t care about your world record or how much money you have.”

The bad news, for me, is that, with so many top females not playing this tourney, and Naomi Osaka incurring a hamstring injury last week, (which forced her to drop out of the Final of the warm-up tournament,) it gives always-bad-sport Serena Williams more of a chance to win it all, which makes me sick. She’s the #3 seed, but could have been beaten by Ash, Simona, or Bianca. After all, those and more have done it in the recent past. Let all us fairness-lovers root for Naomi to get better in time! 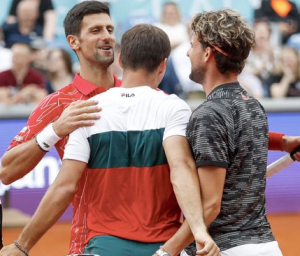 Novak Djokovic (facing us) running his own tennis tourney that should be nicknamed “The Coronavirus Tour” because he had the virus and spread it to others.

And on the men’s side, #1 seed Novak Djokovic has a clear path to win it all again, which also makes me sick.  I’ve stuck-up for him for sooo many years when others always deemed him to be obnoxious, and worse. I thought of him as just funny and driven. But when he hosted a  recent tournament in his native Serbia, right smack dab in the middle of the the Covid threat, catching the virus himself and giving it to some of his fellow competitors, I lost all respect for him! And he’s an anti-vaxxer, to boot, so there’s that. I’m just praying that one of the young bucks can defeat him now. (And always, actually!) 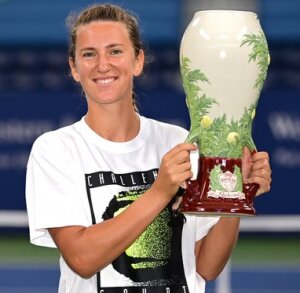 Glowing Victoria Azarenka with her trophy the other day, her first in four years!

But there are still a couple of people to root for.  The only really good news is that we get to see the lovely Kim Clijsters play again! I hadn’t realized until this morning that she’s back on the court after many years of retirement! So of course, I’d love to see her win the whole thing!

Then we have young American Sofia Kenin, who was the surprise winner of the only tournament in 2020 so far, the Australian Open, and is the #2 seed here. She could become the only female Majors Champion of 2020 with a win here! (And I have a feeling that most of you have never even heard of her. Am I right or am I right?) And I always hope that Victoria Azarenka will triumph. I’ve been a fan of hers from the get-go. As a thirty-one-year-old now, she’s been through a lot, and could have easily retired from tennis at several points in her career. She just won the Western & Southern Open the other day, so I really hope that bodes well for her at this one. Another one of my faves is the always-lovely Petra Kvitova, and I also root for Karolina Plishkova, who has now moved up to be the #1 seed in this tournament. I would love for Kim, Victoria, Petra, or Karolina to win! (But I still feel that playing pro tennis is not worth risking one’s life.)

I just realized that those five ladies are just about the only bright spots I can think of. It’s dawning on me that when Roger Federer finally retires, (bite my tongue,) I think he’ll be taking my tennis-watching-fervor with him! The only thing that can save that sport for me is if he becomes a commentator. To hear his lovely, intelligent speech will be such a pleasure, (and such a change from the norm!) 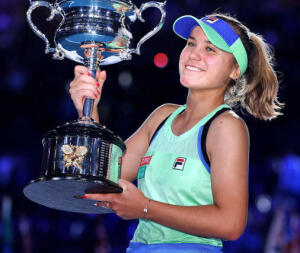 Sofia Kenin with her Aussie Open trophy in January, right before the world went all haywire.

So, with me being so into the NBA Play-offs, that are, for the first time in history, running concurrently with the US Open, along with me taking a peek at the Yankees and Mets games when I have a free moment, and continuing to pen these columns, and doing all the cooking for Mr. X and me, (which has been the norm during the entire pandemic—oysh!,) this will be the first year in decades that I don’t watch every single second of the tennis. But don’t feel bad for me—at least I’ll be spared having to listen to idiotic mispronouncer, ESPN tennis host, Chris McKendry, continually say “sawL” for “saw” and “drawL” for “draw.” And now that Andy Murray is back playing, she’ll be calling him “Andy Merry,” and not as a cute thing. That woman needs speech lessons, pronto! So, I’m happy to give my blood that break from boiling. (It’s been boiling enough, to the max, from seeing the LA Clippers’ Marcus Morris, the dirtiest player I’ve ever seen, continuously harm the Mavs’ wonderful Luka Doncic! I plan to explain more later this week, if I can clam down enough to write about it.) 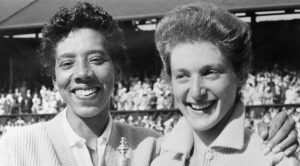 Lastly, since there was no Wimbledon this year, which is when I was going to tell this tale that has recently come to light, and amid all the ethnic turmoil of the current day and age, this is the perfect time for me to make everyone aware of this horrible anti-semitic and racist situation in the storied history of that tournament. It pains me to say it because I’ve always been such a fan of Wimbledon, but they should be ashamed of themselves for the anti-semitism and racism of which I’m about to tell you. Even though winners of that tourney are traditionally given lifetime membership in the All England Club, neither of the female doubles winners in 1956, American Althea Gibson and Brit Angela Buxton, received it because the former was black and the latter was Jewish! Shame on the All England Club!

They were both put on a waiting list, which they never got off for the rest of their lives. That is so disgusting. The official word on “Membership of Club” on Wimbledon’s own website is, “Honorary Members elected by the Committee and mostly past Singles Champions and other people who have rendered special service to the sport.” These ladies were both Champions, (although of doubles,) and they definitely both rendered special service to the sport. And I repeat—Angela was one of their own countrywomen!!! 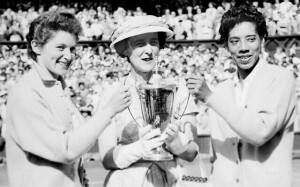 The only reason the world is learning of this now is because Angela died recently, a day before her eighty-sixth birthday, with still not being granted membership! There’s nothing that the powers-that-be in England can do to rectify the situation now, but they need to address it somehow, and mea culpa themselves. She was even inducted into the Black Tennis Hall of Fame! That’s because of her doubles partnership and friendship with Althea Gibson, for whom she raised money when Althea was failing towards the end of her life. Here’s the link to one brief story about Angela and her Wimbledon club exclusion, which I encourage you to read: www.jta.org/quick-reads/british-tennis-champ-says-she-was-denied-club-membership-due-to-anti-semitism.

Whew. Enough with all the real-life tsuris already! (That means “aggravation” in Yiddish, which I used in tribute to Angela’s ethnicity.) Let’s get back to the diversion from real life, although no less irritating, watching sports!