First, I must apologize to you guys for my less-than-daily postings recently.  I’m trying not to let my hand problems interfere with ItsNotAboutMe.TV, but there are just too many days this summer that I can’t function at all because of them.  I’m trying to get caught up this week, with three current pop culture topics, (with the greatly appreciated aid of my dictation device,) and then next week, we’ll move on to all the Emmys Week activities, peppered with a few new theater reviews, followed by tons of new film reviews.  So, please hang in there with me just a little longer, and we should be back to speed before we know it, (although it can’t be soon enough for me.)

First up this week is this past week-end’s Miss America telecast.  I was thrilled to see it was: a) back on network TV, b) back in atlantic city, and c) back on in September!!!  I hated that they had moved it to January for a few years. When I was a little girl, the end of summer really depressed me, except for that I knew Miss America would be on!  I love this grown-up pageant stuff!!! (But only Miss America, Miss USA and Miss Universe; the rest are baloney with which I would never bother.) 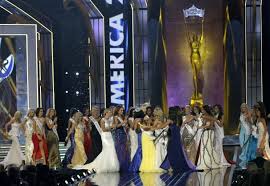 Notice the crown being held up in the background; that’s what the semi-finalists stood in front of, which made it look like the crown was on each girl’s head. Such a clever touch!

And I loved that when they chose the Top Fifteen, and each girl walked to a section of the stage for her single shot, if she landed on the correct mark, the crown on the backdrop made it look like it was on her head. That part was fabulous!

Those are the main positives; but there are several negatives with the new format, as well.  The whole thing is basically kind-of rude and barbaric.

I hated the way they do a few portions of the competition, especially the talent. They started this new format either last year or the one before, and this is how they now organize that category: at that point in the show, there are still twelve semifinalists. They have them all get ready to perform, and then they have to sit on the side of the stage, in full view of the audience, and wait for their names to be called. Then they have to jump up and perform right away, with out any recent warm-up.

And that’s not even the worst part! They leave two of the girls out! And that duo doesn’t even find-out until the end the talent portion, when the tenth girl’s name has been called to perform. That is so rude of them. They couldn’t let us see just two more talents?! Whom exactly would that hurt? I’m sure they do it this new way because of all the stupid reality shows nowadays, where rude equals entertaining, but the Miss America producers should really consider the feelings of the contestants more. They should be way more respectful to these young ladies who work their butts off to get to this point.

I also hated that the girls never got to walk out and say their names to cheers and applause at the beginning of the telecast, because someone thought it was more interesting to film their introductions on locations around town. I’m sure that was part of the deal of doing it in Atlantic City to begin with, to give the town publicity.

But unfortunate sections of the show aside, I did get a tad verklempt when it got down to two dancers vying for the crown. Or should I say “tiara.” I had just told Mr. X how, when I was little, I always rooted for a dancer to win it, and could never understand how that wasn’t happening. I didn’t realize that they’d always rather some less talented singer win so she could do her talent, or lack thereof, at all her obligatory post-win appearances. 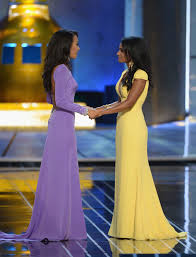 The final two contestants. Miss California on the left and Miss New York, the eventual winner, on the right. Those gown colors make my mouth water!

So I was thrilled that the final two were dancers, which is what I always was, and from my two home states, New York and California! And in colorful dresses, to boot! Miss California was wearing a gorgeous shade of lavender, like I painted my room in Brooklyn all those years ago, and although I’m not a fan of yellow, Miss New York’s sunshiny gown looked scrumptious standing next to Miss California’s lavender one. This was the final two I had dreamed of since I was five! (Yes, I’ve been watching Miss America that long. I can run the category of Beauty Queens on Jeopardy every time!)

Also of interest to me, and other Miss America aficionados, was that the title was given to two Miss New Yorks in a row! That rarely happens, the same state scoring back-to-back victories, even one as powerful as New York. That fact was giving me hope that the winner would be Miss California, to whom I was partial because she is a ballet dancer, (rather than a Bollywood one,) and a gorgeous one at that! 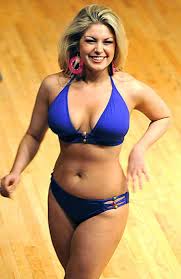 This is how chubby last year’s Miss America became. Loving it!

Speaking of Miss-New-Yorks-who-became-Miss-Americas-two-years-in-a-row, last year’s winner, Mallory Hagan, is so chubby, and not Miss America-looking at all, which was actually great to see. And she was the least full-of-beans one I think they’ve ever had! I hope she’s really successful now that her reign is over.

Now to the whole Asian-winning controversy: As I just mentioned, the final two were really my favorites because they were attractive, spoke intelligently, and actually had talent. (Some of the singing was downright brutal, including a girl who had just learned opera a month before and thought she could pull off Nessun Dorma!!! How delusional was that?!) But before I would have even thought that Nina Davuluri winning would be accompanied by a huge racist backlash, I thought it was really funny that Ms. India New York was performing a Bollywood dance number. I said to Mr. X, “Nothing says America like a native dance from India.” So, I can see a tiny bit why some people thought that it was a little strange that she won. Could a basic Caucasian of  American descent win the Miss India contest, I’m wondering? Probably not. 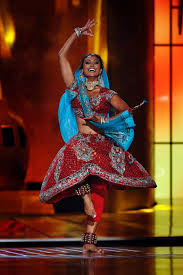 This year’s winner, performing a Bollywood dance number as her talent.

But, America has always been known to be a melting pot, and all young women in the required age range who are American citizens can become Miss America. Period. That should be the end of it. Nothing else should matter except that they meet all the criteria. This girl, Nina Davuluri, is beautiful, intelligent, and talented. So props to her, and to the judges who awarded her the crown.

Last thought on this topic—when a black girl wins, which has happened before, most people don’t say anything anymore because they know they would look racist. But everyone seems to think it’s okay to go after a girl of Indian descent. This world is so crazy now.

So, I feel that the Miss America organization needs to change how they do some of the eliminations throughout the competition, but that’s my only complaint. This year, the show actually moved along pretty well, and, shockingly, most of the girls were very attractive. Since Miss America has always been touted to be the biggest scholarship program for girls of that age, actual beauty was never a pre-requisite, as it is with Miss Universe and the competitions within that organization.

But, I love how his contest always makes believe that the bathing suit competition is about being physically fit, rather than looking hot in a bikini. (Yeah, while the hosts were trying to sell us that line of BS this year, in the same breath they were mentioning how many guys tuned-in just to see that part. Hypocrites.)

Okay, that’s it for Miss America 2014. With not much to make fun of on this year’s telecast, I’m surprised I was able to make this review this long! So, props to the girl who won; may she have a fabulous year. And may she be the first in a long line of dancers to win! Or maybe even a ventriloquist or two.