It’s been pointed out to me recently that I haven’t yet reviewed this season’s crop of talent shows! (I actually did do so for Dancing With The Stars in the first two weeks, which you can read here: itsnotaboutme.tv/news/televisionkarens-rants-dancing-with-the-stars-season-17, but not since then.) So, without further ado, here are some of my thoughts on all three of them.

This show is desperately in need of something like a “judges’ override” because the results recently have just not been fair. There are five couples left now, and after next week, four of those will be in the finals. Out of those five, three of them basically suck! It’s actually offensive that good dancers Elizabeth Berkley, Christina Milian, and Snooki have gone home before the entertaining but not-very-good-dancing Jack Osbourne and Leah Rimini, and the absolutely dreadful, joke of a contestant, Bill Engvall. 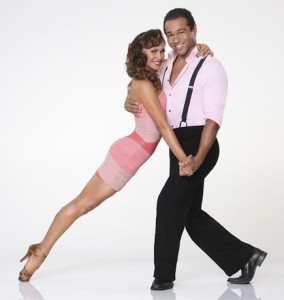 Corbin Bleu and pro partner Karina Smirnoff, who deserve the win this season.

The way the show is structured now, it allows the “vote for the worst” mentality to rule because the results are a combination of judges’ marks and viewer votes. So smart alec viewers can use all their votes on the worst dancers, just to mess with the results. It’s just disgusting that so many creepy people can make a shambles of these shows. I’m sure there are more than a few people who vote for the worst dancers, just to screw up the results as much as they can. And then there are the viewers who vote for only the celebs they are a fan of, even if those people can’t dance. Those votes should be reserved for the People’s Choice Awards, not for a talent competition.

The judges are not completely blameless in this debacle, either. Their marks are often skewed, too. How they could’ve given Jack Osbourne two tens for a semi-pitiful waltz, when they gave Amber Riley and Derrick Hough’s fabulous waltz eights, is impossible to figure out.

But even with their sometime-idiocy, they seemed genuinely shocked on Monday night when Elizabeth Berkley and Val Chmerkovskiy were the couple eliminated, especially immediately after the couple received a perfect score of thirty from them.

Worse than anything, though, is having the eliminations on the same night as the performances. It’s a bummer for the viewers as well as the dancers. They don’t have any time to enjoy the high that comes from a job well done. On Monday’s show for example, Elizabeth and Val had literally performed a few minutes before the elimination at the end of the show, and were still glowing from receiving a perfect score, when they were announced as being “in jeopardy.” Even though that was shocking to them, (as it was to the rest of us,) they still couldn’t wipe the smiles off their faces. They had to sober-up in a hurry when they heard the shocking news that they were eliminated. It’s not fair to do to participants and viewers alike to put them through that. On what’s supposed to be a fun, lighthearted show, it’s just cruel to make people, no matter how successful they might be in their careers, go from the highest high to the latest low in the space of a few minutes! It takes the joy out of it for the viewers, as well.

I know it’s not the show’s fault that they have to do the eliminations on the same night, but rather a decision made by the ABC brass. They need to re-evaluate for next season because they really need to reinstate a separate results show. I bet if they told the celebrities that they wouldn’t get paid more for being on TV two nights in a row, but they wouldn’t have to be eliminated the same night as they dance, they would all agree to that deal. I know I would. I’d want one night of relief and fun partying before having to go home, or have one of my compadres do so.

Last thought on this show: whoever you are, please stop voting for creepy, full-of-himself, no-talent Bill Engvall!!! After he was shockingly not eliminated on this week’s show, instead of being gracious, and admitting that he’s the one who should have gone home, this is what he said on the local news: “By God, we do deserve to be here!” Obnoxious enough for you?

And he’s supposed to be a comedian, and he’s not even funny! Ugh.

Is this the worst competition show ever, or what??? The first two seasons were bad enough, but this one is downright pitiful. Right now, we’re down to the Top 13, (don’t even get me started on adding an extra person to the mix, which I’m sure was because they felt they hadn’t met their ethnic quota,) and there are maybe four who can actually sing. It’s really hard to watch. If they think these are the thirteen most talented singers in the country, they’re insane.

I’ve already wasted enough of my time watching this season, I don’t want to spend much more on ranting against it, so I’ll be brief. 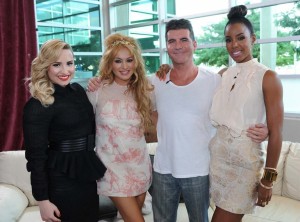 This season’s X Factor judges. They’ll be gone before you know it, so why waste my time naming them?

My quick review is that a panel of Simon Cowell and three females doesn’t work at all. And these are the three music experts he chooses to go up against ? Though I think she’s kind-of cute and fun, Demi Lovato is too young, and a recovering drug addict, Kelly Rowland just got famous because she backed Beyoncé, and we don’t even know who Paulina Rubio is! And that last one barely speaks English!

The format is bad, the contestants the worst, and there’s not even anything fun about the judging panel, like there is on The Voice. (And there used to be on American Idol.)

But last week was perhaps their lowest point. The audience finally got the chance to vote, and then at the beginning of the results show, host Mario Lopez announced that there had been some technical glitch in the voting, and that they had to scrap those results. To fill the hour allotted to them to announce the results and send someone home, they had each contestant sing a different song than they did the night before, and the viewers got to vote anew. But I don’t buy that explanation for one second.

Here’s what I think happened with that scenario, which I’m sure was for publicity, but there were other factors involved, too:

The producers realized that it wasn’t fair to make the contestants be judged on their performances of Motown songs, (which they were all forced to do on the competition night, even though it didn’t fit many of their styles,) so they invented the malfunction ruse so the competitors could be showcased in their own genres. It actually was more fair to the contestants, even though I assume they were just trying to show the two viewers they have left that these people are better than they were on the first voting night, which often veered to downright brutal.

One of my clues to my premise that the “malfunction” was planned is that at the end of the competition show, Mario Lopez threw in a sentence like, “Remember to check the phone numbers on-line.” He’s never said anything like that before, so it seems like they were setting-up the excuse that the wrong numbers were given out. (I seriously have always wanted to be a detective, so I love deciphering clues like that.)

Another clue is that there’s a manufactured* group of three young girls competing, who never did a harmony in their lives, and all of a sudden, they whipped one up in a few hours for their emergency song! Yeah, right, they worked out group harmonies in one day. It’s just not possible, in this particular case. (*Simon took three girls who never met, and put them together as a trio, which he’s done to success before. I actually think that’s the whole reason he does this show; he owns them when he does that. He has two like that on the show this season.)

And the X Factor powers-that-be expect us to believe that these contestants just found-out about the glitch at about 9AM, and performed a new song live at 5PM! Individual acts might have an extra number prepared, but not the two manufactured groups. And what about all the rehearsals with the vocal coaches and the stage presence coaches and the lighting and the wardrobe and the camera and all that? Pros might be able to work in a “let’s put on a show” type of situation, but these green performers would not be capable of that, especially en masse. (And we’re expected to believe that they did all that for thirteen acts in under eight hours. Like I said, yeah, right.)

My last clue to the deception is that the judges weren’t even wearing results show attire! Kelly Rowland looked like she just rolled out of bed! I think they were trying to show that they had worked so hard with the contestants that they had no time to get dressed, but I cry baloney, especially because Simon, for the first time ever, was the only one semi-nattily attired!

The supposed controversy gave them some much-needed publicity, and I’m sure their plan to get more people tuning in that night worked.

If you’re a fan of the show, which I can’t even imagine, you better finish watching this season because I don’t see it ever returning to American television.

Not much to say about this one. It’s really pretty good. Mr. X and I don’t agree of the attraction of some of the contestants, (like Kat Robichaud and Matthew Schuler,) but the show has overall superior talent to all the rest of them. 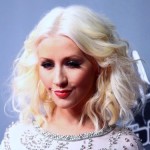 Even though no one from the four previous seasons has really become famous, (which just goes to show how hard the music business is, even with a fabulous forum like this, and music biz celebrities backing you,) at least they pick people who can sing. And singing is the point here, isn’t it?

The judges up all pretty entertaining, and even though Carson Daly is about as interesting as sand, I love that he keeps it moving and never makes it about him, as so many of these competition show hosts do. (I’m looking at you, Ryan Seacrest.)

So, that’s it for The Voice. I think Tessanne Chin will win, and she deserves to.

Best of all this season, is seeing that Christina Aguilera lost so much weight, which proves my point that people look better thinner. I hope that gives me the push to get back to my former skinny self, as well, as soon as my hands heal. And maybe the weight loss will even make me be able to sing!