In case you missed it, I did a guest spot on a Sports Radio show last week-end to explain why Aaron Rodgers was the absolute worst guest host on Jeopardy. As I enlightened the radio gents, who seemed to get a kick out of my observations, I realized that I had never let my readers in on them! So now that Mr. X and I have finally gotten caught-up on months of Jeopardy, I figured this is the perfect time to share my thoughts with you all, as well.

We’ve watched up to four episodes a day for the past month or so! So I can honestly say that we’ve had an intense, very full experience of all the guest hosts, and they’re fresh in my mind as I write this. 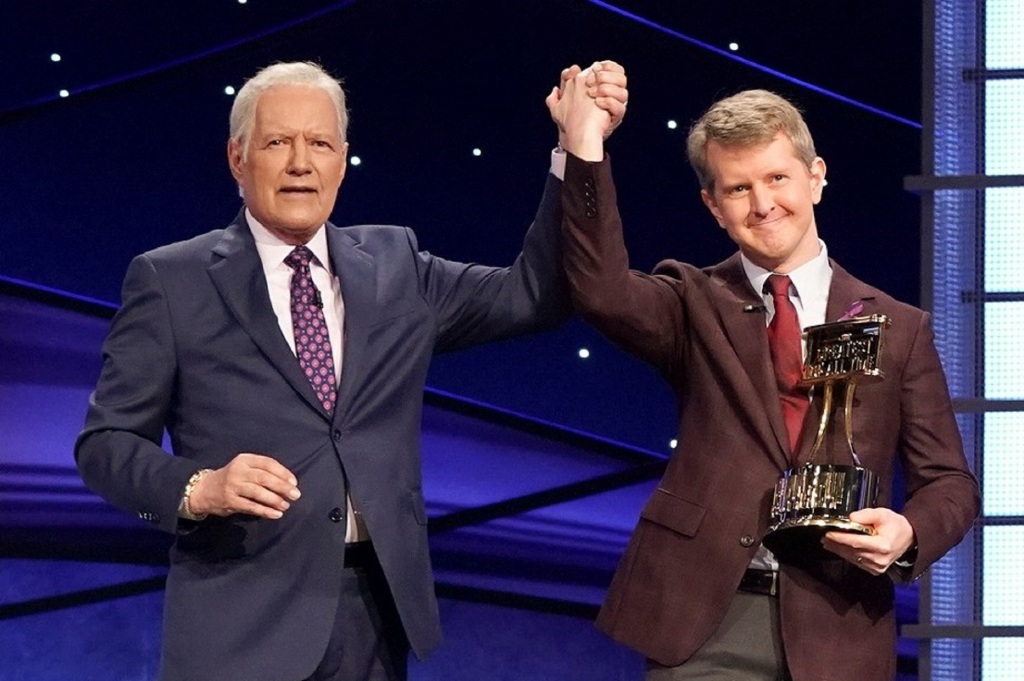 I hope this picture of Alex Trebek presenting a victorious Ken Jennings is a portent of things to come.

And let me tell you, this whole Jeopardy experiment just proves how hard the position of Game Show Host is! Especially on a program that highlights brains! And has little banter. There’s no stopping the game to have a laugh or two along the way.

Here’s one main thought that I haven’t seen anyone else say, anywhere: I don’t think these two-week stints are auditions for the permanent job, per se. We know they’re not going to choose anyone over sixty-five; they’re looking for longevity in a host. And some of the guests are just novelty items. I feel that the producers are just trying to bridge the pain of Alex Trebek’s death to acceptance of a new face in his place. And these are probably the best ratings they’ve had in quite awhile because everyone wants to see these mainly-celebs make fools of themselves. (Or triumph. But searching for fools is most likely more of an impetus to tune in.) Also, as Mr. X says about people being astonished by his krump dancing abilities, it’s not how well the dog sings, it’s that he sings at all!!! 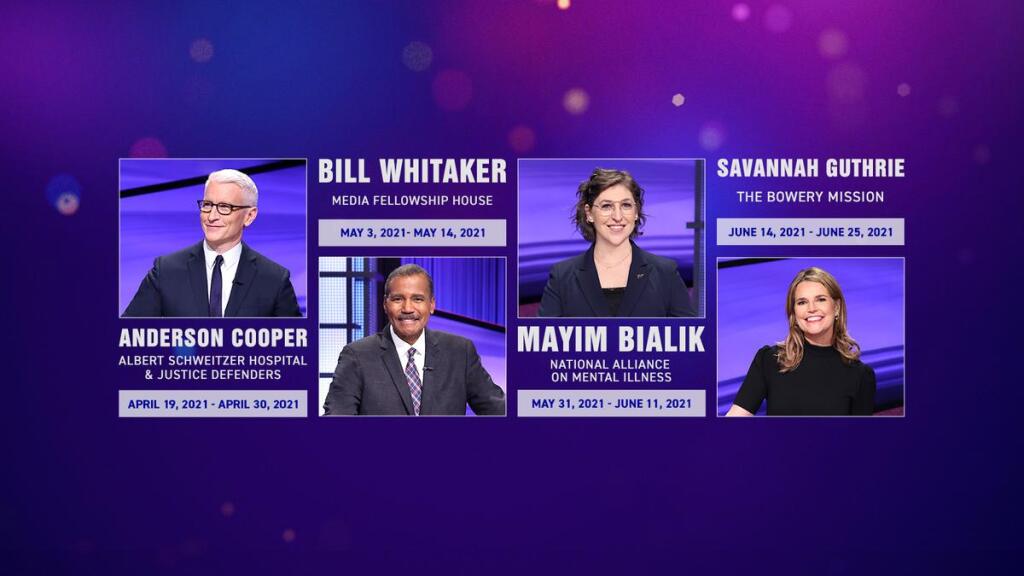 Some of the Jeopardy guest hosts this season.

Before I analyze the job that each guest host has done to date, I have to tell you of my personal game show experiences, from all aspects, to give you some extra insight into my insights.

I was actually tricked into my very first appearance. I was a young fledgling actress, and my agent sent me on an audition for “attractive personalities” that I was told was for a new talk show. The producers had me tell them the story of my being in the circus, and of my budding acting/dancing career I had left behind in New York, and…I got the gig! I didn’t even know it was a game show until…I was on it!!! It’s all a blur now, (and it was even back then,) but I did win my very first vacuum cleaner! So it turned-out to be somewhat worthwhile, even though far from what I was expecting.

The next time I was on a game show was as a celebrity contestant, and boy, what a difference that qualifier makes! I had hair and make-up peeps, and the dressing room I was given was…Cher’s!!! OMG! They paid us an appearance fee, of course, but the money we won was for our cheering sections in the audience, which made it even more fun. [Note: That “celebrity” status was because of Mr. X’s work, not my own.]

My looks went basically from this… 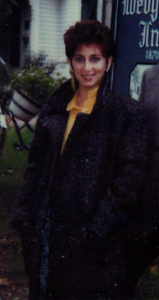 ..to this overnight, because of my accidental haircut! (And it was actually even shorter than this at first!)

Then, when I was doing my television series, Karen’s Restaurant Revue, I got chosen to be a celeb panelist on a few game show pilots. I was the only female on all of those, and paired with the likes of Arsenio Hall and George Wallace. It was heady stuff. None of the shows were picked-up, with one of those rejections being blamed by the producers on my drastic short hair cut the day before we presented to the network! (I actually agree with them.)

My last personal foray into the world of game shows was as the host of a pilot, which got pretty far up the network ladder. There was also an equal male host and we were each in charge of one competing family. When we did our final major presentation to the network bigwigs, my co-host made a shambles of it, but, as Warren Littlefield told many people, I saved the day! (I actually heard him say it myself as he was leaving the area; I was in the lobby with my back to the execs.) Warren told my agent that I was the only good thing about that whole experience! He added that I should have my own hosting gig, but that no one in the biz would hire a female for that job. (He was talking about at that point, of course, but it is still usually the case today. I get it, though—male voices are just more appropriate for that career. Except for Jane Lynch—she’s fabulous on The Weakest Link!)

Okay, so now that we’ve sufficiently harked back, let’s get to my opinions of the first seven Jeopardy guest hosts they’ve had so far, in order from first to worst: 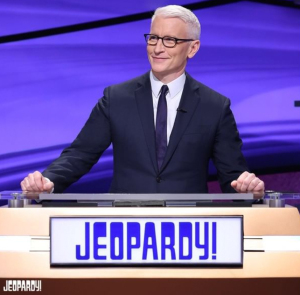 Anderson Cooper, looking like a natural at the Jeopardy podium!

The Absolute Best—Anderson Cooper: When I finally saw Anderson Cooper’s first Jeopardy, I tweeted, “Mike drop!,” adding, “They need to sign him up indefinitely right this minute!” He speaks soooo well, his pronunciations are impeccable, his voice is clear and distinct, and he’s as wonderful and engaged with the contestants as I knew he would be. (And, if one of them says something amusing, we don’t have to wait until New Year’s Eve to hear his world-famous giggle!) Not to mention—he’s a two-time Champion of Celebrity Jeopardy! So he’s a smart one. And for you people who may not understand how ratings work, Anderson’s were a tad low because three of his episodes were moved to the middle of the night because of Joe Biden’s speech and the NFL Draft! (Yes, it could also be because there are idiots out there who are prejudiced against gay people, but those viewers are too stupid to watch Jeopardy on a regular basis, anyway!) 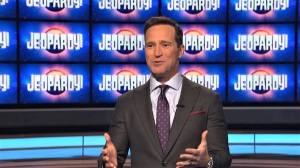 Second Best—Mike Richards: I was shocked at how good the Executive Producer of this show was at hosting! When I saw a stranger on there, I was pretty disgruntled. Until he began reading the “answers,” that is. He speaks very well, has a powerful voice, and handled the contestant chat perfectly. It turns-out, Mike has hosted a couple of much lesser offerings in the past, so he does know how to do it. I wouldn’t mind if he gave himself the job permanently! (And he’s the right age for it, too—forty-five—if they want someone to be the host for another thirty-seven seasons, as Alex Trebek did!) 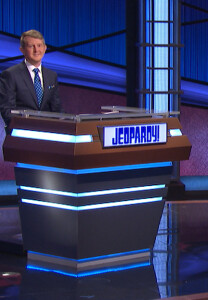 Third Best—Ken Jennings: Ken is perfect for the gig, in every way, but one. That is his semi-annoying lisp. (But I think he’s been working on it a bit; it wasn’t as noticeable during his two weeks as it usually has been through the years.) The biggest advantage of Ken hosting is that he seriously knows just about all the answers himself! (I hate to speak ill of the deceased, but that was my biggest quibble with Alex Trebek—he always acted like he’s the one who wrote all the questions!) The second I saw that Ken had been hired as the “Consulting Producer” when Alex was still alive, I figured that meant he would become host upon Alex’s exit, for whatever reason. So it was no surprise that he was the first guest host. I’d be fine with him getting the job permanently. And he probably should, since he’s already indelibly linked with Jeopardy in perpetuity!

Fourth Best—Dr. Oz: In the middle is Dr. Mehmet Oz. Outside of his weird New York accent,(it’s weird because he’s from Ohio!,) and not great looks, he, shockingly, actually grew on Mr. X and me over his two weeks there. I’m far from a fan of his, in general, so I was a tad against him from the start. But his enthusiastic delivery got to us, in a good way. 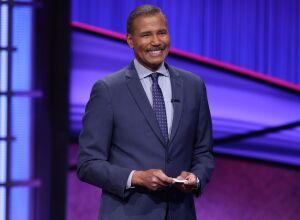 Third From Last–Bill Whitaker: I was surprised to see he wasn’t as awful as everyone had declared him to be. Yes, I’m not a fan of his thin, weak voice, but I actually found that it didn’t get in the way of the game. He was incredibly nice to all the contestants, never making their interviews about himself, (as some others have been wont to do,) and he seemed genuinely in awe of their smarts. I’m shocked to say I could actually live with him getting the gig, but, at almost seventy years of age, he has the least chance of everyone. 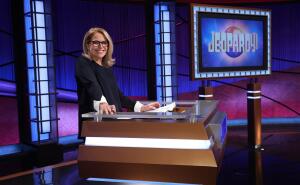 Next To Worst—Katie Couric: We thought Katie was awful!!! She was so annoying, and acted like it was a morning show, not a game show. She had to stop and comment on everything, like loving one contestant’s good luck “shimmy,” which it was not her place to do. She even kicked her leg out behind herself, like a flirty girl, while reading one Final Jeopardy question! Weird. Plus, her delivery is sort-of robotic.

The Absolute Worst—Aaron Rodgers: He was soooooo dreadful that he was actually upsetting me! I know there are more guest hosts to come, but I can’t imagine anyone being worse. Aaron was the epitome of boring, has a horrible voice, reads like a first grader, has zero interest in the contestants’ stories with nothing clever or kind to add, and he even mispronounced “Borden!!!” The only good thing about his episodes is that I can use them when I need to fall asleep! That guy is a snoozefest and a half! Shockingly, before I saw him on there myself, I had been hearing how great he was. Now I’m wondering what those people were watching. He seemed like he was doing an SNL game show skit! (Okay, there is one positive here: Every time I type his name, I think of Keegan-Michael Key’s “A-aron” skit, and laugh a bit. So I guess I am a “glass half full” kind-of gal, after all!) 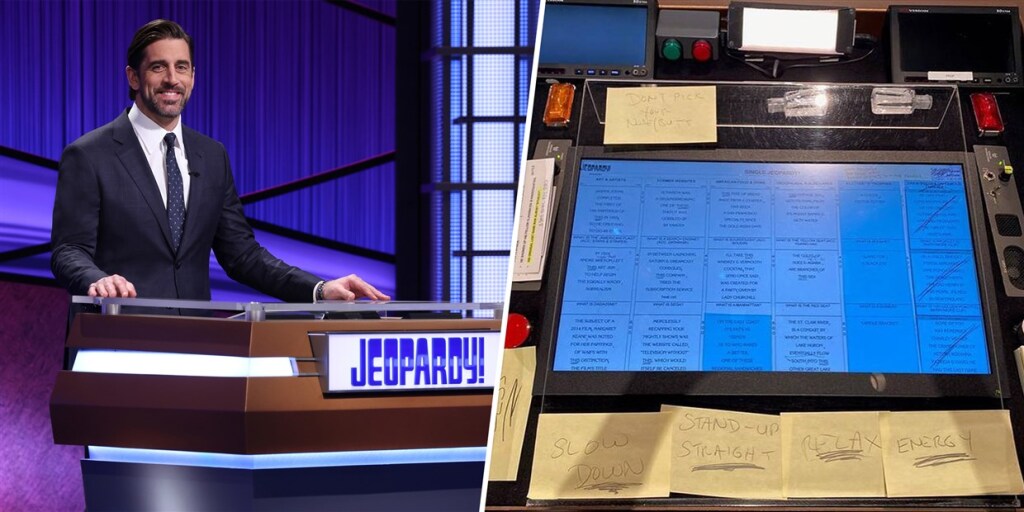 Aaron Rodgers’ Jeopardy podium, featuring sticky notes to himself. One of them should have read, “Get a personality!!!”

And the list will go on. And on! It’s getting crazy. As I alluded to at the beginning of this article, I honestly think the powers-that-be at Jeopardy Productions are doing this more for ratings than as a search for a host. They either need an established game show host or a new-ish one, so that he, too, can last for another thirty-or-so years. Hiring a celebrity is definitely not the way to go!

In case you’re interested, here’s the list of the upcoming sort-of celeb ones, in order, through the middle of August: former contestant Buzzy Cohen, (for this season’s Tournament of Champions,) Mayam Bialik, Savannah Guthrie, doctor Sanjay Gupta, George Stephanopoulos, Robin Roberts, Lavar Burton, David Faber, (whoever he is,) and sportscaster Joe Buck, who has a good voice, but is as annoying as heck!

And there you have it. There are a few really smart people on there, (Mayam, Buzzy, Sanjay, George,) but I venture a guess there’s nary a host winner in the bunch. Maybe one of them will prove me wrong as we go along. But they need to just hire Anderson Cooper or Ken Jennings, and let us serious Jeopardy watchers get on with it already.