Trending
You are at:Home»KAREN'S RANTS»TELEVISION/KAREN’S RANTS: HELP ME HELP SEAN (HAYES) SAVE THE WORLD
By Karen Salkin on November 5, 2013 · KAREN'S RANTS, TELEVISION

HELP ME HELP SEAN (HAYES) SAVE THE WORLD

During my now almost four-months-long ordeal with my hands, (everything in my life recently seems to be tied into that, doesn’t it?,) the main thing that helped me through has been humor. Thank goodness for me that Mr. X is the funniest person on earth because laughing with him has been the only bright spot through this whole summer and fall.

I’ve always felt that the saying “laughter is the best medicine” is totally true. I do know that actual medicine may really be better, but when you’re laughing, the pain seems to move to the back burner for those few minutes.

But, of course, Mr. X can’t entertain me twenty-four hours a day, (though he does so most of those hours,) so that’s where TV sitcoms come in. I’m grateful that my three perennial favorites are still on, (Modern Family, The Big Bang Theory, and Two and a Half Men,) but, unfortunately for me, most of the new crop has been pretty bad. In order to review them for you, I forced myself to sit through the first two episodes of most of them, and much of it is time that I truly wasted. There is only one winner this entire season, and now I’m afraid that it’s in danger of being canceled. 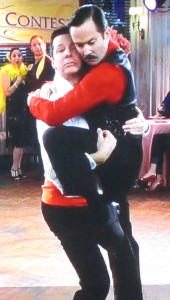 Sean Saves The World is the funniest show to come along in years. But the pilot was so bad that I fear that most people just gave up on it right away, (as I would have done, had I not wanted to review it fairly.) NBC should’ve never even aired that one; they should have spent the money to re-do it, to come up to the quality of the ones that have followed.

And let me tell you that I saw maybe one episode of his previous series, Will and Grace, and thought it was dreadful, so it’s not like I’m some crazy Sean Hayes. I don’t recall if I’ve ever even seen him in anything outside of the movie drama Pieces of April! I knew that he was considered very entertaining, but I had never witnessed it myself; in the little bit I did see of his old sitcom, I actually thought he was overdoing it quite a bit.

But Sean Saves The World is great! (Outside of that stupid title, of course. Maybe that’s what’s doing it in!) I’m so glad I gave it that second chance it deserved from me, and from all of us comedy fans, actually. Sean himself has gotten much funnier since the pilot, and the rest of the cast has fallen into place.

But the real star is Thomas Lennon, the little guy who plays his boss. That guy is a riot!!! Mr. X and I have to replay his bits because we’re laughing so hard that we’re missing half of what he’s saying. And yes, if this show gets canceled, (bite my tongue!,) he would hopefully get into another series really soon. But it’s his character on this one that I really want to continue seeing.

Despite the title of this column, I’m not really one who knows how to save television shows, but I have faith that a lot of you have that know-how. So, if you can tell me, and the rest of my readers, how to help me help Sean save the world, please share that knowledge with us in the comments section below. [Note: It’s fixed now, but I’ll give you more deets on that situation next week.]

And if you’re a fellow lover of the show, please spread the word to save Sean Saves The World. I’m sure I’m not the only one who desperately needs those laughs right now!