Trending
You are at:Home»KAREN'S RANTS»TELEVISION/KAREN’S RANTS: DANCING WITH THE STARS—SEASON 17
By Karen Salkin on September 24, 2013 · KAREN'S RANTS, TELEVISION

Just as three of my favorite competition shows have ended, (if you missed what I’m talking about, you can see yesterday’s wrap-up of them here: itsnotaboutme.tv/news/television-summer-2013-competition-shows-wrap-up,) the granddaddy of them all begins anew.

Yes, that’s right–Dancing With The Stars is back for yet another season. The seventeenth, to be exact. This one actually has my head spinning in so many directions; I need to share some of those thoughts with you right here.

Let’s begin with the negatives, of which there are many. (In reading this back, I realized it’s pretty much all negatives! I think the only positive is that the cast is pretty interesting this season.)

I hate the new format!!! Every single aspect of it. 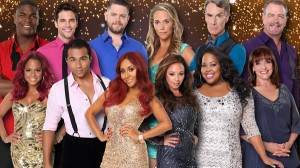 First of all, there’s no results show! I know they copied that horrible idea from Fox’s So You Think You Can Dance, but it sucks there, too. What better show does ABC have on in its place??? I thought Dancing With The Stars was their most successful show! As with the Fox show, if the network feels it can’t spare an hour for the results, why not just a half hour? Obviously, everyone who watches the show is a fan of dance somehow, and by cutting out the results show, they are also cutting out the segments where we get to see all kinds of professional dancers go to town. Dancers are always the most talented, yet underemployed, performers, so the shows that live off the concept of dance should not be so rotten as to cut out work that many of these performers counted on each season. It’s very disturbing.

So, Dancing With The Stars is basically telling its audience to tune in to see people who can’t dance try to do so, but let’s not ever highlight people who know how to dance, and are supremely talented at it, most of whom struggle financially just to stay in the field. Yep, that sounds right, doesn’t it?

Okay, now I’m riled up, and ready to rail against the rest of the stupid changes on the show this season.

Why on earth would they change the side of the stage that the judges set on? What does it matter to them? It’s really no big deal, but it’s just annoying, and not necessary. One of the reasons that people watch this show to begin with is that they are comfortable with the formula that’s been working for all the seasons. If they needed to make any changes at all, it should be to replace inane judges, Carrie Ann Inaba and Bruno Tonioli, with actual ballroom dancers/judges. It’s so annoying to have people who’ve never performed in the field judging others on their abilities to do so. Or not. I’m so happy that Julianne Hough will be a judge for a couple of weeks this season, but unfortunately, she’s replacing Len Goodman for those weeks, and he’s the only judge of the regular three who knows what he’s talking about in the category of ballroom dance!

Another horrible new change is that they make all the competitors sit in the audience for the duration of the show! What genius came up with that idea?! Outside of wanting to see what the others are doing up-close and personal, it must be torture. It appeared to me that what the competitors of seasons past loved the most was the camaraderie in the backstage area or in that stupid upstairs lounge they had for several seasons. Now these people have to sit there through almost the entire two hours, except when they are about to go on. And they’ve even had people get up from that spot in the audience and perform cold turkey! It’s ridiculous. What if they want to rehearse, go to the bathroom, make a call, etc.? I’m sure they’re allowed to get up for a bit, but it seems like they want everybody sitting there together for the duration. Last night, as a matter of fact, after Val and Elizabeth had performed, and Val was dripping with sweat, they had to go over and hug everybody right then, and then sit down. How about letting them go back and towel off first, at least? (I think this series needs me as their show runner, don’t you?)

One last reason that they shouldn’t have the competitors this season sitting out in the front row of the audience, watching their “rivals” perform: their faces show exactly what they are thinking. For example, on last night’s show, the lot of them were totally scoffing at Corbin after his dance. I’m sure they didn’t want to be caught on camera doing that, and looking like bad sports.

And I don’t like the contestants facing the judges for their scores, either. It’s just uncomfortable.

Several times throughout the first two shows of the season, the competitors are made to chat-up co-host Brooke Burke right before they go on. Ugh.

There are way too many professional dancers in the competition this time. The following people are, or have been, real professional dancers, (meaning they have made a living at it.): Amber, Corbin, Valerie, Elizabeth, Christina. That’s five out of twelve! Not fair. They need to have themed seasons; either all over 50s, under 50s, athletes, talk show hosts, people who’ve never danced in their lives, people who’ve been pros at it just not at ballroom dance, etc. It’s so unfair the way they do it now.

The judges were so rude to Bill Nye! He danced kind-of like Andy Dick from last season, whose butt they continually kissed, only Bill is better, more charming, and definitely more fun to watch. There was no need for the judges to treat him like that on show Number One, especially when they lauded everyone else so much, most of whom didn’t deserve such high praise.

The only real good part of this season is to see Valerie Harper be on the show. I thrilled that she’s doing well enough health-wise to be able to do this gig. And she’s someone I actually know a lot, so that makes it even more special. (If you missed my tribute to Valerie in March, when we all first learned of her horrible cancer diagnosis, you can read it here: itsnotaboutme.tv/news/living-tribute-valerie-harpers-sad-news.)

Those were my main thoughts while I watched Week One. Here are some new observances from last night’s Week Two show:

Christina Milian’s roots need to be done, pronto! I actually thought the red part was a wig that wasn’t sitting right on the brown roots! They usually have pretty good hair and make-up people on this show, so why aren’t they fixing that mess?!

Again, I took note that there are too many pros among the competitors. As much as I love seeing good dancing, I’m a fan of fairness even more.

I noticed this lack last week, but I decided to give them the benefit of the doubt and assume they’d fix it by the second week, but they are just not making the new rules clear. Since there is no more results show on the second night, how do they arrive at each duo’s totals? We know they factor in the audience vote from the first week, but do they combine both weeks judges’ scores??? Or just the judges’ scores from the previous week that the audience voted on, too? I think I can speak for the entire viewership when I say, I’m so confused.

And while we’re on that topic, why did host Tom Bergeron never tell us what was happening with the new way they’re doing the results? I found-out how they would be doing it this season by accident, but people like Mr. X, who just watch when it’s on and don’t do research on it, still have no idea what’s going on.

And, as I’ve written before, about the lack of results show on SYTYCD the past two summers, it’s terrible to eliminate someone on the same night as the performance show. It’s just cruel. The competitors, who’ve put their blood, sweat, and tears into each performance, never have one night where they can just rejoice in their accomplishments. It’s barbaric, which seems to be what’s “in” nowadays.

Spoiler Alert: For once, the results were fair because Keyshawn Johnson was really the worst one. Seriously, much worse than Bill Nye, even though the judges didn’t mark accordingly. He was actually almost as bad as former contestant Master P, who was the worst ever. [Sidebar: Does anyone else think that Keyshawn got old in a hurry? I remember hanging out at his hip restaurant on Robertson just about a decade ago, and thinking he was a really young guy.]

But I was glad to see how classy Keyshawn was in defeat. That took the sting out of it a bit for us viewers.

But it was still a horrible way to do the ending. The eliminated duo doesn’t even get to have their “last dance,” or have all the other contestants rally around them with hugs and kisses. It’s just horrible. I don’t know what they are going to do when it’s a contestant who’s crying his or her guts out, and needs to be consoled. Actually, that’s probably what the idiot powers-that-be are hoping for! Barbarians. 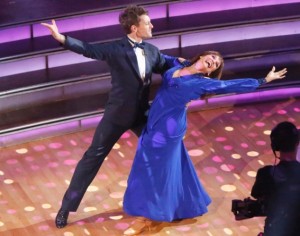 I just have to laud my old pal Valerie Harper again before I close this review of the show. I promise you that what you see with Valerie is absolutely how she is in person. She’s lovely and honest and kind. I would hope that viewers would be rooting for her even if she didn’t have a devastating illness. And she can still dance!

And how fabulous of a person is her partner Tristan MacManus? What a man. I love that he stood back from her at the end of their first dance, to let her get her own applause. I can’t imagine there are many, especially a young ‘un, who would think to do that. And last night, I was crying watching Tristan get genuinely choked-up watching Valerie rehearse her solo section. Now I love him more than ever. What a lovely guy. I’m so thrilled for her that he’s her partner. So I do have to give the producers a prop or two for that pairing.

To end this column on a totally happy, positive note, major Congrats to the fabulous Derek Hough for winning an Emmy for his choreography on this very show. He’s one of the nicest people I’ve ever met, (both in and out of show business,) and he’s an absolute genius choreographer, to boot. You go, boy! You reminded me why I watch the show to begin with; to see truly talented people like you!