Trending
You are at:Home»TELEVISION»TELEVISION/KAREN'S RANTS: DANCING WITH THE STARS PHONE-IN LINES PROBLEM
By Karen Salkin on April 26, 2011 · TELEVISION

I’ve been meaning to call everyone’s attention to this problem with the Dancing With The Stars call-in system all season, but another topic for the day’s column always came up. It pissed me off even more last night, so I just had to make the space to tell you about it.

The whole system is stupid to begin with–they let you vote during the show! That means you can vote without having seen everyone perform, which is so not fair. Then, if you actually care about fair, like I do, you have only one half hour to vote after the show ends. Which means, you can’t get behind in the watching of it, as everyone with a DVR does, so they can cut-out commercials.

Also, the contestants keep their same phone number all season long, so you don’t even have to watch the show to vote! You just dial their number on Monday night anytime the show is on, from wherever you might be. So incredibly unfair. And stupid.

But what’s happening this season is the worst ever; when you call in, more often than not, you get a message saying that your time zone has closed. When it hasn’t! If you’re just an accepting person, or not caring, not paying attention, or not too bright, you’ll assume that’s the truth and just stop trying to get through, even if your favorite needs your votes.

This is what we’ve been finding this season: if we call the numbers twenty times, let’s say, at least ten of them will have the message saying our time zone has closed, when it clearly hasn’t. Mr. X even helps me vote, because I’ve impressed upon him that he can’t get upset if a deserving dancer gets eliminated if he did nothing to help them, and when he first came up against the problem, he would have just believed the erroneous message and given up if I hadn’t told him to ignore it and keep dialing.

We also often get the message that says that we’ve reached our “call-in limit.” (Each week, the viewers get to vote only the number of times as the number of contestants. For example, if there are seven dancers left, we get seven votes per phone line. Therefore, the “call-in limit” message should kick-in after seven that week.) But it often just comes on whenever it darn well pleases. If we plug on, we find out it, too, is erroneous. 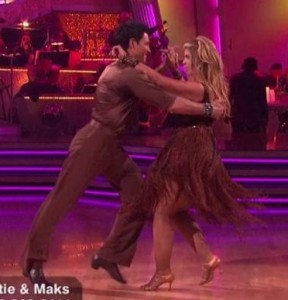 And while I’m on the topic of the show, I wish the judges would stop lauding so-so performances already!!! It’s a little okay to do that in the first couple of weeks, to not hurt the feelings of the so-called celebs, but now it’s just downright weird. Kirstie Alley is rarely good, and her bad samba last night was just ballroom dancing 101. Yet, she got two nines! (Out of ten, for those of you who don’t watch.) They’re just either being kind because she’s old or the producers know she’s a train wreck and they want her around for the duration. The marks are always a tad iffy, but they seem to be getting worse.

Okay, I’m getting off topic of their phone problem. So, I’m just really writing this to let you know that if you really want to vote for someone, you should ignore the incorrect messages and keep voting if you know that your time zone is active and you haven’t dialed the maximum number of votes. And don’t even get me started on the crazy unlimited-votes policy of American Idol!