Mr. X and I are so disturbed by last night’s American Idol results! How dare the judges let the best singer on there, Curtis Finch, Jr., go home!!!

Yes, he was the lowest vote getter, which was a shock to begin with, but I think that was because a) he had the bad luck to go first the night before, and b) all the voters probably thought that for sure he’d be safe, so they voted for others. (I’m sure it didn’t help that, because of terrible advice from Jimmy Iovine, Curtis gave his least good performance to date on Wednesday’s competition show.)

But the judges could have saved him. And definitely should have! I know they always reserve their one “save” of the season for further down the road, but who will be more worthy of it than Curtis??? No one! No…one. 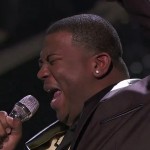 I’m so sad to say this, but we’re pretty sure it was Keith Urban, our former favorite judge, who put the kabosh on saving Curtis. It shouldn’t have to be unanimous to begin with; it should be a majority, which means three to one, which it was in this case. Nicki Minaj came right out and said she voted to keep him. And Mariah said that, for her, the season to this point had been about only Curtis. When Nicki said they hadn’t had enough discussion, Randy looked over at Keith and asked him something, and Keith just threw up his hands like he was still saying no. So, I think Randy asked him to change his mind, which means that Randy was on Curtis’ side, too.

And this stupid decision makes the whole “singing for your life” bit bogus! No one on that show could have sung better than Curtis Finch singing I Can Fly to get the save. When he sang it on an earlier show, the judges went nuts. And he sang it even better last night. And Keith Urban let him go home?! Disgusting. Absolutely revolting behavior. [Note: And the term they use, “singing for your life,” is just offensive. It’s not for their lives, for goodness sake! I’m sure there are countries where people have to do something crazy to save their lives, but singing on a stupid TV show in America is not it!!!]

I haven’t been this upset since Adam Lambert lost in the final to Kris Allen. (Anybody remember the latter guy?) I know that in yesterday’s column I said that there was no one in this group I really wanted to hear, which I still stand by. But I also said that Curtis was one of the four good ones and listed him first because he’s the best one on that show. And all season, I told everyone that he’s already the winner, hands down. There’s not one other person on this show who comes close to him. (I thought it would come down to Curtis and Devin as the final two. But last night, they were shockingly the bottom two! Go figure.)

And what kind of screwed-up advice did Jimmy Iovine give him this week? He told him to not do gospel or old school R&B anymore. Good one, Jimmy. You should be drummed out of show biz for that move!

And one more word about the voters—are they insane??? The sweaty stutterer Lazaro and insipid Paul Jolley were safe, but not great singers and performers Curtis or Devin??? Mr. X said the voters are all going to hell, and I agree.

Mr. X is even more upset than I. I think he really won’t watch the show ever again. Once he closes the iron door on someone or something, there’s no coming back from that.

So, now we’re mad. And even though this is further proof that American Idol is a load of crap this season, (the ratings are attesting to that,) I have to beg everyone to make things right somehow. We can’t bring Curtis back, (or can we—isn’t there always a stupid twist on this show?,) but we need to all vote for only Devin or Kree. No one else deserves to be there!

I have a feeling, though, that if Mariah or Nicki ever go on tour again, they’ll have Curtis open for them. Fingers crossed that I’m correct. At the very least, I think he’ll have a successful, if not lower-key that it would have been had he gone further on Idol, career in gospel.

Wait a second—I just realized something I read yesterday about that Curtis had stolen a laptop from a church back in the day, and people thought that the producers were going to try to get rid of him! Maybe they fixed it this way! OMG! I don’t trust the powers-that-be on any of these shows anymore.

Last thing: I complained about the results to a pal of mine who’s in the know about these things. And he told me that’s it’s “just a TV show.” That made me laugh in the midst of my being all riled-up, which I really needed. But being the Empath that I am, I feel everyone’s pain, especially if it shouldn’t be. And I always want everything in life in life to be fair, and Curtis being first voted off, and then not being saved by the judges, is..just…not…fair. At all. And, it may be just a TV show to the rest of the world, but to the competitors, it’s a crack at having a good career, which most of them don’t deserve. I’m just explaining in case you think I shouldn’t get this upset either. Okay, I have to go try to lower my blood pressure now!