Let’s get this straight right away—Chuck Lorre’s vanity card from last week is a friggin’ riot!!! And anyone who doesn’t get that, is really lacking in many categories, especially intelligence and humor. (Yeah, I’m talking to you, TMZ!)

For those of you who don’t know anything about this at all, Chuck Lorre is a major producer of several CBS sitcoms, most notably Big Bang Theory, Two and a Half Men, and Mike and Molly. For years, at the end of his shows, where a vanity card* would go, he writes something that’s usually very entertaining. Sometimes they miss, but it’s like a little goodie bag for watching the show. [*Note: a vanity card is basically the studio’s logo at the end of the show. They often make them cute, personal, or somewhat comedic nowadays. But nobody else goes to the lengths that Chuck Lorre does.]

When Mr. X and I first discovered them, we laughed all the time. But then, in the past year or so, not all of them tickled our funny bones. They were nothing bad; they just didn’t get to us like they used to. 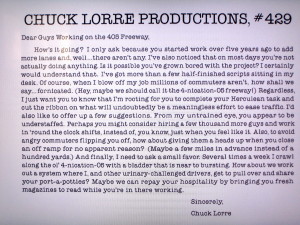 The vanity card itself. Please take note of the proper letter form used.

And then, on this past Thursday night, we started reading the one that came on after Big Bang. (The same one is on all his shows in the same week.) We both started laughing immediately, and got hysterical as we read on. I know that I, for one, read it at least three times because it was one of the most hilarious things I’ve ever read in my life. (And boy, did I need that great laugh right then, because my left hand has had another setback after the surgery.)

We were all set to watch more TV that night, but that vanity card left us on such a high note, that we just shut it and got into bed with huge smiles on our faces. (And isn’t that really the best way to fall asleep?)

So, I woke-up Friday morning to a bunch of idiots on other sites (including the esteemed Los Angeles Times!,) having their panties in a bunch over what they’re saying was such an offensive writing! I still can’t get over their idiocy! I decided to just not pay any more attention to the topic, and got up and started working. But then Mr. X later came into the room I was in, all upset about something, carrying his laptop with someone talking on it. It turns out, he was watching the morons on TMZ talking about how horrible Chuck Lorre was to have written that card, and taking the whole thing completely seriously.

These vanity card writings are known items in the comedy world! I don’t see how there is anyone in show business, or out of it for that matter, who could watch one of Chuck Lorre’s sitcoms, and think that this is a real complaint he’s making! Of course, the complaint itself is real; everyone in Los Angles makes it on a regular basis. But the writing of it is just hysterical comedy writing, and anybody who would take it as anything else has got to check his or herself. (Into a mental hospital, perhaps.)

Okay, this is what the card said, and you be the judge:

Dear Guys Working on the 405 Freeway,

How’s it going? I only ask because you started work over five years ago to add more lanes and, well… there aren’t any. I’ve also noticed that on most days you’re not actually doing anything. Is it possible you’ve grown bored with the project? From my untrained eye, you appear to be understaffed. Perhaps you might consider hiring a few thousand more guys and work in ’round the clock shifts, instead of, you know, just when you feel like it. Also, to avoid angry commuters flipping you off, how about giving them a heads up when you close an off ramp for no apparent reason? (Maybe a few miles in advance instead of a hundred yards.) And finally, I need to ask a small favor. Several times a week I crawl along the ol’ 4-nication-05 with a bladder that is near to bursting. How about we work out a system where I, and other urinary-challenged drivers, get to pull over and share your port-a-potties? Maybe we can repay your hospitality by bringing you fresh magazines to read while you’re in there working.

For those of you who don’t live in Southern California, or haven’t visited it, let me assure you that Chuck is absolutely correct about what we’ve been living through with the long construction on the 405 freeway. It’s the main freeway in town, and lots of the construction is at the nearest exit to my house, so I totally know what he’s talking about.

Now, get off his back. And more importantly, get a sense of humor!

Now if only I could think of some equally clever words to end this with!

[And by the way, I applaud him for writing the missive it in true letter form! (This page wouldn’t let it stay in that format, so look at the image to see how it’s done.) You don’t see that much in these illiterate times. You go, boy!]