Being in New York for all of March, which means never having even one second to watch television, I missed all of the American Idol shows, from the Top 24 competition all the way until last week. But, I’m catching-up now! (I DVRed them all, of course!) 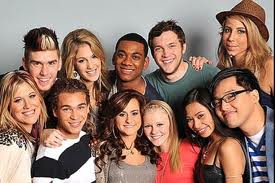 So, naturally, I have over a month’s worth of random musings on the contestants, even ones who have left already. It’s really been enlightening watching the shows just about back-to-back. It made me sick of some of them, (read: Elise,) re-enforced my love of some of them, (read: Jessica, Joshua, Heejun, and, of course, DeAndre) and gave me a semblance of respect for some, even though I’m still far from a fan (read: Hollie and Phillip.)

Phillip Phillips and last year’s jazz guy, Casey Abrams, (of whom I am a fan,) should have a scream-off. I recognize both their worths as musicians, but singin’ just ain’t their strong suit! (Casey’s much better at it than Phillip, though.)

Mr. X queried as to how the kids are supposed to take clothing designer Tommy Hilfiger seriously when he was wearing those horrible cranberry socks and even worse tan shoes! The few who listened to him looked worse than when they started! None of them seemed to want to do the image thing, except for Colton. He already has his own style, but he looked like he was enjoying going through the threads.

I do give Tommy props, though, for mentioning that Adam Lambert is the one contestant who ever came already-styled, what I call “camera-ready.” If Adam ever needs to rest his voice for a bit, (God forbid, bite my tongue,) he can definitely join the ranks of celeb stylists. He’s so gorgeous and perfect! 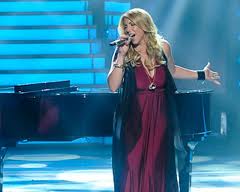 Elise Testone. As my mother would say, has she ever heard of a bra? That should have been Tommy Hilfiger's first advice to her!

Anyway, going from yin to yang, let me just list the many things that make poor Elise Testone so unattractive. From the beginning, I’ve always felt that she’s just totally unappealing for some reason. Well, actually many reasons: she’s creepy, hunched-over, looks like Bucky Beaver, has straw hair, is an awful dresser, and stoops over more every time she sings. But worse than all of those put together is that she’s just an unsupportive sourpuss and overall bad sport. At the very beginning, prior to the shows I missed, I always felt bad for her and thought, “This girl just won’t go far because, even though I can’t put my finger on it, she’s just downright unappealing.” But now that I’ve been watching all the shows, I can’t help but notice how not supportive of her fellow contestants she is! When Ryan Seacrest announces she’s in the bottom three, as he usually does, she just turns from the one who is going through and never even congratulates them! She’s the only one who doesn’t smile or be even fake-ly happy for the successful ones. It’s a shonda! [Note: I actually don’t even know what that Yiddish word means, but it sounds like it fits here and it just came out of my fingers, so I’m keeping it.] 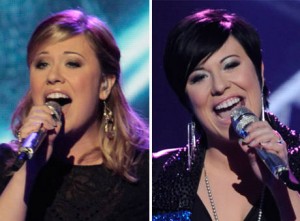 Erica Van Pelt, before, and, unfortunately, after.

This is in the “old news” category, but I just have to comment on Erica Van Pelt’s brave hair make-over, which I believe helped send her home. This is a perfect example of how TV make-overs work: If she had gone to see inane Tommy Hilfiger with the short black hair that his people gave her the night she was voted-off, they would have said that that style is too severe and lesbianic, and makes her look older and heavier, and they would have made it long and blonde, just the way she started-out on this show! I guarantee it!

Losing Heejun Han was losing the only personality that this group had! As Mr. X pointed-out, Heejun never tells a joke; he just says it right out and we know it’s funny. Well, except for Tommy Hilfiger, that is, who didn’t get that Heejun was joking when he cited Michael Bolton as the singer whose style he admires most.

Speaking of Heejun, it’s so sad that he got voted-off after he sang A Song For You; it was beautiful and his best performance by far. But, as I’ve been imploring since Day 1, give that boy a sitcom, pronto!

I’d love to witness amazing-falsetto-ed DeAndre Brackensick do a duet with Mariah Carey, although only dogs would be able to hear them.

Jessica Sanchez walks and stands so straight, but with no haughtiness.

As many people have pointed-out to me, no one this season is really star material, (at this point anyway,) personality or looks-wise, (even though Colton Dixon and Skylar Laine have real star names!,) but I’m confident that at least four of them will be very successful. So, here are my mid-season predictions: Jessica and Joshua Ledet will become major stars, like Carrie Underwood has, Skylar will definitely become a beloved player in the country music scene, Colton will be very big in Christian music, Phil may get big behind the scenes, (as a musician or producer or writer,) and everyone else will just fade away.

And don’t get me started on which jail the creepy big guy, Jermaine Jones, will wind-up in! I knew there was something strange about him from the first time we saw him. I just didn’t realize he was running from the law. So, I guess that makes him really stupid, too, because why would someone aim to be so high-profile if he’s using aliases? So, dumb, dangerous, and talentless; great choice, producers!!! With Jermaine’s history of violence, I’m just grateful you all got off easy.

Why would the producers of Dancing With The Stars show us that what Karina Smirnoff said to her partner, Gavin DeGraw, before their dance this week is that she just farted??? That is so rude to her! These people who put themselves out there week after week should be protected!!! They let themselves be miked, but does that mean they have to guard every word they say? Horrible judgement on the part of whomever showed that to us!

And, on last night’s Biggest Loser, they finally showed us the final five contestants being terrible sports about having an eliminated player come back into the fold. We read about it months ago, and we knew two of them chose to go home, in protest, and I’m shocked it was never revealed anyplace which two it was. It was the two older creepy men, who are supposed to be pastors, so their behavior is that much more surprising. But since there was absolutely no one to root for this season, except that black brother-sister team who were practically abused by everyone else in the house, I wish the whole five of the semi-finalists had left the show, as they threatened to do. Despite one of the show’s catchphrases, the pair who left truly are the biggest losers, in every negative sense of the phrase.