Trending
You are at:Home»TELEVISION»TELEVISION: THIS WEEK’S TELEVISION THOUGHTS
By Karen Salkin on May 11, 2010 · TELEVISION

I have lots of parties, restaurants, and celeb sightings to share with you, but they must wait a day because I feel the need to discuss some of this week’s television with you. First up–last night’s Dancing With The Stars:

Watching creepy Evan Lysacek dance the waltz, I couldn’t help but think that the music they should have had him dance to is the theme from Zorro, the Gay Blade. And to think that he has the nerve to continually criticize the fabulous Johnny Weir! Uh, uh, uh.

If I had the choice of hearing a conversation between Evan and the possibly even creepier Erin Andrews, two of the all-time grating voices, or spilling all my secrets, without hesitation, I’d choose the latter!!! Mr. X and I rarely agree on anything, so when we do, I feel that it’s the absolute correct thing in the universe. And every time that woman opens her mouth, he again registers his shock at the idea that anyone has ever given her a job in broadcasting! I haven’t yet met a soul who disagrees with him.

I’ve barley been able to watch the show this season because of those two. They’re just so un-likeable. And with only five people left, and Chad and Niecy being less than stellar in the dance department, we may be stuck with the two creepy ones in the final three. Kind-of nauseating. 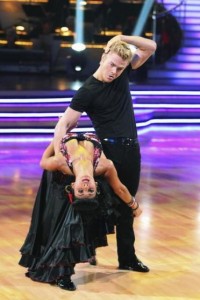 Last night’s show proved, once again, that Derek Hough is a genius. I love that boy. And Nicole Sherzinger is the perfect partner for him. I know, I know–she has tons of dance experience. Heck, she is a singer-dancer! Duh! This show always does that, because people would tune-out with only duds. Don’t think for a second that they wouldn’t! But, since it is supposed to be a dance competition, if she doesn’t win, that’s not fair!

But enough already with all the phony rehearsals spats and crying fits. It’s a television show, for crying out loud–no one’s going off to war or suffering through a disease or something like that. Everyone’s getting paid, tons of publicity, most likely better jobs after this, and having fun! So, shut the frig up and dance! Or don’t get your “people” to beg, borrow, and steal to get you on the show in the first place! Yeesh.

Oh, wait, I was just about to post this and I thought of something else: remember that for two seconds a few months ago, I had a crush on Maks, Erin’s partner? That’s over because if he really is seeing her, (which I can’t imagine, after almost marrying super-hot and sexy-voiced Karina Smirnoff last year,) then I’ve lost all respect for him.

It reminds me of this story: years ago, I met a really cute funny guy through a sexy older woman friend of mine. This Guy A loved her and always said how hot she was. Then, though the grapevine, we all heard that she was kind-of seeing this unimpressive Guy B. When Guy A learned it was true, he told me, “Now I don’t want to [sleep with] her; I want to slap her!” I couldn’t have said it better about Maks.

One quick word on the upcoming season of So You Think You Can Dance: if it ain’t broke, don’t fix it! With so many talented dancers out there, why change it from 20 contestants to only 10? That’s insanity! They’ll be pairing the new ones with dancers from past seasons, which is so dumb–viewers will vote for the old ones, too, which should not be the case. The only change they should have made is to go back to the old, cozy, audience-inclusive stage.

And, what’s up with having the super-negative Mia Michaels back as a permanent judge? Mary Murphy was really annoying, but at least she wasn’t an insecure yet full-of-herself bi-atch. The show is losing me, and the season hasn’t even begun.

Speaking of shows losing me, this season of American Idol has been just awful. It’s not just that, after Adam Lambert, everything pales, but that’s part of it. After I first saw him perform around town, way before his so deserved fame kicked in, no singer could ever hold my interest again, so I had a feeling he might have that effect on all Idol viewers. It’s mainly that the judges and producers picked mostly untalented people this year.

So, if the winner isn’t Crystal, with Mike being second, and Casey third, weirdos are the only ones left watching. (I just realized, with only four kids left, at least two out of my three have to make it.) But, for some unknown reason, those boring, wanting-to-hear-their-own-voices judges keep pumping up always flat, and sharp, Lee somebody, so I’m not holding my breath for a good outcome.

And lastly, I’m sick that the Lakers won their series last night, even though we all knew they would. I like the Utah Jazz, and everyone loves their coach, Jerry Sloane. So, I’m sick to my stomach, literally, that that smug, vomitious Phil Jackson persevered, as usual. It appears that once again, the nice guy did finish last. Shame.