Trending
You are at:Home»MUSIC»TELEVISION: THE VOICE—SEASON 4, LATE SEASON UPDATES
By Karen Salkin on June 10, 2013 · MUSIC, TELEVISION

Tonight is the semi-finals of Season 4 of The Voice, and I realized that I haven’t weighed-in on the show since April! So, let me rectify that situation right now.

This is the first season I’ve really enjoyed! (Outside of the crazy elimination of who should have been the winner, Judith Hill.) I stand by my earlier assessment…of everything about the show! (If you missed it in April, you can read it here: www.itsnotaboutme.tv/news/2013/04/08/television-the-voice—season-4.)

The only slight change is that my respect for Shakira has grown even more! She is so adorable and caring! I wish she was my friend. I love people whose thoughts and emotions you can read on their faces. And, even though she really can’t sing herself, I was shocked to discover that she can truly guide people in the music biz! That’s a talent in itself. (And, I just read somewhere that she’s a Mensa member, with an IQ of 140. That’s only seven points below mine!) 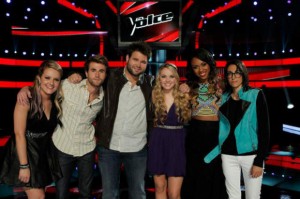 I’m still a bit confused over the audience’s apparent love for Usher’s charge, Michelle Chamuel, though. She seems like the nicest person, and sings well enough, but not great, and does nothing for me. But I think that everybody left in the competition is good. Some of them just must sound better in person, to justify the wild applause and standing ovations.

The only thing I hate is all the smoke the mentors keep blowing up the competitors’ butts. They throw props around like, “You’re the most important person in country music right now,” and “There’s no one else like you out there,” etc. because, really, have any of us ever heard of any of the past contestants ever again, except for an occasional guest appearance on this show??? The answer is no. I’m the only person I know who even remembers the name of the first winner, (*okay, think for a second, and the answer will be at the end,) and even I don’t know the names of the next two.

So, we can hope for the best for this year’s crew, but we, and they, should keep our expectations of their futures low. I must say, though, that that young country girl on Blake’s team, Danielle Bradbery, does seem like she’ll make it in her genre; she doesn’t seem special to me, but that branch of the biz always seems more open to giving people chances to grow. And she just looks right for them. And you know Blake will push for her to get in there.

As the season went on, I did realize that this new system of losing anybody from any team at any time is definitely more fair to the competitors, (as opposed to the old “one from each team” approach,) but now I feel bad for the coaches who could wind-up with no members for the finale. Adam and Blake do seem more invested in the outcome than usual because of the change. [Note: it may have been that way last season, as well, but I didn’t get to watch any of it, so I don’t know.]

I personally hope that fellow Brooklyn girl, Sasha Allen, is the victor, but I equally like the Swon Bros. It seems like the one to take it all will be one of the aforementioned females, though, Danielle or Michelle. But everyone was sure it was going to be Judith until her shocking elimination two weeks ago, so no one really knows. There could be a shock at the end, and low-key Amber Carrington could just pull it out. We’ll all find out together next week.

*The first season winner was the wonderful Javier Colon, of whom I haven’t heard since that finale!