Trending
You are at:Home»TELEVISION»TELEVISION: SO YOU THINK YOU CAN DANCE—SEASON NINE
By Karen Salkin on July 18, 2012 · TELEVISION

SO YOU THINK YOU CAN DANCE—SEASON NINE

Tonight brings the first elimination on the new season of So You Think You Can Dance, a double one at that (actually, four dancers will be leaving,) so I figure it’s time for me to finally start weighing in on this show.

I love the dancers and dances always; the judges, not so much. I’m so sick of Mary Murphy screaming, and Nigel Lythgoe being full of himself and thinking he’s so clever with his comments, which always just sound lecherous. And Zooey Deschanel as a guest judge on the first show was just ridiculous! It was only because she has the top show on Fox; she had nothing to say, and her speech patterns are just annoying off her show. I really thought they were an acting choice of hers, not her way of life! 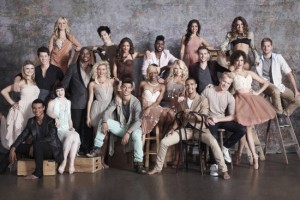 So, these are the few notes I took from the first live show, which intro-ed the Top Twenty, followed by my thoughts on the first competition show, which was just last week:

I love Cyrus, the “animator” dude, but he doesn’t belong there. It’s not fair to real overall dancers. And, so far, he’s a far cry from Russell Ferguson, the krumper who won a few seasons ago. The latter had real dance ability, whereas Cyrus is absolutely amazing…in animating, but nothing else.

I predicted most of the Top 20, just by whom the producers were promoting during the audition process, not by how good anyone was.

That silent film-looking chick, Amelia, whom I can’t stand so far, has her colors flipped; her teeth should be white and her skin should have some color!

Once again, while we’re trying to watch the dancers, in the audience’s perspective, the director makes the cameras do that same stupid, go-around-the-back thing that is so darn annoying!!! Has she never seen a dance show before???

And here are my new thoughts, on last week’s episode:

The voting process is so crazy this season, and for once, it’s not Nigel’s fault. It’s that of Fox, for not giving them the extra results night. That’s just nuts.

I like almost every guy better than any girl.

Mr. X said that Cat Deeley, the host, is “pathetic.” She seems to think that she always has to walk out with, and come back from every commercial break with, that phony laugh.

She called Mary Murphy “Mia Michaels,” which is so insulting to Mary, who’s been the permanent judge since Season 3! How would Cat like it if Mary called her “Ryan Seacrest?”

And why is she aways picking her nails? Isn’t she comfortable being host by now??

How did ballroom dancers Witney, Nick, and Lindsay get to dance in their own style on the very first competition show??? Not fair.

With the stupid text voting, where you text your favorite dancer’s name to vote, the winer will wind-up being the one whose name is most easily spelled!

I love Aussie ballet dancer Daniel. I feel he got screwed with that oddball routine in the red outfits. I really wanted to see him do a dancer’s version of “wailing.”

I love Will, the big flabby guy!

I can’t believe I was verklempt over Cyrus!!! I love that he wants to learn so much!!!

Mr. X said Eliana, the ballerina who danced the Broadway routine with Cyrus, dances like Patty Lupone sings, which is a major compliment meaning she goes all-out. She’s my favorite girl because she’s a ballet dancer with personality, which is rare, let me tell you. [Note: I was a ballet dancer, way back in the day, and I swear, not one of them, (outside of me, of course!,) had anything to say!]

On the pairing of Cyrus and Elian, before they danced, I thought they were saddling her with him, but it turned out not to be the case. (For that routine only, I’m sure, as choreographer Tyce D’Orio tailored the routine to fit Cyrus.)

The guys and girls are finally getting voted on separately. It’s about time!!! I’ve always hated that we had to vote on the couple, which was far from fair. Now I hope that the pairs change every week, not after five!

All that came out of my mouth when Cole and Lindsay were done dancing that masterful Paso Double was a simple, understated, “Oh my God.” It was the most professional dancing I’ve ever seen on this show! Ever!!! I felt like I was watching someone from a major dance company. He was the star of it, but she hung in there with him, so big props to her. The powers-that-be over there were smart to save that one for last because no other routine came close.

So, now we come to tonight’s eliminations. I’m sure I’ll be sad no matter who’s eliminated because, for perhaps the first time since it’s been on the air, every single dancer is talented. That being said, I think that ballroomer Witney is not at all the big deal she’s cracked up to be, and red-lipped Alexa is nothing to write home about, either. But the producers have featured those two so much that I think they’ll be safe. Sadly, while all the others were getting a break in their first dance style last week, fabulous ballet dancer Chehon got screwed, so I don’t have much hope of his being around come next week.

If it were up to me, I could lose any two of these girls tonight: Amber, Alexa, Witney, Amelia, Janelle, Janaya, or Tiffany, (I didn’t even remember those last two were on the show!) I hate losing any of the guys, but the four I’d miss least are: Dareian, Nick, George, and Matthew.

We’ll see how it plays out tonight, and I’ll comment on the season as it goes along. Good luck to all!