Trending
You are at:Home»TELEVISION»TELEVISION: SO YOU THINK YOU CAN DANCE 2012 SEASON FINALE
By Karen Salkin on September 18, 2012 · TELEVISION

SO YOU THINK YOU CAN DANCE 2012 SEASON FINALE

Tonight brings to an end one of the finest seasons we’ve ever had of this show. Seriously. And that two ballet dancers, Eliana Girard and Cheon Wespi-Tschopp, could possibly win is making me downright giddy. (I’m worried that the other duo will take it, though, but it really should be these two all-time greats of the series.)

I don’t have much more to say about Season 9 of So You Think You Can Dance. I feel that they outdid themselves this year, both in the choice of dancers and the choreography. Speaking of which, I recently bumped into Stacey Tookey, the day after her angst-filled number for Cheon and Alison Hoker brought down the house. If you missed the context yesterday, you can read about it here: www.itsnotaboutme.tv/news/2012/09/17/gifting-suites-doris-bergmans-primetime-emmy-style-lounge-party) 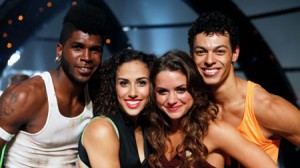 There are, of course, several aspects of which I’m still not a fan. Judge, (and executive producer, which he needs us to constantly be reminded of,) Nigel Lythgoe’s still full of himself, the direction is still weak, and host Cat Deeley is even more annoying than ever. Mr. X can barely watch her anymore. He said she’s the definition of “saccharin.” Her whole presentation is just so phony. And that insane finger-picking. Ugh. And we get a tad queasy from her crazy witch-cackling.

But judge Mary Murphy is actually a little better this season. I agree with most of what she says, I get choked-up at the same times she does, and she was much less screamy than in other years. An occasional guest judge was knowledgable and articulate, like last week’s Rob Marshall, but unfortunately, both Mr. X and I were so disappointed with the phony-ness of Christina Applegate. We had become fans when she did Samantha Who, but we didn’t know how she is in-person until this show. Not our cup of tea. As Mr. X said, it’s so disappointing.

Speaking of disappointing, we hated that Fox cut them down to just one night a week, which meant no isolated results show. That meant that the dancers had to get jacked-up to perform, then let down by the results, both in the same night, which was difficult to watch. One of the best parts of the series has always been seeing them all dance with abandon at the end of each competition show; that’s where we saw their real personalities come out. This season, each week ended with tears and sorrow, and we never got to share their joy first. It was a real shame.

But they did the best with what they were given. I just hate that it worked-out well enough, because now Fox will make them do it this way again next summer!

So, back to my original sentiments; that Eliana and Cheon come out victorious. I was afraid all season that Cyrus would win. No way, would say Mr. X. But now he’s a tad worried, too. Cyrus is infinitely likable, (as are they all this season,) and he’s amazing in his own style of “animation.” But he was the weakest one with every other style. But the judges pumped him up the whole time, which really wasn’t fair; he was held to a totally lower standard than the rest. And Nigel finally admitting, on that last competition show, that Cheon deserves to be the male winner, (there’s one of each sex this year,) may have backfired by inspiring people to throw Cyrus the sympathy vote.

Winning really doesn’t do much for the careers of the dancers, anyway; runner-up Twitch is one of the most successful dancers from this series ever, while no one ever sees of hears of Joshua, the winner that season. It’s all just a stepping-stone for these kids. And this season, with the double winners, they’ll each earn less than half of the previous winners’ windfalls. Unfair.

But, it is what it is. With all my own problems this year, I have a feeling that I’ll be more accepting of whomever wins this season But I’m still rooting big-time for Eliana and Cheon. As Cat says ad nauseum, fingers crossed.