I’m so happy that The Voice and The X Factor finally ended their seasons this week. Watching those shows is exhausting! But I can’t help myself.

This time I’m happy to report that both shows came up with the correct winners. (So, great job to all us voters!) But their roads were very different, as were the finales. Let’s briefly examine them.

[Note: Even though The Voice is a zillion times better show than The X Factor, I hate that they both play up sob stories for most of the contestants. Both these shows, and several others, are turning into Queen For A Day. (It’s a famous old school TV show where the biggest sob story won. Seriously!) I’m glad that Alex and Sierra didn’t do anything like that, which I’ll discuss further in a second.] 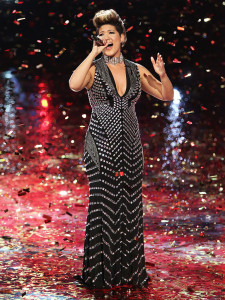 I was scratching my head over many of the original choices from the “blind auditions,” but the second I heard Tessane Chin, (and despite the fact that I’m not a fan of Try, the Pink song she sang,) I told Mr. X that she’d be the winner. It was a long way to get there, but I’m so glad she persevered. It would not have been fair otherwise.

While this is the most entertaining competition show, mainly because of Blake Shelton’s humor, I still don’t like the way the four celeb judges keep lauding all the contestants, even when the singers are far from deserving of the praise.

But I was satisfied enough with the final three. I actually really like underdog Will Champlin, but I wouldn’t have had Jacquie Lee in there; she sings great, but she’s basically a screamer, which I feel is because she’s trying to emulate her mentor Christina! Christina is definitely not a screamer, but a youngster can perceive it like that. All of Jacquie’s stage moves, (like falling to her knees during her songs,) came directly from her mentor, and not from her own soul. It was so false. I think she’ll get better as she matures because she does have an excellent voice.

Last note here, and it’s about host Carson Daly, who does a pretty good in that role. He’s supportive of all, and basically stays out of the way otherwise, which is a pleasure compared to every other host, who tries to make it about his or her self. (I’m talking to you, Ryan Seacrest and Cat Deeley.) It is weird, though, that he pronounces his “s” sounds with such sibilance. We laugh every time he does that. 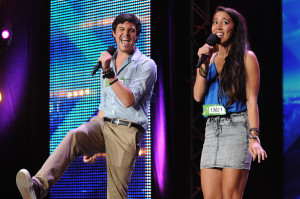 Winners Alex and Sierra performing at their first televised audition.

The only saving grace of this deathly boring finale is that young and in love duo, Alex and Sierra, emerged the victors. They sang great, and they’re just adorable together. And they seem like really nice people.

They remind me, in a way, of ice skating greats Ekaterina Gordeeva and Sergei Grinkov; they were also a young and in love couple who performed together, to great success. Even though Sergei is tragically no longer with us, I always remember how his young wife looked at him after they performed their gold medal winning long program at the 1994 Winter Olympics. They had already won the 1988 Olympics, at least four world championships, and just about everything they had ever entered, yet when they finished that particular program, Ekaterina held Sergei’s hand and turned to him with a little girl look that appeared to ask, “Did we do enough to win?” Sierra had the same demeanor towards Alex after their first addition for The X Factor. It was very sweet, honest, and endearing.

So that part of the show was great. But the two hour finale, as a whole, was horrible. Instead of being a fun show, celebrating this season’s top thirteen contestants and giving them a chance to be heard with no pressure on them, including having the thrill of dueting with famous people, (as most shows like this do, including The X Factor of the past two years,) they just had a few music biz celebs sing by themselves. And not even their hits! They did all new material, to promo them. So not special.

But worse than those duller than dull performances was having host Mario Lopez constantly asking the final three the same question in several different ways, all trying to evoke tears from them. I swear, here are some of his inane questions to those top three: “What do you want to say to [insert anyone here—your family, your friends, your mentor, the judges, your home town, anyone you’ve ever met]?” “How are you feeling right now?” “What’s going through your mind right now?” “How would it change your life?” You get the idea. As Mr. X observed afterwards, it as two hours of cliches.

He needs to stop asking the contestants and mentors what they want to say to each other. Just do it in private, and leave us out of it. The producers, (which means Simon Cowell,) must think that all the viewers are idiots.

Back to the sob stories for a second. Runner-up Jeff Gutt actually stated that he needs to win because he needs the prize money for his very young son because the kid wants to be a doctor one day! And third-place finisher Carlito Olivero kept begging people to vote for him because he didn’t want to work in a coffee shop anymore, and he wanted money to support his parents, who are young and able enough to earn their own livings. Alex and Sierra were always just nice, and never complained or begged, or said stupid stuff like that they’ll do better or not let us down. They deserved the win for that attitude alone!

The blame for that begging doesn’t belong solely to the contestants who did it; the producers designed it that way by having them always talk to the audience. Don’t they realize that we don’t have to hear these people, (who are not very bright to begin with,) keep saying the same thing over and over again? If I hear one more idiot say that “going home is not an option,” I’m going to puke. Guess what ? It not only is an option, but every single person on that show, including the winner, is going to go home at some point! Hearing stupidity like that really does boil my blood.

And in semi-related “breaking news” yesterday, two-year judge Demi Lovato announced she won’t be back next season. Nobody cares, except to be surprised about the announcement because I’m sure we’re all thinking, “Will the show???” No one will know until May!!! With the absolutely dismal ratings this season, the probability of Fox pouring any more money into it is slim. But who knows what deal Simon Cowell will bring to them. He does seem to have nine lives in show business.

Even though I watch this show, I won’t mind at all if it’s canceled. It has the worst format, the worst judging panel, and just seems like something that should’ve been on in the ’60s. I think this kind-of stuff works better in England, for some reason. They seem to have a different artistic sensibility over there. 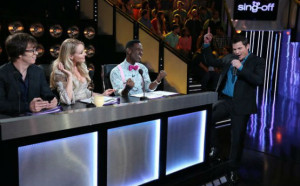 We’re not quite at the finale for this one, even though if I did read my DVR Guide correctly, this show is on for only two weeks. But I think it’s three shows a week, or something like that, so I’m not quite sure if the audience is ever going to get a chance to vote for the winners, or if they’re going to be chosen by only the three judges. (I think next week has only one episode, and it’s the Final. But maybe they’ll make it a two-parter. I don’t have the interest to check on the sked.)

But I just had to comment briefly on The Sing-Off because the addition of Jewel as one of the three judges has brought so much to the proceedings. She’s a fount of musical knowledge! And she states her points briefly and succinctly, as opposed to Christina Aguilera of The Voice, who rambles on and on, and says nothing. Christina is insincere for the most part, and always seems to be talking just because she thinks she’s being so profound. And the phony use of her hands is just kind-of nauseating. Jewel is exactly the opposite, which is a breath of fresh air on these competition shows.

Host, (and former, and possibly on-again after I heard him sing a few lines last night, crush of mine,) Nick Lachey, seems to have gotten much better, and more comfortable, at his job, as well. The a cappella groups seem to be more talented this season, too. And with the shorter schedule, this show seems to be a winner so far this go-round. This lots-of-shows-in-a-short-time-span way of doing it is working for me. Even with the groups being a bit higher quality than usual this year, I agree with the new “let’s just get it over with” attitude!

Last night determined which three groups will be in next weeks final, (notice the singular of that last word; if you missed yesterday’s rant on that topic, you can read the reason here: itsnotaboutme.tv/news/karens-rants-final-versus-finals,) and even though the other two groups do nothing for me, I’m happy that country quintet, Home Free, made it. I’m crossing my fingers that they’ll be the winners.

We’ll find-out next week. If they win, it will be a hat trick of winners of singing competition shows for me this Fall. And as a fan of fairness, I’ll be happy with that accomplishment, even as not important as it is in the scheme of life.