Trending
You are at:Home»TELEVISION»TELEVISION: RANDOM THOUGHTS ON DANCING WITH THE STARS
By Karen Salkin on October 16, 2011 · TELEVISION

RANDOM THOUGHTS ON DANCING WITH THE STARS

Every time I watch this show, new thoughts occur to me, usually negative ones, so, of course, I want to share them with you! Here are some: 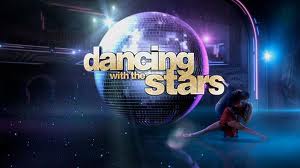 I’m so sick of these erroneous voting messages! I always feel that if you’re watching these shows at all, which means that you’re at least somewhat interested in the outcomes, then you should vote. But the Dancing With The Stars voting system just sucks, on most levels.

I actually love that there’s not only a voting limit, but they let you know when you’ve reached it, so that you don’t have to keep count of your votes. (Some series’ just tell you that “only your first ten votes count,” so if you sit there mindlessly hitting those phone keys while you’re doing something else, it’s your responsibility to count.)

But, they have a policy that’s so stupid, not to mention unfair; they let the public start voting as soon as the show comes on, which means that you don’t even have to watch at all! The couples keep the same numbers all season, so, if you have your favorite, no matter how anyone performs, you can just vote for them. That makes it even more of a popularity contest than a dancing one than most people realize. Why don’t they just dispense with the dancing all together? Or the show, for that matter. Their website could just list a dozen supposed celebs and tell you to vote for the one you like best. Because that’s what it essentially comes down to, after all.

Not only that, but they make it hard for the people who do want to vote fairly, by having a very short voting window after the show!!! So, if you’re a little behind in the watching, you can’t even watch everyone in time to fairly vote. What is this? The fifties, where families sat in front of their TVs and watched in real time?

I can’t take Brooke Burke‘s stupid questions anymore. Her whole presence on the show bothers Mr. X, but I don’t mind her because she’s basically just a robot spitting out what’s on the teleprompter or what they tell her in her ear to say, thus she doesn’t get in the way much. But when it comes to the post-dance interviews, her inanity is like nails on a chalkboard to me. My teeth hurt just thinking of it. 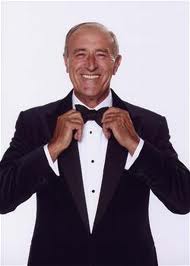 I’m also sick of judge Carrie Anne Inaba‘s stupid “lift” rules. She takes off a point if she thinks she sees a lift, which is dumb to begin with. The real dance judge, Len Goodman, doesn’t even do that! (BTW—what are Carrie Anne’s ballroom credentials??? her claim to fame is that she was a Fly Girl on some show in the 80s, which is hip-hop, not proper ballroom dance. Marilu Henner, who’s involved in that world for real, would have been a much better choice for judge to begin with, even though I’m not a fan of hers, either.) It’s not like the dancers are flaunting the rules and doing real lifts; Carrie penalizes them when someone’s foot comes off the floor by accident. What an annoying idiot she is.

On a similar note, since even Len and Bruno don’t like when dances don’t follow the exact outline for what a professional dance constitutes, the producers need to decide if dances have to be strict rules in that style or if they’re allowed to do stylized versions for entertainment purposes. 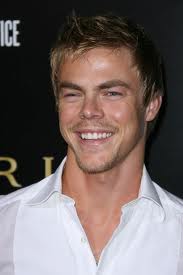 The adorable, and uber-talented, Derek Hough.

Ricki Lake is given much more credit than she deserves from the judges, and media, and idiots everywhere. But the credit should not go to her at all–it’s all Derek! Ricki’s partner, three-time champion of this show Derek Hough, could have won with Cloris Leachman! He’s the most brilliant choreographer and amazing dancer. All Ricki does (and the rest of his partners did) basically, is not get in his way. And he’s always careful to not out-dance his partners, so they kind-of blend in to him. 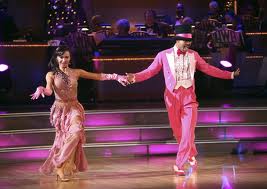 Conversely, J.R. Martinez does not get enough credit. He’s just as strong when he dances side-by-side with his pro partner, Karina Smirnoff, as when they’re in hold. And when they are in hold, he looks like the man, leading, and not just hanging on while the female pulls him along, or stand there while she dances around him. His Pink Panther routine this week was a perfect example of that; yet the judges told him it wasn’t good enough. He deserved thens, not two nines and an eight. Maybe they just don’t want to look like he’s their favorite. The producers know how many votes each duo gets and probably “encourage” the judges in certain directions. 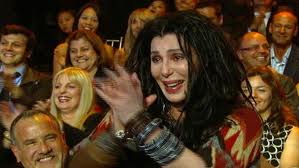 I think this week, when Cher watched Chaz dance to the theme from Rocky, we witnessed a never-before-seen occurrence from her. I think that, for a few minutes, she actually forgot that she was Cher. It’s probably the only real, non-self-conscious moment she’s ever had in public.

Also, has anyone else noticed that, rather than Chaz losing weight, like most of them do, his partner, Lacey Schwimmer, is gaining?! That’s the first time in thirteen seasons that I’ve seen something like that.

That’s it for now. But maybe next week, I’ll comment on what this week’s show will bring.