I’ve watched most of this season’s new shows, and have some quick thoughts on them. Of course, I couldn’t sample them all, and there may be more to come, but here are my impressions so far:

Hawaii Five-O–couldn’t get past the first ten minutes, even with the exactly-my-kind-of-looks Alex O’Loughlin as the star. CBS just keeps on giving him series to star in, not realizing that the poor guy is just not a good, or even interesting, actor. 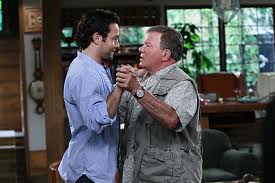 Bleep My Dad Says–I’ve seen two episodes so far and it is pretty funny, as I had anticipated. It’s about time someone thought of giving William Shatner a sitcom. I’ve really never seen him act before, I just realized, but he’s been funny on awards shows, so he seems like a natural for comedy. That being said, Mr. X and I did have a couple of problems with the second episode. Threatening people with guns is never funny, and watching a big, heavy guy keep retching, especially with his unattractive tongue, did more for my diet program than even Biggest Loser. And I hate the stupid series title.

Blue Bloods–I’m actually kind-of interested in this family cop drama after viewing the pilot. We’ll see how long I will be, but there’s something I find very interesting about Will Estes, who plays the youngest son.

Defenders–just way too boring and dumb to waste any more time on. And, having never seen him act before, I realized that I find Jim Belushi unappealing.

Mike and Molly–while I applaud a network giving a series to overweight actors who haven’t played leads before, this show made me a tad uncomfortable. In fact, the first first minutes was nothing but “fat” jokes! And it looked like that was going to be the whole purpose of the show. It made me sad, which is not what the purpose of a sitcom is supposed to be. I had to stop watching.

Chase–this is your basic formulaic action cop show. Attractive single man and woman federal marshal duo, ethnic sidekicks in the office, nescient newbie who goofs-up, everyone wise-cracking. Nothing new or clever about this one, but it might be good on a slow night, which Monday is definitely not! And both of the first two shows had way too many killings for me. 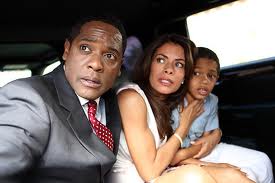 The Event–Mr. X and I were chuckling about how hard it was to keep track of the pilot, with every few minutes showing us a different sign letting us know that this was “thirteen months before” or “eleven days before,” or something like that. And we weren’t sure when it came back to “now,” or if the thirteen months were before the eleven days or the few hours or the now or the apocalypse. I understand that shows like this are fearful of going in linear order because the audience needs to be grabbed from the top, but we also want to know what’s going on!!! But I’ll stick with this one until I get heavily invested in it and then they end the season with an amazing cliff-hanger then cancel it, as happens with all my stick-with shows.

Outsourced–Mr. X had high hopes for this one; I didn’t. I won. Worse than the rude stereotypes of people from India, it was just plain boring.

Outlaw–speaking of boring, I couldn’t get through this one at all. I actually like Jimmy Smits (he was really lovely to a guy friend of mine several years ago,) but I had to keep pausing it and doing something else. But even that way, I couldn’t make it through the pilot.

ABC (all misses, with two that the jury’s still out on)

Detroit 187–couldn’t get past the first three minutes on this one! And the scheduling of it is the dumbest I’ve seen in years. As Mr. X pointed out, no one wants to go from the glitz and frivolity of Dancing With The Stars, even on the oh-so-sad elimination night, to bloody corpses that died horrible deaths in a city that’s a tragic shell of its former industrial self. 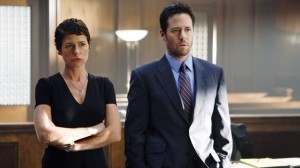 The Whole Truth–yet another show where’s there at least one actor, Eamonn Walker, who speaks so poorly it’s hard to make out a word he’s saying. Having quick, snappy dialogue may work fine for some films, but in TV, where nothing’s in real time anyway, it’s just annoying and makes it hard to follow the plot. And I’ve been to a lot of lawyers offices, (no worries–usually to meet them for lunch, nothing legal,) and never once have I seen anyone tell the team, “let’s rock and roll, people,” while dunking a basketball in an office hoop, when beginning a murder case. It’s all so pat. The only redeeming feature of the show is that I can always watch the leads, Maura Tierney and Rob Morrow, when I need to fall asleep.

No Ordinary Family–this one was so boring, I had to force myself to watch it, and did so in increments. I’ve heard that Michael Chiklis is a good actor, but had never seen him before. And now I can’t get past his weird, thin voice. It’s hard to listen to. He might be good as some weird secondary character in a movie, but just doesn’t cut it as the lead actor in an hour-long series, for me. The story is beyond boring, so forget that. This show did remind me of one thing in show business I’ve always found curious–why do so many shows feature attractive wives of unattractive husbands? That rarely happens in real life, unless the husband is loaded. And why do TV shows never feature the reverse–a handsome husband with a miskite wife??? (Then maybe I’d have a shot at starring with Hugh Jackman!) Just wondering.

Better With You–this is one I’ll watch if there’s nothing else on, rather than make an appointment with it. I have a feeling the show will be successful because it’s sandwiched in-between two hits, The Middle and Modern Family. I do like the device of opening with how three different couples in one family handle basically the same situation. Clever.

My Generation–this mockumentary of a group of high school students ten years later is actually an interesting concept, with excellent acting, especially by Keir O’Donnell as the nerdy, shy Kenneth, if you have the patience. Episode two got me more involved than the first, but I noticed that I had to force myself to sit down and watch it, as opposed to most other shows I’m a fan of, that I can’t wait to see. I have a feeling the network may pull the plug early on this one, but I hope they give it the chance it deserves, especially if I get engaged with the characters. [Note–they just cancelled it, right after I watched episode two and decided to make it a regular for me. Of course.]

The more I watched, the more I realized just how much work went into this show, with coming up with each character’s back stories and all. Gave me a brain hernia just thinking about it.

And also, did anyone else notice that the voice of “documentary” interviewer sounds like Katie Couric? Do you think that’s intentional?

FOX (two misses and a maybe)

Lone Star–Boy, did they make this show look different in all the really long promos for it! I thought it was going to be some smart, complicated, someone-to-root-for show, ala Prison Break, but instead it’s about a young conman! Who cares?! He wants to get out, but his father makes him stay in. Yeah, sure. And knowing how much wrong he’s doing, he decides to be a bigamist, which is absolutely not necessary to his scam at all. So, do we root for a horrible person like he is to be successful, or for his worse father to have his son continue in his footsteps, or perhaps for the slimy brother-in-law who’s trying to bust him for something? I know–how about for FOX to not waste anymore of our time with this drivel??? (Midway through the second episode I realized that I didn’t want to waste anymore of my precious on this and deleted it.) [Note: they already cancelled this one, too, right after I wrote this!] 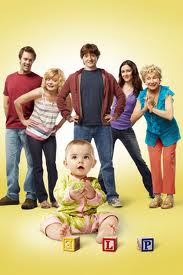 Raising Hope–I really don’t know what to say about this one. My emotions and thoughts ran the gamut from hearty laughs to revulsion to the depths of depression, all in the space of thirty minutes! (Actually twenty because I sped through the commercials, as we all do. Why do they even bother with them anymore?) For those who don’t know, this is a sitcom about a young guy raising his baby with the reluctant help of his parents somewhere in middle America. The writing is totally clever, but, if acted differently, it would be the most gut-wrenching movie to rival Precious. (Okay, I might be carrying it a little too far.) If it were a documentary, and the subject very well could be, I’d have to take the memory-erase pill right after I saw it.

Mr. X and I had just settled-in with a long awaited meal, and a few minutes into it, I had to push my plate away because I was too nauseated to eat during it. [Note: the correct word is “nauseated,” not “nauseous.” I’ll explain the difference some other time.] It’s easier for me to eat during Biggest Loser than this show! Mr. X said, “I can’t believe what I’m seeing! This makes Saturday Night Live seem mild!” (The offending scene was three people puking in succession, with graphic visuals. This, on a sitcom!!!)

To sum it up, it was funny, well done, and had excellent acting. (Love this new kid, Lucas Neff, and Martha Plimpton is always perfect. And I’m especially happy to see Cloris Leachman back on the tube.) And I’m glad they threw in a touch of humanity near the end. But it may just be too depressing for someone like me, who feels the world’s pain on a daily basis. For the rest of the people I know, it should be no problem, if you get my drift.

Running Wilde–I couldn’t get past the pilot. This is just a snooze-fest. I think the main problems are the writing and directing, but the acting isn’t far down the list. Kerri Russell is just not a comic actor, and although Mr. X thinks that Will Arnett is a funny guy, you can’t prove it by this nothing show.

Although I’ve long been a fan of Gossip Girl and One Tree Hill, and of the first three years of Smallville, I just hate Life Unexpected and 90210. So, I didn’t even bother with Nikita and Hellcats, whose trailers looked awful.