Trending
You are at:Home»TELEVISION»TELEVISION: MY SUMMER OF PERRY MASON
By Karen Salkin on September 22, 2020 · TELEVISION

MY SUMMER OF PERRY MASON

One of my absolute, hands-down favorite TV shows of my entire life is Perry Mason. And now it’s become relevant for me again because, on this first day of Fall 2020, I’m here to tell you that this classic TV show absolutely got me through this entire trying summer! 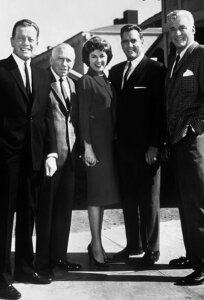 Well, the real TV version of Perry Mason did. Right after I began watching the Raymond Burr series this summer, I found-out that HBO is showing a new, and very different, rendition. My outrage about that situation cannot be contained. (And the extra pain of it is that they picked the new show up on…my birthday! Not a fun b-day gift for my purist self.)

I’m about to discuss the real one right in this article, and then you can watch my rant about the bogus series, (even though I know some of you are fans of it,) in my latest YouTube video right here: www.youtube.com/watch?v=7pmz3-qY3n4&feature=youtu.be.

First, a bit of background on it all. I most associate Perry Mason with being little and having my beloved nanny, Edna, baby-sit on Saturday nights. She’d let us watch all kinds of syndicated shows back then. (During the day, when I was home sick, I always watched very old sitcoms, such as Topper, My Little Margie, and Oh Susannah—TV has never been better for me than those times. Except for my own former cable show, of course. No one got a bigger kick out of me than…myself!)

But on those Saturday nights, Edna somehow found not just Perry Mason, but…How To Marry a Millionaire! I think that one was on at 11:30, which was a forbidden hour for my young self.

Which brings us to this summer. The dreaded one of 2020. Just as I was about to begin tearing my hair out—because I’ve watched about a hundred times the amount of news I ever did before, (in regular life, I’ve rarely been home by 11PM, and I didn’t watch news at any other time because I was way too busy writing about my glamorous life, prior to the pandemic isolation)—I started craving the simpler times of Perry Mason. 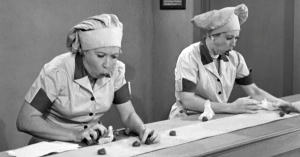 This is what I feel like trying to watch all the Perry Mason episodes on my DVR!

So, I put a timer on my DVR to record the show if ever a station was kind enough to play it, hoping it would be on once or twice. Well, imagine my shock when I found-out that Perry Mason is on somewhere several times a day! I feel like Lucy and the chocolates on the conveyor belt, trying to watch them all before they fill my DVR to capacity! (I hope to be privileged enough to see all 271 episodes before the quarantine is lifted next year.)

But, until I got uber-involved with the recent NBA play-offs and US Open tennis tourney, I was happily watching an average of three episodes a day this summer! And I roped Mr. X into doing it with me. And now that tennis is finally over, which frees-up about twenty hours of each day for me, we’re back on the Perry bandwagon. 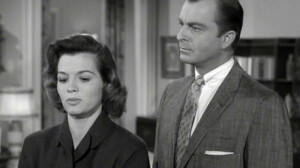 Angie Dickinson on Perry Mason back in the day.

After each episode, while the credits roll, we research all the old actors we just saw. But first we try to figure-out who some of the more famous faces are, like a very young Ruta Lee!

And the most famous guest ever has been—drumroll, please–my very own dear friend, Angie Dickinson!!! We were shocked when we saw her. When Mr. X said, “That looks like Angie,” I thought he meant the girl just looked like her. But it was her! She told me afterwards that it was one of her very first roles, and I’m happy to say, she was perfect on it! I could totally see why she became such a big star! 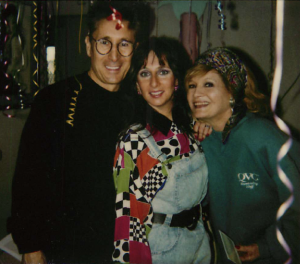 So far, none of the episodes have been ringing a bell for me (because—how many could I have ever seen in my life up until now?) But there’s one I totally remember and have been looking forward to, because it involves lipstick and…my name! There was a title I saw on my DVR list that I thought would be it, The Case of the Lavender Lipstick, and my mouth was watering to see it. But my linear mind has to watch them all in the order that they’re being recorded now, and this one was in the middle of the pack. And then…it’s one of the episodes that has mysteriously disappeared from my DVR! (And no—Mr. X did not delete it. They just keep disappearing, and not even into the Trash on there! No one can figure-out what’s happening to them.) So now I have to wait until that episode comes back around. (Knock on wood that it does! And soon.) 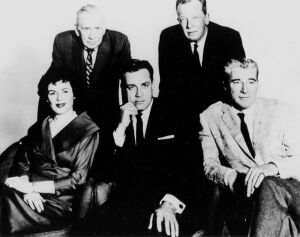 I especially appreciate that there are never superfluous story bits in the entire series. Thank goodness the writers spent all the screen time on the uber-complicated storylines instead of the characters’ personal lives, like way too many of today’s scripts do. The only personal things about Perry and his cohorts that we get let in on is in the two-minute tag at the end of each episode, where Della often asks things like, “Which of you handsome gentlemen is taking me to dinner?” That’s really it. There are none of the complications in these scripts like dating issues, someone trying not to drink or do drugs, money and family problems, and things like those, which have nothing to do with the murder mystery. But modern screenwriters seem to feel that they must throw in little personal bits; they think they’re fleshing out the story, but they’re just confusing the tale we want to see in its conciseness. I’m just saying. 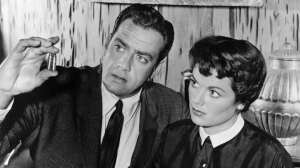 Everyone always wanted to know what was up between Perry (Raymond Burr) and Della (Barbara Hale)!

And the music—OMG! That iconic Perry Mason theme is just the most perfect marriage of a series and a tune. Just hearing those first few dramatic notes literally makes me so happy. And now, Mr. X walks around the house whistling it—he can’t help himself. I keep thinking that means he’s suggesting we watch an episode right then, but it does not; he just loves that theme song, by Fred Steiner, (no relation to Max Steiner, you film buffs,) as much as I do. (And I’m sure, everybody does!)

And, since you’ve read this far, here’s a little confession for you: I realize I have a crush on Perry! Not on Raymond Burr; on the character himself. 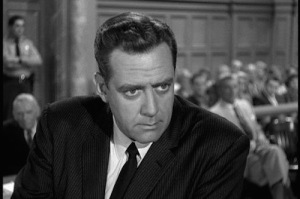 If I had known Raymond Burr’s big eyes were blue, I would have had a crush on Perry much earlier than now.

I know they tried to do a The New Perry Mason in 1973, but, of course, it bombed. As I was hoping this new one on HBO, which totally changes the entire scenario, (Erle Stanley Gardner is probably rolling in his grave!,) would. (But, alas, no such luck.) Because, as the more cultured among us know, there’s only one Perry Mason, and he’s Raymond Burr!!! For my rant about the entire situation, here’s the link to my video about it again: www.youtube.com/watch?v=7pmz3-qY3n4&feature=youtu.be.

So now that the tennis tourney is over, I’ve gotten back to my beloved Perry. And trust me, I’m grateful for its calming influence in this increasingly sad and stressful year. I suggest all of you join me in giving the old show a whirl.