Trending
You are at:Home»TELEVISION»TELEVISION: EXAMPLES OF RUDENESS ON TV
By Karen Salkin on August 26, 2010 · TELEVISION

EXAMPLES OF RUDENESS ON TV

Last night, while watching America’s Got Talent, (please don’t judge me for that, btw,) I realized what an awful example parts of these talent shows are setting for kids! I can’t believe that it never occurred to me before. (So You Think You Can Dance is excluded from this, because dancers always seem to revere their elders and mentors. So, good for them.) 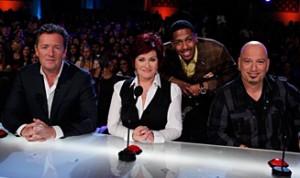 The "America's Got Talent" judging panel, with host Nick Cannon.

Actually, I’m going to digress a bit here because I just thought of something. I am incorrect for saying “good for them” in the above paragraph because people shouldn’t be lauded for being polite–that should be the norm! And I have a little parable about that to share. Then I’ll get back to my points about these shows.

When my mother and I used to spend recent summers in Aspen, she always rented a car and returned it on her way to the plane at the end of her stay. But one year, she wanted to return it the day before, to have less hassle the day of her flight. She planned to take a taxi to the airport, but my wonderful girlfriends there, who are among my favorite friends of all time, Gina, (from South Africa,) and Alex and Simone, (from Austria,) genuinely offered to take her, which even meant taking time off work and borrowing a car.

Never one to make a fuss, (seriously, except about silly things,) my mother insisted they not. Of course they went back and forth in their insistences, but my little mo won out. I still thought it was so incredibly kind of the girls, and called Alex to thank her for being so nice. She said, “Thank us for what?” I answered, “For offering to take my mother to the airport!” Without skipping a beat, she stated, in her Austrian accent, “This is not nice. This is nor-mal!” I still cry thinking about it. (As I’m doing right now.)

She was correct–it should be normal, but, unfortunately, it just isn’t. Rude is normal now, and that’s one of the biggest shames of this day and age. I love my friends in L.A., but that most of them don’t realize how rude it is to be chatting on the phone when they’re with someone or in public or in an audience, (including at my show!,) or texting, or reading, or whatever, is beyond me. And don’t get me started on what some people think is acceptable audience behavior!

So, I shouldn’t have said, “good for them,” about kids on a show respecting the judges. That’s what they should be doing! What they should not be doing is what many of the American Idol and America’s Got Talent contestants do. Which brings us back to the point of this column.

For those of you who don’t watch the plebian shows that I do, this is what I’m talking about. On American Idol, some of the kids talk back to the judges. And not really in appropriate places. One who did it right is this season’s Crystal Bowersox. She spoke intelligently and just explained herself sometimes, always thanking them no matter what. But others just responded rudely, thinking it shows some personality or something. Which, of course, it doesn’t. 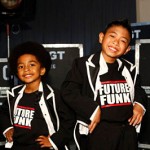 Then two nights ago, two little boys from Southern California, who do hip-hop and break dancing, performed. Originally, they were quite good and really adorable. One’s five and the other ten, and we all loved seeing their friendship, as well as their talent. (I think their moms are a tad negligent, though, to let kids that young spin on their heads. Really. I believe it’s quite a danger to their necks and spines at that tender age.)

It really was their weakest performance on the show (out of the three they’ve done,) and when one of the judges, Piers Morgan, who is known as a meanie and rightfully so very often, honestly critiqued it as not their best, they started pooh-poohing him and getting the audience to boo. They were giving him the thumbs-down and waving their hands at him (like to get away,) and were just generally rude.

They’re little children, for goodness sake! What about respect your elders? Don’t talk back? Take it like a man? You can’t encourage kids to be so rude!!! I don’t know where the blame lies, though. With their parents? The producers? The host? Society in general? Probably all of the above. It really does boggle the mind.

Then, as if that wasn’t bad enough, during the results show, Howie Mandel, another of the judges, proudly announced that he’s tweeting…during the show!!! How unbelievably rude!!! Is what he has to write to strangers really that important that it can’t wait till after the show, of which he is a big part, is over??? No wonder so many people are rude–they see examples of it everywhere, from parents and authority figures to celebrities to peers. So they think it’s okay. I just don’t get it.

I don’t need society to be like it was in some of the old movies I’m so fascinated with; I’m not looking for people to call each other “Mr.” and “Miss” or anything like that. But how about some basic manners and politeness? That would such a breath of fresh air. And let it start in public.

On a positive note, on the results show last night, Jimmy Fallon was hilarious doing quick impressions of other comics. I knew he was talented, but I never realized just how much. I really appreciated the laugh at this point in my life. And you know what–he was polite the whole time.