Trending
You are at:Home»TELEVISION»TELEVISION: EMMYS 2013
By Karen Salkin on September 27, 2013 · TELEVISION

Okay, by now, you’ve either seen last Sunday’s Emmys telecast, or read a zillion reviews of it. But now I’m finally here to break it down for you. [Note: We had technical difficulties with this site, or this column would have been published  earlier in the week. Also, this time, I put my observances of the arrivals after my thoughts on the show itself.]

I actually thought the show worked well enough this year. It wasn’t fabulous, but it wasn’t torturous either, so to me, that’s a victory. So, sadly for us, I have fewer complaints than usual.

Even though Mr. X thought that the section at the beginning where Neil Patrick Harris was sitting in a room full of televisions was brilliant, I thought it was pretty boring before Jimmy Kimmel arrived on the scene.

I loved that there were two surprises in the Supporting categories in Comedy. The voters chose working actors over celebs!

Did anyone else notice the strange way that Alec Baldwin walked on-stage? It was worse than the penguin walk. 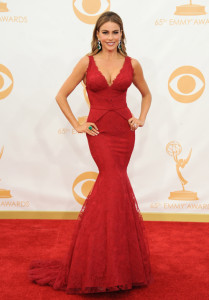 I’m so thrilled that Jim Parsons won. His speech actually choked me up a bit.

I was glad to see Michael Douglas out there because I just became a fan of his because of nothing to do with his acting, actually. It’s a sidebar, but here goes: I’m sure that by now, many of you know that I have been in torturous pain this summer because of my hands going numb. It’s much worse than that, but this is not the place to discuss that right now. But there are many times when I lose hope. So one recent night, while I was waiting for a show to come on TV, I caught the very end of one of the daily magazine-type shows. They were showing a few seconds of celebrities telling the best advice they ever got, and Michael Douglas said his is that if you’re sick, enjoy it because there’s not much else you can do. While I can’t quite enjoy what I’m going through, I do try to have a better mental attitude towards it now. So, he actually really helped me.

Only two out of the five Lead Actresses in a Movie or Mini-Series showed up! 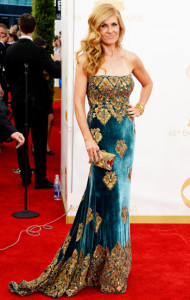 It’s amazing to me that you absolutely cannot tell how lovely Blair Underwood is by anything other than meeting him! He’s perhaps the nicest person in show business whom I’ve ever met, but when I tell people, they say that they would never guess that from his acting jobs. So I was happy when I saw him walk out to present, because I assumed his personality would shine through on that stage. But again, it did not, which I’m scratching my head over. So please, just trust me on this one.

To this point, the show seemed very quiet and calm. And it continued that way throughout.

Shemar Moore conducting uncomfortable backstage interviews was brutal. Mr. X said, “If you look up ‘fish out of water’ in the dictionary,…”

Diahann Carroll looked great, but didn’t seem to know what she was talking about, even though she was reading what she supposedly wrote! 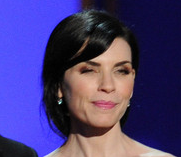 Look at that mess of a hair-do on Julianna Margulies. And the back’s even worse! She looks like she just rolled out of bed, while she’s sick with the flu. And this is how she showed up to present an award!

Julianna Margulies‘ hair looked horrible!!! It was a bad style to begin with, but it fell apart on-stage. The way it was pulled-back was like how I wake-up if I leave a ponytail band in overnight by accident.

There were lots of surprise winners, from the reaction of the in-house crowd, like Jeff Daniels, Bobby Cannavale, and an unknown named Merritt Weaver. While I’m happy for them, I’d like to know just who voted for them, if all the voters were so shocked???

I have no idea why Carrie Underwood was singing Yesterday to begin with, but it was bad, and totally unnecessary, and a waste of time. 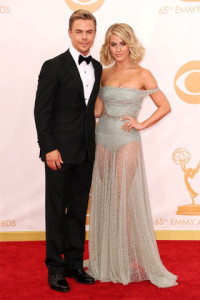 Fabulous best choreography winner, Derek Hough, and his almost as fabulous date, his sister, Julianne Hough. How jealous am I, of the whole situation? I couldn’t be happier for them, though.

My favorite category was Best Choreography. And I laud the producers of the Emmys telecast for not only presenting this category on camera, but for doing a big dance number to show all the people not in the know exactly why this category needs to be seen.

And while I’m in awe of all the choreographers, I couldn’t be happier for the winner Derek Hough!!! I’ve been saying for years that that boy is a genius, not to mention one of the nicest, most aware people I’ve ever met. His was my favorite win of the night!

Okay, I’ve avoided this topic long enough; it’s time to finally weigh-in on the In Memoriam controversy. If you haven’t read about it in recent weeks, (which I don’t even think is possible but…,) this is how this show presented the tribute to the people in the television business who have passed on in the past year: in addition to the usual presentation of the slide show of the recently deceased, the producers chose five people to receive their own special tributes, peppered throughout the show. The included were Jonathan Winters, Jean Stapleton, James Gandolfini, producer/creator Gary David Goldberg, and Glee‘s Cory Monteith. Left out, among others, were Larry Hagman and Jack Klugman. So, of course, that created some bad blood. Most vocal were the people who felt that Cory should have been left out since he didn’t have a body of work, had been famous from only one show for just a few years, and died of a drug overdose, as opposed to some natural situation. 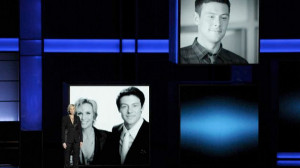 While I understand the point that the naysayers make, I feel that Cory is so current, as is his death, that they had to include him as one of the special tributes. It’s also a generational thing, and all these award shows are trying to court younger viewers in order to perpetuate the show going forward, so I respect the decision. Of course the easiest thing would have been to not single out any deaths at all, but what would an awards show be without an on-going controversy?

Now to my few thoughts on the walk-ins, which appeared to be a little less inane than usual:

First, the local crew of Sam Ruben and some really dumb blonde:

These two are exactly like the terrible morning show duo played by Cheri Oteri and Will Ferrell on Saturday Night Live. Really, exactly.

Sam Rubin thought he was being so profound by asking the interviewees if they were happy that their shows were going into syndication, (who wouldn’t be?!–duh!,) and if network dramas will be going away because cable dramas have become the way to go. (Or something like that—I’m paraphrasing.) So, to that effect, he asked Nigel Lythgoe, “Five years from now, will there be these traditional networks as we know them?,” to which Nigel answered, “I doubt it very much.”  Is he nuts??? Does he really think that in just five years we won’t have traditional television networks?! He better hope we do because otherwise his shows won’t be on anymore! I don’t think these people walking into award shows even know what they’re saying anymore. They’re just out there, thinking that they’re important.

But these two host idiots did something even worse than that. They were interviewing young Modern Family cast member Nolan Gould, who was wearing a cast on his hand. After they discussed it for a while, they insisted on signing his cast! How rude was that?! And obnoxious. They even noted that no one had signed yet, which is probably because he didn’t want anyone to sign, let alone two annoying strangers. That is honestly one of the rudest things I’ve ever seen during awards shows arrivals.

On top of that, they shook his cast-laden hand!!!  A cast means it’s injured, so don’t touch!!! How these two have gotten as far as they have is a mystery to me.

And Sam Ruben kept saying “pundints,” instead of “pundits.” OMG! He also mispronounced “repertory company” as “repertoire-y.” How does this man have a job in TV?!? And perhaps even more mystifyingly, why do I subject myself to watching them interview people twice a year? I do it for you guys.

The one positive I did take away from their coverage is that cute actor Diego Klattenhoff seems as nice and down-to-earth as I expected.

I guess blunt bobs are the hair-style for interviewers nowadays. For a lot of interviewees, as well.

I’m glad I wasn’t eating when one of the homely girls from Girls talked about the look on her face during oral sex, (I cleaned it up for you a bit.)  Ugh.  It even seemed to gross out Giuliana! Nice pre-awards show chatter.

Amy Poehler‘s ponytail was a mess.

I hate reporting this, because I like Carrie Underwood, but when she and Ryan were talking about that she’s going to star in a television production of The Sound of Music, and Ryan asked, “You’ve seen the movie many times, I assume?,” Carrie answered, “But this is the musical version.”  Did she think that the movie, of The Sound of Music, was not a musical version??? How dumb. [Note: She may have meant the stage version, but still…]

This annoying Giuliana says she’s “obsessed” with everything.  If that’s really the case, she should be committed already.

Why would Lena Dunham, who’s so unattractive to begin with, wear that hideous dress, horrible tattoos, and bad green make-up?

She and Claire Danes, who are old pals, had a good time talking together on Ryan Seacrest’s podium, which was nice to see. But they had not one good boob between them. I rarely comment on this, but those were two of the worst racks in Hollywood.

And on that charming note, I’m closing my Emmys review for 2013. But next week begins my coverage of all the fabulous Emmy suites that I was able to make it to, so please remember to check-out those columns for all the dish.