Trending
You are at:Home»TELEVISION»TELEVISION: DUETS
By Karen Salkin on July 19, 2012 · TELEVISION

Tonight is the season (and perhaps, series) finale of Duets. Shockingly, I haven’t hated it! I’ve enjoyed all four actual stars, (Jennifer Nettles, Robin Thicke, Kelly Clarkson, and John Legend,) and three of the eight contestants. (The three finalists, actually!) And the other five I enjoyed disliking. Their music, not even them as people, which is so odd for me. (I didn’t like them, mind you, I just didn’t care about them one way or the other.)

In case you’re in the majority of TV viewers who sat this one out, here’s a quick primer on the series: the premise was crazy—having the three judges who didn’t perform each number secretly mark the other performers’ duet partners. What’s to keep them from under-marking their opponents, and over-marking their own proteges? 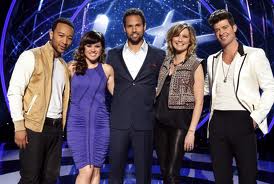 The mentors, with the host, whom I call Qu-douche, in the center.

Here are some of my random thoughts as the season wore on, not really in any order:

None of the judges/mentors will say anything really bad about a duet of one of the other stars because that would also go against the star, not just their contestant.  So, that judging system is just weird.

John Legend’s contestant, Bridget Carrington was having a rough time remembering her lyrics in rehearsal, and all they were is “Where is the love,” repeated a hundred times!  This is the lyric she had to bring in a cheat sheet for?

And Kelly told that girl there were a couple of pitchy parts.  A couple???  How about the whole thing!

Despite enjoying the show, I feel that they need to get a lot better contestants if they go for another season.

And, even though, as I already stated, I like the music of all four stars, I think that each season will need to have new ones.  This quartet blew their hits on the first show!!

And I wish they’d stop calling the mentors “superstars.” They’re barely even stars!

I never really liked Kelly before, but now I love her because she seems like such a nice girl.  And Mr. X was never a fan of Jennifer, but he finally understands the big deal about her now. She’s the best mentor by far.

Robin had to pick two chicks, (as opposed to dudes,) because every song he does is like, “hey, baby, let’s get it on.” I get such a kick out of him, though.

Does anyone know what happened to Johnny Gray, John Legend’s partner on the premiere?   He was gone by the second show, and the producers have been really mysterious about it.  At first, I thought that perhaps he had gone the Mario Vasquez route, and got ahead of himself.  (Mario’s the guy from American Idol, Season 4, who made the Top 12 and then suddenly quit.) But then I heard that the show dumped him, for some mysterious reason. And, with a whole internet available nowadays, I still can’t find-out what really happened!

And the host, Quddus, is aptly named if you pronounce his name Qu-douche!  Just watch his throws to commercials, where he acts like he just did something spectacular.

Jennifer and Robin sang a great showcase duet together because they both act like they’re about to have sex with whomever they sing with.

Robin’s voice is too thin and particular to duet with most people. He’s best on his own.

His singer, Olivia Chisolm, was brutal. And did you notice she looks like Heckle? Or is it Jeckle?

And Bridget looked right when she dueted on Unforgettable with John, but what came out of her mouth was awful.  And she sang “unforgettabow.” She didn’t even attempt to put an “l” in there at the end. Her bad singing was even throwing John off, which I can’t imagine is easy to do!!!

That’s it; I have to go rest up for tonight’s final. All three males left are good enough, so I’ll be fine with any of them winning. John is the best singer, Jason is the cutest, and J Rome (all “J” names; hmmm,) is the best performer. (But I wish that last guy would stand up straight already! Perhaps he should read my posture column from last week! Here you go, J Rome: www.itsnotaboutme.tv/news/2012/07/12/miscellaneousbeauty-posture)

P.S. I hope they have the Final 3 sing a triplet together! That would be fun, and a great way to really compare.