Trending
You are at:Home»KAREN'S MUSINGS»TELEVISION: DANCING WITH THE STARS–SEASON 14!
By Karen Salkin on March 23, 2012 · KAREN'S MUSINGS, TELEVISION

These are the notes I took while watching the season premiere of Dancing With Stars at the beginning of the week. They’re not my usual in-depth observations, but I’m so busy reviewing events in New York for you guys that I didn’t have time to write more. So, these are straight from the horses mouth. 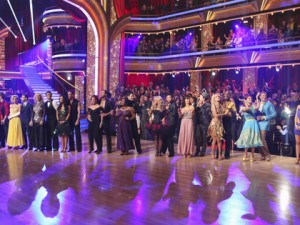 I almost can’t watch this show anymore.  The idiotic fake banter, the stupid tweets, co-host Brooke Burke always pronouncing “dancing” like a Brooklyn person–it’s all too much for me.

Maria Menounous said that her pro partner, the adorable Derek Hough, whom she was super-lucky to be assigned to, “kinda taught” her to dance. I was watching with my east coast associate, Sheila, who was appalled and retorted, “He kinda taught you??? He kinda carried you!” And when Tom Bergeron told Maria she coped with the dance well, or whatever, Sheila added, “Coped is all she did.”

I’ve somehow always known who Jack Wagner is, but I’ve never actually seen or heard him before. He seems darling enough. He’s like an older handsome man. But his goony music and wardrobe don’t help. His was an overall douchey routine.

Footballer Donald Driver’s pro partner, Peta something-or-other, made their dance too about her. We never watched Donald, though we meant to.  It was comprised of semi-simple steps, that looked fancy.

Did Karina Smirnoff have another nose job??? I think that would be her fourth! And why did her celeb partner Gavin DeGraw keep his hat on again??? It’s like a country star who keeps his cowboy hat on always. Gavin must be bald.

We, the viewers, don’t care about tweets, especially from non-celebs. And flashing them on the screen is just distracting. And desperate.

I think that Chelsie Hightower’s unnecessary nose job changed her voice! For the better. Or she taking voice lessons?

I threw-up a little when I saw repulsive Sherrie Shepard in a tight skimpy dress. Or at all.

Was Maks dancing with someone? We didn’t notice. My friend and I were OMGing the whole time over Maks. And he does seem to love those older women. So maybe I do have a chance!

The Spanish guy was cute and good. But in hi-def, we saw Cheryl’s back fat!!! I could have lived without that!

I love Martina Navratolov. She’s the nicest, most honest person on there!!!! I met her a couple of times in Aspen, and she’s the same in person. And she looks great with make-up! I’m rooting for her. But she said, “I’m not that feminine.” That???

Katherine Jenkins is so pretty. And too classy for Mark Ballas, who once again out-danced his partner. They were excellent, but the judges’ nines were tad high.

They saved the only real star for next-to-last. Gladys Knight. And she was great, happy, and crisp. And her adorable Irish partner, Tristan, featured her with his choreography, rather than hiding her with himself. Sheila said, “She was the only one who had any dance in her.”

Jaleel White seems like a really nice guy. And his dance was crisp and fabulous! He got, and deserved, the most points. He’s adorable, in a weird way. But his partner Kym Johnson’s face is almost unrecognizable with all the surgery she’s had over the course of her time on the series. I like her, but I hate that she always says everything’s “amazing.”

I love that no one failed on this first show of the season. Maria Menounous was the worst, actually.