Trending
You are at:Home»TELEVISION»TELEVISION: DANCING WITH THE STARS–SEASON 13–WEEK ONE
By Karen Salkin on September 21, 2011 · TELEVISION

DANCING WITH THE STARS–WEEK ONE

As I said during my guest spot doing celebrity gossip on the internet radio show Daytime With Donna, on the day that I was announced as the winner of the Best Celebrity Gossip Correspondent competition, here’s what I think this season of Dancing With The Stars will come down to, which will be most interesting: 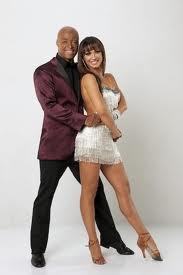 Pro Karina Smirnoff and her partner, frontrunner J.R. Martinez, will be in the finals with her ex-fiance Maksim Chmerikovskiy and his partner, athlete Hope Solo. Which means they’ll have to do the post-finale press tour together in close quarters, with only one other couple around. It appears that they don’t talk to each other, judging by all the shows since they broke up, and never even politely hug each other during eliminations, like everyone else does. The whole last week or two of the series this season will be so uncomfortable to watch, and for them to live, if I’m correct. Wish I could fast forward to November right now!!! So, everyone, please keep voting for those two, just so we can watch the results, like a lab experiment!!!

I don’t like one of them going home after just one dance.  I know it depends on the network schedule each season, but it’s just not fair.

I wish that Elisabetta whatever her name is had been the one eliminated first last night, except I would have felt awful for her partner, Maks’ brother Val, who’s waited about a decade to get on the show. My second choice for elimination was that obnoxious Kardashian guy, but I was still fine with my third choice, Ron Artest, being the one to get the boot. He would have probably been entertaining as the weeks went on, but he can’t dance! And it always seemed like someone at the show was trying to get his pro partner, Peta, on the show, which I found that to be annoying. I won’t miss her.

So, here are my observations of the first competition from two nights ago:

Brooke Burke has added her husband’s last name…for now. I guess she’ll change it back when they inevitably break up due to her success.

And, doesn’t it look like she’s had some face work done? I wonder if she went to her ex-husband, plastic surgeon Garth Fisher, to do it?

I have nothing against Chaz Bono, and actually applaud anyone who’s brave enough to transgender. I can’t imagine the hell those people go through. I haven’t even been brave enough to get a nose job!!! But it’s weird to me that fashion and beauty icon Cher wound up with a son instead of a daughter and he’s not even attractive.  And he has Sonny’s voice!!!  Which is weird since Cher’s has always been the deeper one.

Ron Artest can not dance.  And how does he have a sticking-out stomach?  He does have the distinction, though, of being the first active NBA player ever to compete on the show, which is due only to the lock-out so far this season. The guys are usually playing at this time, so they can’t appear anywhere else. Guess Ron, or Metta, his new name, will have a lot of time on his hands now.

What a primarily douchey cast.

I hate to admit it, but Rob Kardashian had a joy about him, and gave it his all.  He was actually not painful to watch, like Ron was.

There was no reason to redo the studio. Why make the contestants have to go up all those steps after they just worked their asses off dancing???  And the other competitors have to look down on the ones in the spotlight. Just an uncomfortable floor plan overall.

What was Mark Ballas’ hair doing???

As usual, Mark out-danced his partner, which Derek Hough would never do. I’ve never disliked Mark, like so many commenters do, but I think I’m finally joining them this season.

I’m thrilled for Tony Dovalani to finally have a quality partner in Chynna Phillips this season!  After creepy lummox Kate Gosselin and even creepier, more lummox-y Wendy Williams, he deserves Chynna. 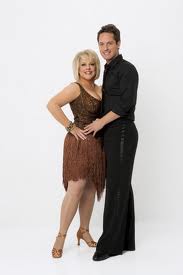 Nancy Grace was so much better than I expected, (although also much shorter and fatter than I expected,) especially after seeing her rehearsals.  The judges didn’t give her enough credit.  I still don’t know why she would put herself up for this, though.

Her Irish partner, Tristan, I think it is, appears to be an adorable guy.

Carrie Anne was impressed by the body contact of soccer goalie Hope Solo and her pro partner, the sexy Maks.  Who wouldn’t have contact with that body of his???

The music each duo gets makes such a difference.

Anna choreographed a perfect dance for nutty, (in a good way,) Carson Kressely. 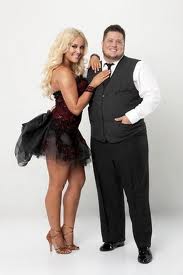 J.R. Martinez–talk about making the best of a bad situation! What an amazing guy.  How can you not root for him?  But he was the best once out there, fair and square.

As usual, Derek made his partner look great.  He’s not there for flirting or fun and games. And Ricki Lake told him thank you immediately, which I loved seeing. But I am rooting against him this year because I want J.R. To win. Or at least, Maks.

They saved Chaz till the end for the people who tuned in solely out of morbid curiosity.

Chaz actually has his mom’s rhythm! (Take it any way you like.)  And he does look like a guy.  I give Lacey Schwimmer tons of credit for acting totally normal with him, like she would with any other guy. You go, girl!