Trending
You are at:Home»TELEVISION»TELEVISION: DANCING WITH THE STARS–SEASON 11!!!
By Karen Salkin on September 22, 2010 · TELEVISION

Okay, I fought it for a day, but I must weigh-in on the new season of Dancing With the Stars, though I choke on that last word, in this case, since very few of them are indeed “stars.” 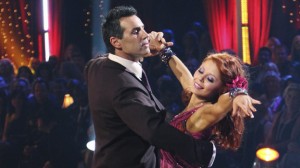 Kurt Warner is the only person on there who ever labeled the people who are competing, including himself, correctly. He said, “the other contestants” at one point, and that’s what most of them are–contestants, not celebrities. It’s kind-of like watching Biggest Loser–we get into the participants and call them by their first names and assess their goodness or badness, but we weren’t familiar with them before their stints on the show. That’s how I feel about this season’s crop of dancers–they’re not “celebrities,” per se–the show is making them into celebs. You can take a dozen folks off the street, and the public would be just as interested in them. It’s sad, but I guess the masses are basically voyeurs.

That being said, Mr. X and I were actually pleasantly surprised watching this week’s debut shows. I almost gave it up this season when there was nobody to root for, no one I was interested in spending time watching, and about half I’d never seen before and a few I’d never even heard of!

But I’m glad we tuned in. We got several guffaws out of the first show, and I actually forgot all my problems for those two hours! More from TV one cannot ask.

There was actually not even one contestant I hated! The chick in the yellow dress who went first who I have no idea who she is was the only real waste of time, and the chubby kid from a Disney show is the new King Obo to me. (Most obnoxious person, for those of you who aren’t yet used to my lingo quirks.) 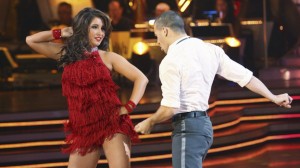 Bristol Palin, rocking one of my old numbers, with partner Mark Ballas.

I had never seen “The Situation” or Bristol Palin before, and found them interesting. Bristol doesn’t seem to be anywhere near the imbecile her infamous mother is; rather, she seems like a sweet girl to me, to whom I give a million props for participating when she’s far from a celeb. I thought she did a charming dance, wearing a red fringed dress that’s the child of several of my own favorite wardrobe pieces.

The Situation was only a tad amusing, and that by accident, as most Jersey guys are, but it was interesting to see him in action. I had read about his abs before, so I was surprised to see how physically unattractive he is. He has a weird body, the worst pigeon toes I’ve ever seen, (I seriously have no idea how he’s going to dance with those puppies,) and his face looks about 45-years-old. There’s no way that guy is only 27. No way. Look at his forward. But he proves my theory that America will watch just about anybody who’s put in front of us.

Mr. X asked me for whom I’m rooting, and really, the answer is nobody. I feel bad that Karina, my favorite female dancer, (I seem to be alone in that, though,) got saddled with The Sitch, while her ex, Maks, got probably the best one, Brandy. I want them both to be around for several weeks, in hopes that they’ll reconcile. They were one of my favorite couples, and believe me, that list is short.

Kurt Warner is my favorite contestant, so far, and I’m glad because I’ve always liked him. He and Bristol seemed to be having the most fun out there, and that was nice to watch, as opposed to the stiff-as-a-board Michael Bolton. I’ve honestly never seen anyone that cardboard before. He made me completely uncomfortable, and should have definitely been the first one eliminated. 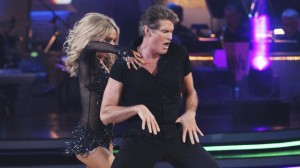 I can’t believe I’m saying this, but I was actually sad to see the Hoff go. He handled it the best I’ve ever seen anyone do who was the first to leave, and he was correct in his attitude–after all, this is just a silly dancing competition for non-dancers. Period. The ones who act like they’re going home will alter life as we know it are just too self-centered for me. (BTW–David Hasselhoff didn’t need this show, as most of the others do who aren’t really yet famous and want to further their careers. The only upside for him was that he showed us non-fans how pleasant he can be. I can see now why Germans love him, if this is his regular attitude.)

Just a couple of more thoughts here: one is that I think the participants should each get two weeks guaranteed, and have the eliminations start then–the rehearsal process is just way too much to go through to get to perform only one dance.

I don’t know why, but I’ve just never liked Rick Fox. Perhaps it’s because he looks like a caricature of a handsome man. Or left Vanessa Williams. Or was a Laker. But I sure admired his posture when he danced!

And what was up with Maks’ secret behind-the-back hand grab of Bristol as they took their places for the final showdown last night??? Even as a Republican un-wed teen-age mother with a fact-challenged mom, she’d be a definite improvement over his last paramour, the creepy, nasal Erin Andrews. So, you go Maksol! Or would their moniker be Brismak?

And why did Kym Johnson and Karina Smirnoff feel the need to have off-season nose jobs, the second for Karina? The former didn’t really need one at all, and the latter definitely looked better with her big-ish nose–it fit her face better.

One final note: I could not wait for the producers to replace Samantha Harris as co-host last season. She was just downright awful, a sentiment shared by just about everyone who commented on message boards everywhere. I knew nothing of Brooke Burke except that she was a former contestant on this show and had hosted something somewhere. But she’s terrible, too, in a different way. She’s completely devoid of personality and has nothing to ask the current celebs. She comes up with the most banal questions that require nothing more than an obligatory one-word answer, then sticks the mike in the interviewees faces, and leaves it there!!! And doesn’t listen to a word they say, to be able to follow-up. She’s neither quick nor clever, and it’s time to replace her, as well. But I’m glad she’s there this season because, with no dancers to hate, Brooke fills that bill.