Trending
You are at:Home»TELEVISION»TELEVISION: DANCING WITH THE STARS CAST–SEASON 11
By Karen Salkin on August 31, 2010 · TELEVISION

DANCING WITH THE STARS CAST–SEASON 11

I promise that all my Emmys columns will be up this week, but I just saw the list for the new season of Dancing With The Stars, and I must weigh in. ENOUGH ALREADY!!! There are no “stars” involved! Why don’t they just re-name the show Dancing With Some No-Talents Who A Few People With No Lives Of Their Own Have Heard Of??? 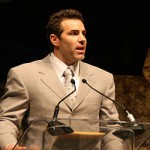 Former footballer Kurt Warner, the only new cast member I even slightly care about.

The show is now just plain crap. It’s been going downhill for quite awhile, but it’s a joke when every single one of the professional dancers is more famous than any of their supposedly famous partners!!! The Situation, (a phrase I’ve been using for years, I might add!,) Audrina Patridge, (someone I’ve never even laid eyes on and have no idea what she does,) Rick Fox, Margaret Cho, Kyle Massey (another one I’ve never heard of even one time)–these are “stars???”

And Bristol Palin. Just how is she a star? Because she got knocked-up as a teen-ager and has a mother who kills moose??? That’s what makes someone a star by today’s standards? So, what are Brad Pitt, George Clooney, and Julia Roberts? The new cast shows exactly why this show can’t get any real celebrities–because it’s become so low-class that no one who’s really a star wants to do it anymore. The cast members of recent memory go on Dancing… so that they can then get a career; they’re not on it because they currently have one.

I feel awful for my little mother, who used to love the show. Now she describes them by what they look like because she doesn’t know their names! Guess what, Ma? No one does! They need to stop wasting our time. (At least she’ll get to see someone she likes, David Hasselhoff, to whom she refers as “the handsome man.” I don’t have the heart to break the news to her that she’s pretty much alone in her evaluation of him.)

I know, I know–I don’t have to watch if I’m not interested. But, since I’m such a fan of dance, in general, and there’s not too much of it on the tube, I tune in to see the excellent choreography and pros. And just try to not let my blood boil too much from the inanity of it all.