Trending
You are at:Home»TELEVISION»TELEVISION: AMERICAN IDOL—SEASON 13
By Karen Salkin on March 20, 2014 · TELEVISION

In case you missed yesterday’s column, I’ve decided to give each of the three talent competition shows I watch their own write-up.  (If you missed it, you can read yesterday’s Dancing With The Stars thoughts here: itsnotaboutme.tv/news/television-dancing-with-the-stars-season-18.)

Today is American Idol‘s turn for a true Karen rant.

This has been the worst season of this inanity ever! 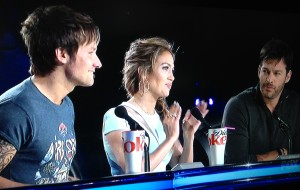 I like this judging panel best, (because they’re amusing, seem to really get along great without any histrionics, and at least Harry Connick, Jr. is honest in his brutal assessments of these mainly no-talents,) but host Ryan Seacrest is more full of himself than ever, and I’m so not interested in any of the contestants.

Sure, I really do enjoy unique-persona Alex, and Caleb can also sing and seems nice, but that’s about it.

So, here are my thoughts on the season so far, as they came to me while I’ve been watching the live shows:

They should just change the name of this show to The Hunger Games.  As if Hollywood Week wasn’t rotten enough, they’re more evil to the contestants than ever, making the kids sit on-stage all night during the “Top 30” competitions, instead of rehearsing before they go, or ruminating after. And why would they get thirty people there, all rehearsed and excited, and then let only twenty of them compete??? How cruel can they be?!

And on those particular live shows, they said they would be choosing the ones to sing that night based on the rehearsals they had seen that day. But everyone was awful, and they sort-of told them so, so how could they have chosen them from that day? The whole process stinks, in every which what way, (as my first talent manager used to say.)

Not one of these top thirteen, or beyond, would make it onto The Voice!

These are the thirteen best undiscovered singing talents in America??? Shameful! They saw hundreds of thousands (if not the millions they always claim) of people, and this is the crop they got?!

Enough with the extreme close-ups of their bad teeth and rotten skin!  And what about the butt shots?! Are they really necessary? They don’t want their big booties seen, nor do we the viewers, want to see them!

Speaking of their butts, why do the judges always blow smoke up them?

I really like Jennifer Lopez, and I appreciate that she tries to be nice to them, but we need much more honesty.  At least Harry Connick, Jr. tries to tell it like it is. 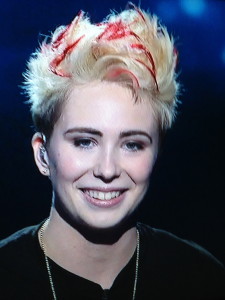 Contestant MK. The make-up artists did a great job on her face, but can someone please whiten this girl’s teeth already??? Photo by Karen Salkin.

Couldn’t they give these people some teeth whitener??? How hard could that be? (A teeth whitening company I know is on call backstage at DWTS, so why can’t Idol spring for a similar service?)

Why does the idiotic audience scream with glee at absolutely nothing?  I know they have signs in the studio for them to do so, but they each have free choice of whether or not to be an idiot.

And what did Randy Jackson threaten to sue them with, that made them hire him as the “talent consultant?”  His consultations usually consist of, “Good job, man, good job,” and, “That’s what you’re going to sing this week?  Okay.”  In-depth, eh?  I’m sure the kids are learning a lot from him.  Not!

How can you tell viewers to call at the beginning of the show, before we see the performances??? How unfair and stupid. The producers just know that people will tune-out when they hear this banality, so they’d at least get the votes first, so they can announce how many votes they got, so they can flog their own hogs. It’s interesting—last week, Ryan Seacrest proudly announced that they received something like seventy million votes. And then, a day or two later, the ratings came out saying that only nine million people had watched the show!!! That’s just so deceptive. (At least they finally put a cap on the number of votes per method per person. It’s about time!)

The rude judges are always talking during singing. Maybe they can’t stand to hear them, either. But why are they deliberating, (although it’s all fake,) while the possible-eliminee is singing at the end to win their one “save?” Don’t they want to hear what they’re going to deliberate on? The show dramatically, (and disgustingly,) calls it “singing for your life,” so don’t they care about these kids’ lives??? 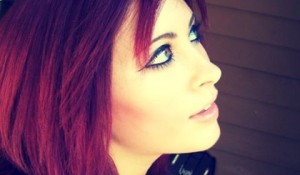 Seriously, Jessica Meuse looks like Vivien Leigh, especially in the nose and eyes. I don’t have time to look for a better pic to demonstrate that now, but I will change it later. Can you see what I’m talking about, though?

Jessica Meuse looks like Vivien Leigh. I’ve rooted for her all along, because she appeared to have had a somewhat hard life, and she’s really pretty, too, if you look beyond the pink hair and tramp make-up, (the latter of which I applaud, by the way,) but I’ve come to realize that she can’t sing very well.

Worst group ever. (Have I mentioned this yet?) Maybe that’s why the ratings are so low.

I like Dexter—he makes us feel comfortable. He usually hits the right notes. He doesn’t try to be anything he’s not, and I can definitely see him being a big force in country. And he’s a nice guy. I’d be fine if he won.

[I wrote everything above prior to last night’s episode. Now here are my latest thoughts on this most recent snoozefest:]

I’m impressed that they made MK look that good, except for her yellow teeth.

But her singing is a snore. Her performance last night of Pink’s Perfect was like someone singing in a fifth grade class.

Mr. X observed that the judges are so deferential to her. Maybe that’s because she seems so mentally and emotionally fragile.

OMG–Jena–what a schlep Get a load of that muffin top!!! Photo by Karen Salkin.

Actually, this whole group looks too freaked-out. The only one who seemed to have any comfort was Ben Briley. And he’s gone.

Good observations from Harry re: Dexter’s song: “Bereft of joy, I felt like you were meandering.”

I hope the kids appreciate all the great free advice they’re getting from the judges.  No other season had this many good lessons for them. (That’s because the judging panels usually had no singing abilities themselves!!! Yeah, I’m speaking about you guys, Simon, Paula, and Randy!)

Jena was so nothing special. She can sing well enough, but that performance of Clarity last night, that she thought was so great, was not.  Even her biggest booster, JLo, could not force herself to be effusive about it. And her outfit was gross; it was trying too hard, piecemeal, ill-fitting, and featured her pathetic muffin top. And, for goodness sake, stand-up straight, honey!

Please make them stop shooting up Malaya‘s oh-so-unattractive nostrils!  (It’s not her fault that she has ever-glistening nose-holes, but the cameramen don’t have to share them with us.) 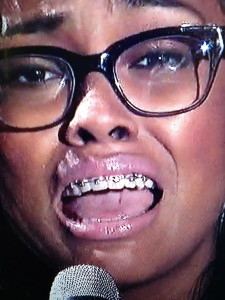 Malaya’s always-wet nostrils. There are much worse shots of them, but I didn’t want to be cruel to her, like the camera people are! Photo by Karen Salkin.

Caleb, whom I actually like, said, “Me and my fellow cohorts,” which is doubly stupid.  *[I’ll explain at the end, if you really don’t get it.]  Please–everyone–stop being illiterate!!!

CJ seems like a nice guy. But he absolutely cannot sing. At all.

Judge Keith Urban told him about some performance element, “I’m really encouraging you to work on that because you have everything else going for you.”  But he can’t sing!!!!!  And, in case people have lost sight of this fact, this is a singing competition.  Yes, we all originally rooted for CJ because he’s a poor country boy who’s polite, but that’s it.  It’s enough already.

And so is this review.  I’ve already wasted enough of my time on this awful show.  They should just send everyone home right now, save for Alex, Caleb, and Dexter, and have them finish in that order.  Period.  And then let them all fade into the obscurity that most of the past contestants, and even some winners, have already been relegated to.

In the next two weeks, I’ll finish up with my musings on The Voice.  But I saved it for last this time because I have the least negative things to say about it.

*[It’s doubly stupid because, firstly, no one should ever say, “Me and…”  The correct usage is “So-and-so and I.”  If you learn nothing else from me ever, please learn this lesson!  Can’t people who say it hear how wrong it sounds???  The second part of the stupidity is that Caleb said, “…fellow cohorts.”  “Co-” means “fellow!!!”  OMG!  Forget vocal coaches–American Idol needs plenty of English language coaches!!!]