As most other American Idol fans, I, too, approached this season with skepticism. Not much, but some. I did feel that the search for great singers would continue on well enough, even without the great Simon Cowell, but I figured it would lose some fun when he left. 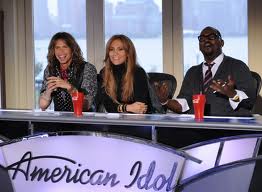 Rather than giving you my thoughts the second Season 10 debuted, I reserved my written judgment until now as the first round of auditions has neared the end. But my opinion hasn’t changed since the first show with new judges, Jennifer Lopez and Steven Tyler, joining forces with the one returning judge, Randy Jackson, who’s never had anything original to say.

Well, no surprise, Randy still repeats at least half of what others say, but he also is trying to be meaner, to make-up for Simon’s loss. It just makes us miss Simon even more, I’m afraid.

But, the great news is that JLo and Steven are wonderful! I love them!!!

Jennifer catches so many nuances–she’s surprisingly aware. She’s darling, lovely, nice to the contestants, and adorable to look at. I’ve always liked her, though no one else I know seems to, but I appreciate her even more now.

I never knew anything about Steven, and am not an Aerosmith fan, (I don’t dislike them; it’s just not my type of music,) but now I love him! He tells them the kids they’re good on some level, even when they’re not, so as to not hurt their feelings. And, the guy can actually sing! The first one ever on the panel who can actually do that!!! What a concept–a singer judging a singing contest! How come no one’s ever thought of that before???

One more great thing about Steven is that he’s so musical, he just wants to sing all the time, it seems. So, he makes the audition feel special when he chimes in with them, even if it’s just drumming along. He makes everything easier for the kids and more fun for the viewers.

The best part of this season is that our time watching the show is no longer wasted with Simon and Paula’s boring “relationship” shenanigans, Kara’s affected lisp and use of the word “artist,” and worst of all in the “waste of time” category–Ellen’s non-comments and constant reach for comedic observations. In recent years, the producers made the show more about the judges than the contestants! So, yay to all of those being gone from this series this season.

But, what they did lose with Simon’s exit, besides his often brilliant caustic wit, is the ability to whittle down the numbers of hopefuls they put through to Hollywood Week. By audition show #2 this season, it seems they had already exceeded the usual number and they had five more audition cities to go! Most of these people just aren’t that good.

I actually transfer parts of some of the shows to DVD for my little mother to see later on, in case she’s missed them, but when I do, my back is to the TV and I’m not watching it, but I still hear the singing. So, it’s a truer test of just who is an excellent singer and who isn’t. I’ve been really surprised at just how not special most of them are when it’s just the sense of hearing coming into play.

And so far, not that anyone can ever come close to Adam Lambert for me, but I haven’t even heard any Carrie Underwoods or Ruben Studdards so far. Some are good, but there’s no one I’m really excited about yet, or am even looking forward to hearing again. I’m sure that will change, and some, like the young girl who asked Steven to duet with her for her family, and the handsome cowboy who’s already had a record out several years ago, have potential.

With the judges staying out of the way this go-round, I’m willing to hang in there more than ever and see what develops.